A butterfly will still be beautiful

A butterfly will still be beautiful 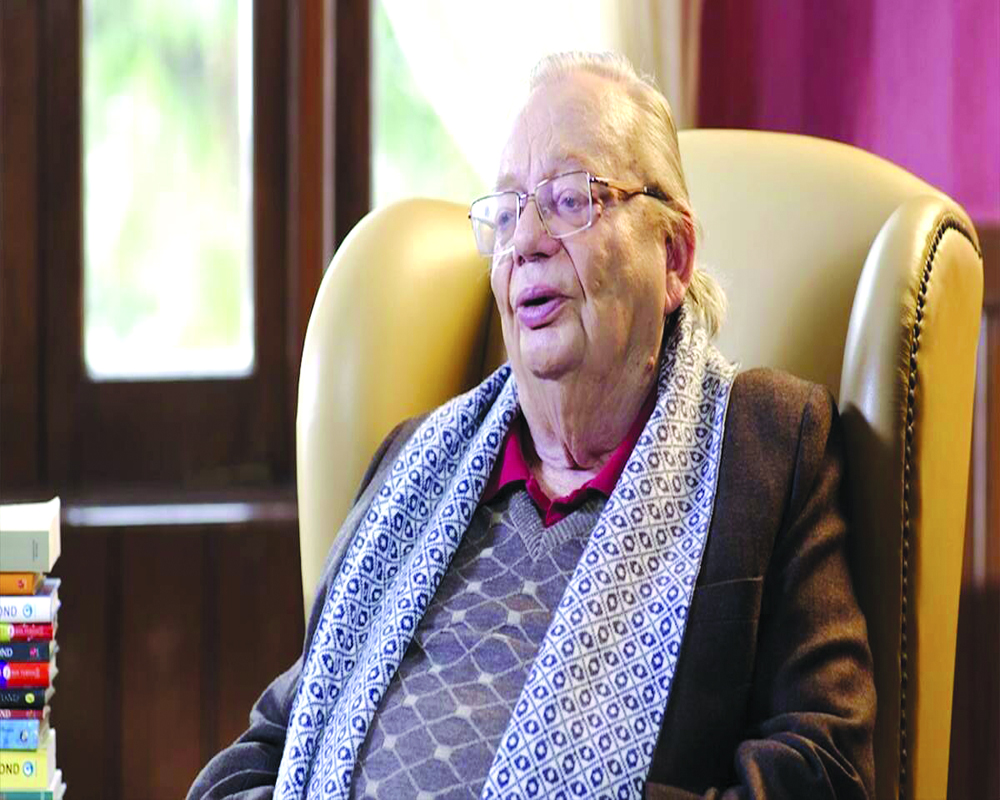 ‘I think I used to be a romantic at heart, now I am a realist’, ruminates legendary writer RUSKIN BOND, in a tête-à-tête  with Khushbu Kirti

There are those days, when you’re a nerdy kid reading Delhi Is Not Far and you’re laughing at the little anecdotes when you suddenly start imagining that you’re talking to the author of the book that you’re perusing. You start, in your little head, framing what you’d want to know about the world of reading and writing by the maestros. No? Just me?

Well. That happened. Might I add, not that it wasn’t clear already, that it was a huge deal, an honour for me to converse with one of my biggest idols. I don’t have to specify how we’ve all grown up reading short stories by Bond (now that sounds even cooler on him). I wanted to ask him so many questions but time was limited, of course. However, one always wonders... A writer, as legendary as Ruskin Bond, who carries a plethora of experience in his store, who has lived the most important movements of the Indian literary world and has seen from Progressive writers to the Chayavadi poets — what would go in his mind?

“I’ve been writing for 70 years and, you know, writers come and go,” Bond chuckled.

In his soothingly gruff voice, he continued, “There was not a particular era, per se. Some of the writers reflected the times they live in, in their writings. Some reflect the society in their works — between the two world wars, Independence struggle, partition, and so on. R K Narayan and Mulk Raj Anand, for instance, in the colonial period, have spoken of those times.”

“Now, of course, we have a lot of new writers who’ve grown up in independent India,” he added.

On asking him what changes he had noticed in the contemporary writers, he cogitated, “Now, many writers publish works in English and regional languages. I’ve seen more people want to write. When I went to school in the 1920s, there was no great interest in becoming a writer by profession. We didn’t have publishers then, either.  Only in the 1980s did we start having genuine publishing industries, so now we have more and more writers wanting to make a living out of writing.

Young people want to write, now people want to become celebrities through writing. That could partly be the attraction. In my time, we didn’t have visual media so writers were only known by their names. Nowadays, anyone can be a celebrity.”

This reminded me that in one of his novels, Bond had mentioned ‘this world is for publishers, and not writers’.

He paused before answering, “Yes, and I wrote that in 1960s. I was young (laughs). Now, publishers are dominant, have gone multinational, and have become commercial. In the past, small publishers often looked at good quality.

Now everybody works on a big scale. Publishers also take up big names. So, it is not so great for an author who is good but writing on a small scale. Although there are more publishers today, writers still face same problems.”

On the same lines, the declaration of death of the author by the post-structuralists is old news. On asking for the veteran writer’s  opinion on who occupies the center of totality in today’s literary world, he responded, “Today’s literary world is hampered by political conflicts that affect the entire world. Writings have become transient in nature. A lot of things are happening in the world. A lot of works, thus, get outdated quickly because current events are very transient.”

Bond, who has been recognised by the Indian Council of Child Education for his contribution to the growth of children’s literature in India, does believe, however, that children occupy a large readership and could be considered the center. Also the reason why he takes pleasure in writing children’s books.

The Padma Shri and Padma Bhushan awardee tittered when I asked him if he considered himself a romantic at heart. “Yes, I believe you’re right. But more so in my 20s and 30s, now I have edged towards realism more. I have become a bit like Hardy (Thomas Hardy).”

Bond had once written the most beautiful of quotes — And when all the wars are done, a butterfly will still be beautiful.

There have been so many interpretations of the same. I feel he wants to say that after all the negativity, one would come back home to positivity.  And so, I asked him if that was the reason why stories are important to him. Since, no matter what, fairy tales and fables remain evergreen and beautiful because they remind one of a great childhood and past.

In response, the Sahitya Akademi Award winner explained, “Yes, that is 100 per cent true. Stories are extremely special. And I am not only talking about writing... I have been an avid reader and have spent my life reading more. More than a writer, I am a reader. Just last week, I stumbled upon some stories by O Henry, the American writer. And those stories are so fresh, you know. He talks about all walks of life... You can’t live without stories.”

While writing poetry, I reach what William Wordsworth called  the ‘moment of transcendence’. Since Bond has been writing regularly throughout, I wanted to know if writing had become like meditation for him.

“Oh, yes, definitely,” he chimed in. “It’s something I try to do every day early in the morning. Writing is a passion for me. If I stop for even two or three days, I would start wondering if something is wrong with me.  I hope I continue this.”

Bond was one of the speakers at the Tata Literature Festival Live this year. As Bond sweetly adds, “Jai Tata Lit Fest ki!”