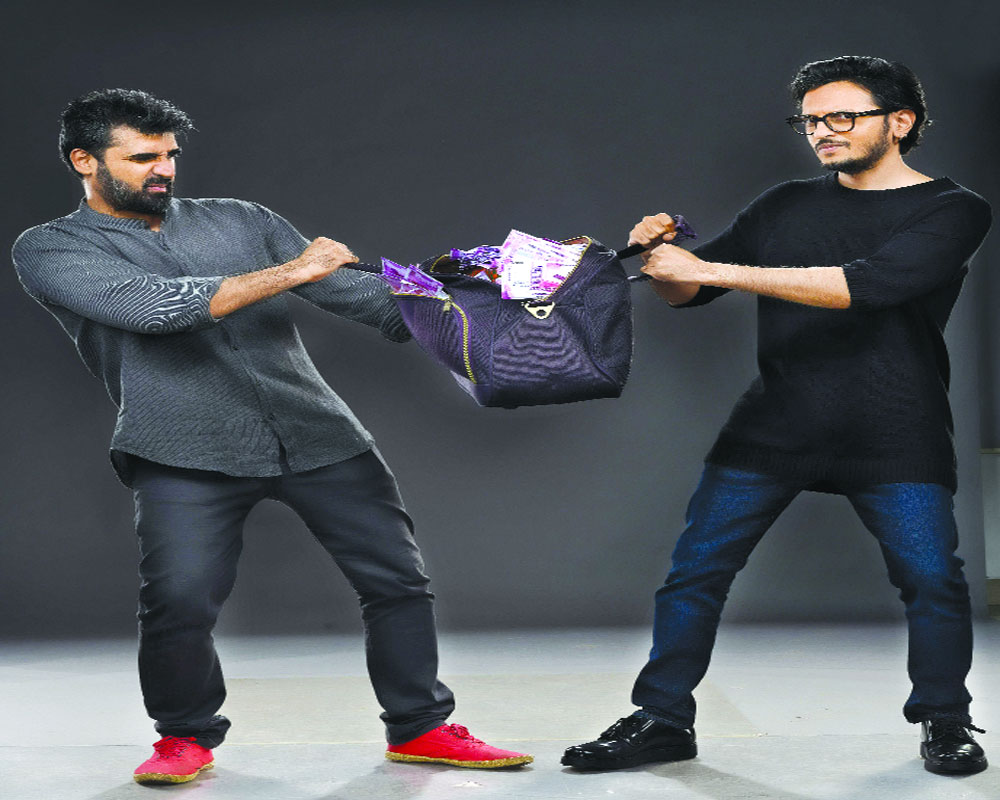 ‘We wanted to take people back to that time (of demonetisation) and remind them that we all got past this together’, director RISHAB SETH and producer VISHESH BHATT define the thought behind their recent drama-comedy, Cash, in a tête-à-tête with Khushbu Kirti

With the recent release of the film Cash, my mind was transported to the time of demonetisation in 2016, and how we had toiled in long lines in front of ATMS under scorching heat. The memory might be a bitter-sweet experience etched in our brains forever, but Cash definitely held my attention with its relatable and humorous take on it.

Cash, starring Amol Parashar, Smriti Kalra, Swanand Kirkire, Kevin Dave, and Gulshan Grover, started streaming on Disney+Hotstar. The light-hearted dramedy that centers around the period of demonetisation and entrepreneurship in India, is directed by Rishab Seth and produced by Vishesh Bhatt.

Read on for excerpts from a heart-to-heart with Vishesh and Rishab.

Demonetisation was a very serious event, something that has been lodged in the recent history of India. What is your vision of the film? What do you wish to convey?

Rishab: Demonetisation was, obviously, a very important event in our recent history that we’ve all dealt with — I think we all have memories of that period — which we, sort of, wanted to laugh at to create some kind of catharsis or nostalgia. Many might say it was a terrible time, many people feel that it was a very petulant move by the government. Ah, so, we never really wanted to pass judgement on it and our stance on it, even today, remains very neutral. But, we thought that there is an opportunity here to take people back to that time and remind them that we all got past this together and these are the things that unfolded around us. And when you go back in time — even if you thought that it was dark time then — you can always, in retrospect, laugh it off. So, I think the idea here was to use collective consciousness and evoke laughter instead of pain.

Vishesh: Like Rishab added, it was an important event and every important event always has certain serious takeaways, but the subject itself, or any serious event, for that matter, can have a humorous takeaway, too. Personally, we have to take things in a stride. Humour is an important part of life and I feel more than demonetisation, this is a journey of a serious entrepreneur and how strong the resilience of the medium and small enterprises in India, even today, during the pandemic is. They are extremely agile, take up challenges and manage to survive. We wanted to give that kind of a message that India is able to withstand the obstacles that come their way. It is, in a manner, inspirational, and also relevant to the time of the pandemic. So, we mixed the themes up. We wanted to highlight the new digital economy. Thus, this is a positive, upwards-looking, kind-of a narrative.

Was there a personal incident/tragedy related to it that you know of? That you have built the story on?

Rishab: I know that there were neighbours giving money to their house helps to deposit it to their banks and so, a lot of what is happening in the film has been derived from real life incidents but the thing is, it had turned into a bit of a circus, hadn’t it? (everyone chuckles)

So even if you don’t know someone personally, someone knew someone who had to do something sketchy at the time to find some kind of solution to save their black money. And you will see reflections of that in the film, too.

Because there are so many innovative ways of money laundering shown in the film that one wonders what the inspiration behind the same was.

Vishesh: So this term, ‘money laundering’ which came in — I think what demonetisation did is — it made people, who had just general petty expenses as cash, try to figure out what black or white even mean. For most of the country, it was a term that political figures or quintessential villains would have and when demonetisation came about, people were like, ‘okay, cash by itself is a problem’. After that, there were debates over what really would fall under black or white cash. We have a digital economy now, it was completely new, then. So this ‘cash’ was termed as toxic.

Rishab: Even people who did not have illegal money with them at that time, that is, unaccounted for money, some had cash withdrawal systems sitting at home, you know? And even they had to go stand in the line and they thought, ‘what does this ultimately entail?’ ‘Does this cash have any real value or not?’

Vishesh: Exactly. People got scared. Their savings would become zero.

Rishab: However, I must add, Vishesh and I were trying to make a film about entrepreneurship even before the demonetisation happened. A film about entrepreneurship, ambitions and dreams, specifically because Vishesh’s company stands for youth-oriented content. It so happened that we got this idea and we married entrepreneurship with demonetisation. It is not just about scams that we all have heard of, it’s actually about a guy who uses adversity and turns it into opportunity — that’s the core of the film.

The shift to home viewing through OTT, has it given an impetus to stories based on real events? Whether it’s entrepreneurship or demonetisation.

Vishesh: What OTT has done is that it has opened a billion screens. It is another huge outlet where story-tellers can express themselves. The limitations have now been removed. You can make the screenplay that is correct for the story and talk to various audiences. The quality is more and more focussed onto who you are talking to.

Rishab: In a nutshell, I think, OTT has created a level-playing field and I don’t think that is only true for films and shows based on reality but it also has openings for all types and all genres. For a theatrical film, you’re beholding a larger audience, you’re trying to find a greater commonality through taste and that comes with big compulsions. Whereas, in OTT, you can choose or target a more specific audience. Theatre is costly, for both the parties — the viewers and the film-makers.

I had a word with Amol, Smriti and Kavin and they showered nothing but praises on both of you.

I think bringing new faces to the screen is something OTT platforms have supported a ton. Care to weigh in?

Vishesh: Very kind of them (hehe). And, yes, OTT has definitely given Vishesh Films, and even the new banner I’m coming up with, more strength to take narratives with upcoming super-talented people, actors, musicians and technicians. The music that we’ve done in this film is largely by newcomers. In theatre, these things could turn risky but in OTT, there is a larger openness which allows us to bring newer talents to the forefront. Now, it is not a mandate to tell the narrative from the point of view of senior actors or try to retro-fit them into a story. Now, we have the space to bring in a younger story and cast a correct fit/face. They no longer have to carry big banners or names to get cast, but just the skill. I hope this golden phase and trend continues.

Rishab: I think star power is undeniable. There are stars in this country who have this magic around them, they’ve created that image. You know, I do want to watch an Aamir Khan film or a Ranbir Kapoor starrer. But we’re dealing with about 20 odd people, I mean we’re talking about those who wield that kind of power. But luckily, I’ve seen a shift in the past 10 years where the audience is just very happy consuming good content and they can look beyond the external faces. If the content is good, they take home as good an experience.

So, opportunities are more now. Where we can make films with fresher talent without having to rely entirely on big stars to carry your film. There are more stories than there are stars. So, we have to find a way to tell these stories and we’re now getting more opportunities to do so.

The actors completely adored the script, they said it was a perfectly written one.  Can you give a background on that? What were some challenges you faced?

Rishab: Actually, we had a lot of fun, you know. There was a ton of anecdotal stuff available in newspapers and news articles, and stories from friends. The challenge was basically that we wanted to present everything in a comic light. The question we kept asking ourselves was ‘how do we make this funny and entertaining?’ It was a great and fun process.

Vishesh: There was an ocean of information and experiences that we all discussed. There was a wealth of data and we knew what was our take was our take on it. So, according to me, the challenge was to filter out. To streamline it, put it in an entertaining manner, have fun with it and communicate it without getting too indulgent or boring was the task at hand. Humour weaved in something that is engaging and fast-paced was the main challenge.

Very excited for the film. What is one thing audience should look for when it releases?

Rishab: Um, this is two hours of pure fun. I would suggest you to watch it with your friends, enjoy it, revel in the nostalgia and just come out feeling good.

Vishesh: Agreed, comedy is community experience. Watch it with company, while having popcorn and perhaps, chilled beer. Everyone has a different interpretation of humour, so people might have different experiences.

Rishab: But I would like to mention, that this is not the comedy, hopefully, where we would advice people to leave their brains at home. So, keep your brains intact, watch it and enjoy the experience.

Vishesh: Adding to it, I’d like to request the audience to watch and support films with fresh talent and new narratives. If you want quality, you want new and fresh content, you have to support it yourself to see the change you’re asking for.