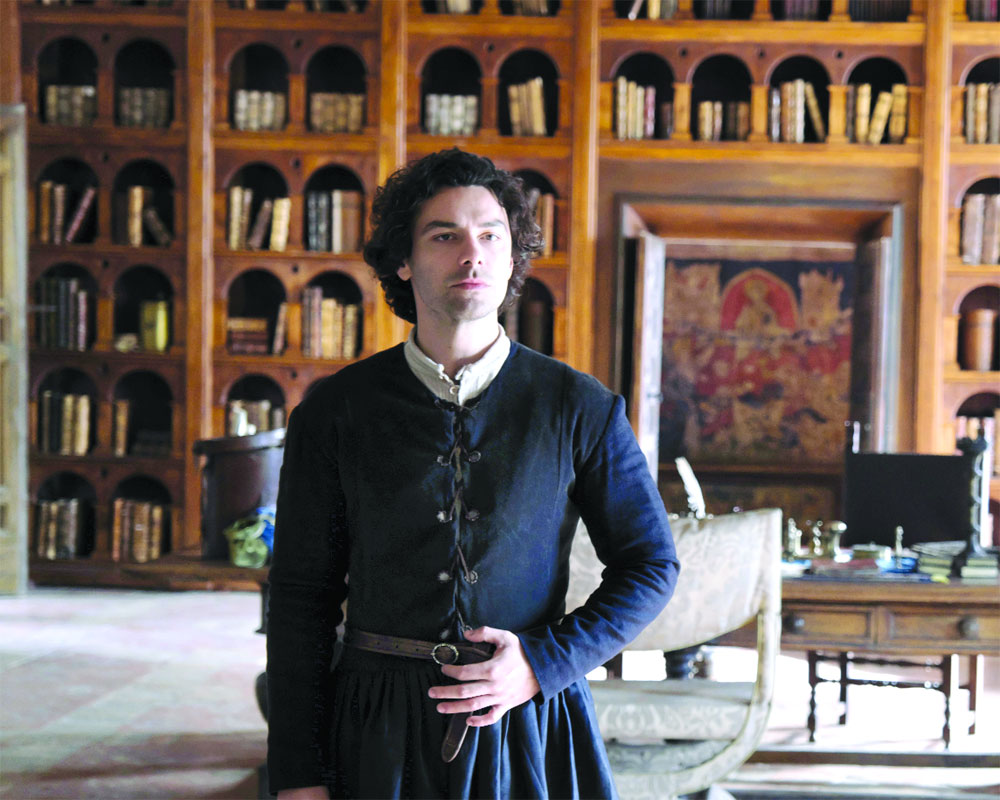 AIDAN TURNER, who plays the character of Leonardo da Vinci in Leonardo, shares that before playing the role he knew some of his inventions and a few famous pieces of art but not about his life. By Team Viva

You’ve done period dramas before. Is there a different kind of pressure when you’re playing an actual historical figure?

I have played Dante Rossetti before. He was a painter — a real person. I don’t think you feel any extra pressure necessarily. There’s more material obviously to go on with a character like Leonardo da Vinci. There are so many biographies and documentaries on him. I also got an opportunity to go to the Louvre Museum right before we started shooting. I got to see his paintings up close. You have all this wealth of information but at the end of the day you need to imagine what he was like as a person. I suppose given all of research and discussions with historians and different people, it comes down to the point where you put on the costume and just do the thing. So the pressure is the same, it doesn’t feel any different.

What was Leonardo da Vinci like in your interpretation?

To play a character like that, a historical figure, an artist, it can be intimidating and quite terrifying. But I think Frank Spotnitz’s scripts focus a lot on who’s the man behind the genius and that’s what motivates him as an artist and as a person. So reading Frank’s scripts, talking to him and different historians, we sort of came up with this different citations and manuscripts that we looked at that spoke so briefly about what he might have been like as a person. But they all focussed more on the kind of artist he was. Also he wasn’t as extrovert as someone like Michelangelo (Italian sculptor). It seemed like he was a more of a private person. I suppose he had the same vulnerabilities as we all have, a young artists who wasn’t traditionally schooled and had a very fraught relationship with his parents. He was raised by his grandparents. As a student, he was surrounded by people who would have been educated, so you can imagine how his late teens or early 20s would have been.

What were the things that stuck with you during your research for the show?

I didn’t know a lot. I mean I knew some of his inventions and a few bigger and famous pieces of art but very little about his life. There were so many of things I found out through research and talking to the producers and historians we had on our set. I wasn’t aware of his childhood. I didn’t know that he wasn’t formally educated. I didn’t know he was gay. I didn’t know a lot of aspects about his personal life. The smaller, more trivial things, I found out during the shoot. The director told me he’s was a vegetarian, which must have been quite unique at that time. So there was lots of uncovering, training and researching. But again, those things are kind of available for people to look at, and as interesting as they might be, I don’t know how much that carries in.

What research went into it? How long did it take to complete it?

I finished my last job and I had about six weeks before I started. I immediately left for Rome from Malta the following week. And then we started doing costume fittings, meanwhile, I did my own research. They had a painting and sculpting workshop that a lot of us became a part of. So I was just taking it all in, reading as many biographies as I could. A lot of hard work had been done. Frank and different producers would tell me to read a particular bit or skip one chapter or simply the things that are important. I got time to spend my own time with the paintings. The experience was quite special, not just from a research point of view, but it felt quite profound to be alone with his paintings. A lot of the time we see his paintings on our laptops or in magazines or on the TV, but to see them for real, the sheer scale of them, it was amazing.

How was it working with Matilda De Angelis, and the fact that the historians didn’t know much about her character Nova?

Working with Matilda was amazing. She already had done some bigger international projects and she’s really blown up now. We had so much in common. She can function quite adaptively. The way she observed things was just very different. It was in great detail. She was really distracted about how things work, what are the mechanics behind things whether its nature or not. She was Leonardo’s muse and there was so little information we could find about her. I think there was one document, where there was a sketch of her face and her name was written down as one of his muses that he used quite regularly. So we had to imagine major part of her character.

What was it like to be one of the first productions to restart during the pandemic?

Working through the pandemic was difficult. We were one of the first to be back, which felt quite strange. Nobody would believe we’re going back. We shot for three months, took three months off, we all went home and then we were back again, which, to be honest, felt pretty early at that time. We were in some ways guinea pigs. When we got back, it felt very safe. We used to walk into the studios, there was a huge sanitation machine, from which you had to pass. It reads your body temperature as well. There used to be a couple of nurses there for testing. We were getting tested every single day.

Do you share any talents with Leonardo? Was it difficult to pretend that you were a painter?

Where I draw the line is making comparisons between myself and Leonardo da Vinci. I think that’s incredibly tricky territory and a territory that I’m not willing to get into at all. As I said, he was a person, that’s the way it is for me. Researching and trying to claim the character, it seemed like really tough part. To think what I have in common, how do I relate to this person was very difficult because you can find nothing. He was one of the most incredible person that has ever lived. But we’re people, we both (me and Leonardo) are humans and that was the way it is. Thankfully that was the essence and the core of Frank’s story. We focussed a lot on just what it is to be a person, what it is to be human, and then, to figure out everything else that surrounds that. I do paint myself, but again, it’s not even the same. He’s left-handed, for instance, and I’m a right-handed person. I struggled to make comparisons. I just can’t.

What other artist would you like to play in a series or in a film maybe?

I don’t know. I always feel like it’s the writing and the idea that matters. It’s kind of tricky when you think: I want to do this, I want to play such a character or that particular person. I think, then, you might just focus on that one thing that they do. And for me, it’s certainly beyond that. It’s more about who the person is, it’s delving deep into the emotional core of who the person is. Focussing sometimes on the laminate or the outside thing that they’re famous for doesn’t always tell us a lot about what motivates them. So, I don’t know if there’s anyone in particular that I look at. So it’s a natural process. You can’t think about playing a part on-screen. I never thought I would read about an archaeologist or Leonardo for that matter. You gradually develop interest through reading about your character. It’s an interesting thing about being an actor, we have these opportunities to find out more and more about what people do and people did that we might not have ever known before. We actually get an opportunity to experience somebody else’s life.

(The show is to stream on SonyLIV from April 9.)