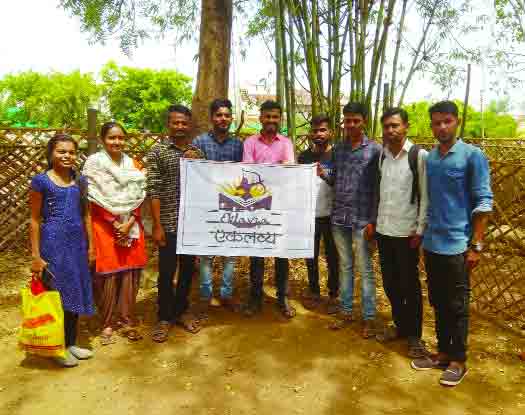 Neeraj Shetye shares the story of Raju Kendre, who overcame the system to pursue higher education and is paving the way for other marginalised students to do so as well

This is the story of a determined youth from one of the most marginalised sections of Indian society, paving the path for many behind him. It is also a story of how the ‘system’ itself creates barriers for many who do not have the privilege of accessing opportunities. It started 10 years ago, in 2011. Raju Kendre, then an 18-year-old boy, was in Pune for admission to undergraduate studies. Owing to financial constraints, he had to give up the opportunity. Today, he is transforming the education scenario in Maharashtra’s rural region by helping tribal and marginalised communities access higher education. Not only this, Raju’s determination and belief in himself and the grit to follow the unconventional path has won him the prestigious Chevening Scholarship offered by the Foreign, Commonwealth and Development Office, Government of United Kingdom (UK) to pursue his higher education.

“I dedicate this scholarship to first-generation learners,” Raju wrote to his programme officer at the Chevening Secretariat as he confirmed his opportunity to study in the UK for the next academic year. He has been asserting this during his press interviews and in his social media posts to highlight an important ground reality. “There are so many like me who have the credentials but lack mentorship to access opportunities in our system,” expressed Raju. As the results of the prestigious scholarship were declared on June 29, Raju’s story went viral on social media.

Raju was born to a family of farmers in Pimpri-Khandare, a small village in Maharashtra’s Buldhana district in the Vidarbha region. The area is known for faring poorly on development indicators compared to the rest of the state. He studied in the local zilla parishad school until the eighth standard, scoring good grades consistently. When he turned 14, he left for Bharat Vidhyalaya, Buldhana. The school is known for admitting meritorious students from nearby areas for further education.

After returning from Pune, Raju completed his bachelor’s degree from Maharashtra’s open university. “I had no one to guide me properly. As a first-generation learner, it’s important to have the right mentor to steer your path,” he shared. This sowed the seed for Eklavya, a grassroots mentorship platform for first-generation learners from tribal and other marginalised communities.

While pursuing his undergraduate education, he joined Maitri — an organisation — working in Melghat, a distant region on the foothills of Satpura hills in Amravati district bordering Madhya Pradesh. This region suffers from a high death rate among children due to malnutrition and lack of adequate healthcare. Maitri organises a volunteering camp during monsoons where social workers and volunteers from across the state visit the place and work towards improving the condition of the local populace. He mentions that this was a critical moment in his life when he decided to pursue this cause further.

Melghat transformed Raju’s career path. “My experiences have shaped my decisions. And the time I spent at Melghat made me realise that my problems were part of a larger systemic issue. Many of us from rural areas of India are still struggling to access the most basic facilities promised to us by our Constitution,” he said, describing the initiation of his journey. In 2014, he passed the entrance to the Tata Institute of Social Sciences (TISS), one of the premier institutes in the country, for development studies. He joined the Master’s programme in rural development. While talking about his experience at the institute’s Tuljapur campus, he revealed, “TISS helped me to structure my thoughts. It helped me to devise a plan from theory to action”.

His plan started taking shape when he took a break from the course in 2015 to contest the Gram Panchayat polls in his village. A local youth coalition was formed where the group addressed development concerns of the village — from education to water. To prove their commitment to the cause, Raju mentions that his panel printed their manifesto on bond papers and distributed it around the village. “People have the right to hold their leaders accountable. We wanted to prove this commitment with actions and not just words,” he remarked. They lost the polls but 21-year-old Raju set up a progressive precedent. “Today, local youth have mobilised themselves actively. They are forming independent panels and some have won these polls too,” he said while describing the political situation today.

After he graduated from TISS, Raju was selected in the Chief Minister’s fellowship programme commissioned by the Maharashtra State Government. During the fellowship, he witnessed the system’s functioning from within. “Maharashtra was at the forefront of the progressive movement. But there were instances which made me realise that the state’s commitment to implementing social justice measures was quite slow, especially for geographically distant areas generally populated by scheduled castes and tribes,” he said, citing one of the learnings from the programme. Raju strongly believes that Dalits, Bahujan and Adivasi students have to access formal education to uplift themselves. Intending to set up local libraries in distant villages of Vidarbha, he started a book collection drive after the fellowship. He is encouraging more and more students to read and think.

“I believe that a good mentor can steer you towards success. There are many organisations and government initiatives encouraging students to access primary and secondary education. But there are very few initiatives aiding these students to access higher education. Students coming from lower class-lower caste and tribal backgrounds do not have the same privileges. Many of us in the rural areas face a tough time with limited access and a grave digital divide,” said Raju, while elaborating on Eklavya’s philosophy. The movement has helped over 130 students from rural areas of Maharashtra access opportunities such as scholarships and placements. Students who registered in Ekalavya’s mentorship programme are placed in premier institutions like TISS, JNU, Azim Premji University, Delhi School of Social Work and IIT’s Development Studies programs.

After his success here, he started preparing for opportunities abroad to encourage students to aim beyond conventional options. Raju received offers from 18 universities in the UK alone but there was a severe dearth of funding. Chevening Scholarships are one of the most competitive scholarships known for selecting potential leaders from over 166 countries across the world. For the 2021-22 academic calendar, they received over 63,000 applicants globally, an unprecedented figure. Over 5,000 of these candidates were shortlisted for the interview round in March-April. While the exact number is yet unknown, the cohort from India has 35-40 members. Raju is one of them and he will be joining the School of Oriental and African Studies (SOAS), the University of London to pursue a master’s degree in development studies.

While discussing his goals after Chevening, Raju shared, “I want to establish a dedicated institution — India’s first tribal university — for first-generation learners. I want to use my experience to make things better for the next generation. Eklavya, as a movement, will create 2000 such leaders in the next few years.”

Raju’s story is a testimony to one of the gaps in our approach in ensuring social justice. Accessibility, alone, is not enough if there are no mentorship opportunities to help students from the margins enter the mainstream.