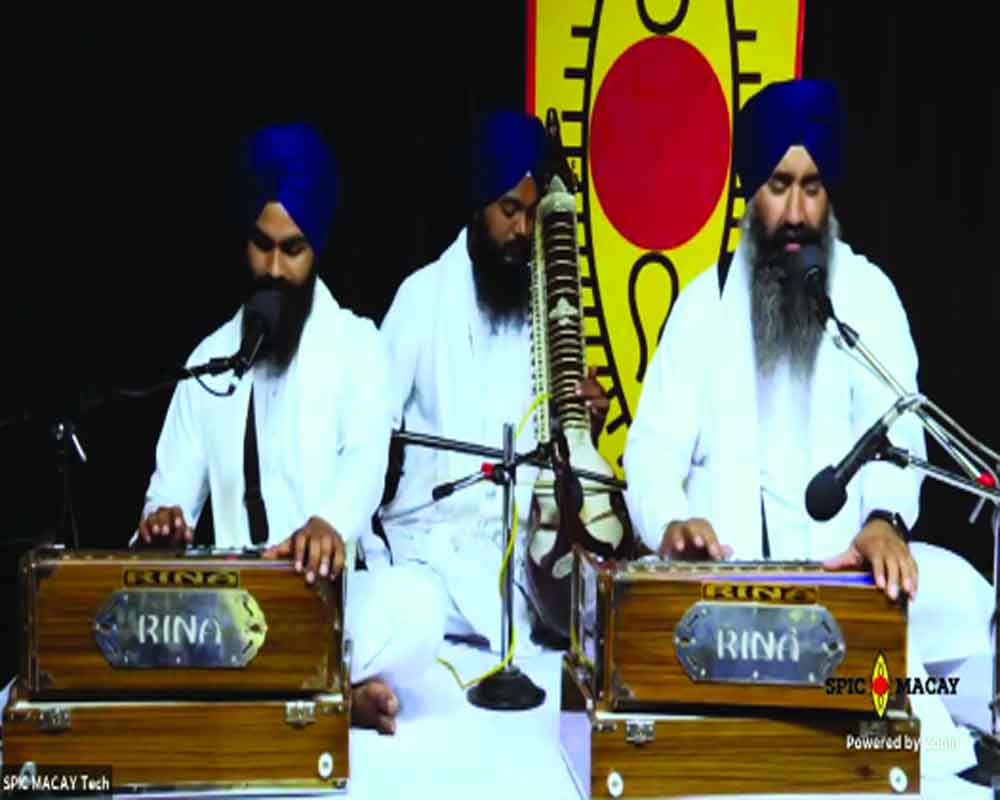 SPIC MACAY has been giving a glimpse into the rich cultural legacy and art forms over the years. Tanmaya Das finds out the true essence of Indian culture by exploring what has changed in the post-pandemic world

Having your day started with mesmerising folk music and traditions may help you to appreciate the charm of Indian history and culture. To gain some insights on Indian values, I attended an online series of programs, organised by SPIC MACAY, ANUBHAV-3, where more than 14,000 students have participated in several workshops globally. The seven-day online sessions and workshops are helping people to understand the core values of rich classical music and Indian heritage. The event will continue till October 15.

The first day of the event started with the line-up of yoga and meditation sessions on nada yoga or meditation on sound. After shramdaan (donation of labour) as a part of selfless service to society, the screening of Oscar-winning film Gandhi by Richard Attenborough was shown, followed by a discussion on the movie with Professor Gita Dharampal of Heidelberg University. In the afternoon, a holistic lunch was organised where participants were advised to eat sattvic food. Then, an orientation programme was held, in order to brief the students on the cultural extravaganza. In the evening, the early holistic dinner was prepared to help the students to wake up early the next day. The first day concluded with the two classical music concerts by Indian vocalists Sheik Mahboob Subhani, Kaleeshabi Mahaboob (nadaswaram) and Begum Parveen Sultana.

The second day marked the beginning of five-day classical dance, music and craft workshops by eminent Gurus, for selected students. The day started at 4 am or brahma muhurta with yoga and meditation sessions on naad yoga by Ustad Wasifuddin Dagar, who descends from a 20 generation-long line of dhrupad musicians from the Dagar gharana. In tranquil succession, the session of hatha yoga began under the guidance of Amit Shamnani, which began with the visualisation of the ultimate source of energy to boost the concentration power, which was followed by the Surya namaskar session.

After the yoga sessions, participants were asked to perform shramdaan. The students were urged to do household chores and cleaning before having a holistic and sattvic breakfast from 7 to 8:45 am. After the holistic breakfast, the first intensive was to give an unparalleled platform to the participants to deeply inquire into art-forms of their interest, vis-a-vis with maestros and legends of their respective fields. The yoga series was followed by 150 workshops conducted simultaneously by eminent artists, spanning art-forms of classical music, dance, painting, and crafts where more than 15,000 students across the globe attended 150 workshops. More than 750 schools and colleges from India, Bhutan, Bangladesh, Sri Lanka, Japan, S Korea, Singapore, Malaysia, UAE, are participating. Students will attend Carnatic and Hindustani classical music, all eight classical dances, folk music and dance, traditional paintings, theatre led by established artists. Next followed the nidra session, where the students were instructed to stay in the yogic posture of rest and calm down their senses and minds, listening to the soothing voices and instructions. For 15 minutes, the participants were guided into a relaxed state of mind, post which they were rejuvenated, full of energy and mindfulness. The afternoon session saw a wonderful performance by acclaimed folk singer Shri Prahlad Singh Tipaniya, a performer of Kabir bhajans in malavi folk tradition (Madhya Pradesh). Along with his entourage of proficiently adroit instrumentalists.

Next in schedule was the thought-provoking theatre performances that proffered a vivid reflection of society, which was brilliantly exemplified by Padma Shri awardee, Dr Neelam Mansingh. Commemorating the interim of events in the evening, participants were dismissed to consume their holistic dinner of sattvic food in preparation for the closing events of the evening.

Later, the Indian instrumentalist Bhajan Sopori ran his dexterous fingers all across the century of delicately suspended strings of santoor. The euphonious reverberations of ragas marwa and puriya kalyan pierced into the hearts of every listener, evoking an array of emotions by the sleight of each swar’s rhapsodic hand.

The second day was concluded with a sattriya dance performance of   Ganakanta Bora, who gracefully took centre stage, as he mesmerised the audience with his inescapably masterful expressional emittances, conveying a plethora of abstract emotions without a word escaping his jowl.

The third day started with a  blissful nada yoga session by Padma Shri awardee, Ustad Wasifuddin Dagar (dhrupad vocalist), who taught the students to master mandra,  saptak, and kharaj through raag bhairav. This was followed by the traditional hatha yoga sessions by Amit Shamnani from Bihar School of Yoga, to instil vitality. It started with mantra ucharan and ended with pranayama, nadi shodhan and prarthan.

At 6 am, a meditation session started to calm down the restless senses. Later, the audience was blessed with Gurbani Live from Sri Harmandir Sahib (Golden Temple). The next session was Shramdaan and after breakfast, the students joined more than 150 intensive/workshops by various master craftspersons, masters, Gurus of classical music, dance and other forms of art from all over India.

Post lunch, a yog nidra session was conducted by the founder of SPIC MACAY, Dr Kiran Seth, who guided the students to lay in the yogic  posture of rest (savaasana), to relax and meditate on their senses and calm down their minds, listening to his soothing voice and instructions.

The afternoon session opened up with legendary puppeteer, Dadi Pudumjee. He is the founder of Ishara Puppet Theatre Trust and president of UNIMA. The theme revolved around introducing and educating the students about the nuances of puppetry. An interesting part of the discussion was about how puppets are known in the world around us.

The afternoon session concluded on a calm and serene note with an enlightening talk by Sister Shivani of the Brahma Kumaris movement. Her pearl knit words revolved around the need to kill the Ravana within us, reflecting on the habits and thoughts of humans.

The evening session commenced with a Bharatanatyam recital by the most graceful Padmashri Malavika Sarukkai. The wisdom in her words about her ideology and passion for her art captured the audience. Later on, the beauty of auspicious veena played by Suma Sudindra’s, who is the recipient of Karnataka’s highest civilian award, Rajyotsava Award, along with Charulatha Ramanujan on violin,  Anoor Ananthkrishna on Mridangam and SN Narayanamurthy on Ghatam, set a mystical aura for the last concert of the day.

The evening sessions featured live concerts by Umayalpuram K Sivaraman (Mridangam) and Abhishek Raghuram (Carnatic Vocal), along with the symphonies of Abhishek Raghuram with K Sivaraman, the awardee of Madras Music Academy's Sangeetha Kalanidhi on Mridangam. The audience was enthralled by the enriching aalaaps paired with the soulful violin by HN Bhaskar and Kanjira by Sundar Kumar. It was followed by a live concert by the Dhrupad and torchbearer tradition of Rudra Veena instrument, Ustad Bahauddin Dagar, who is the recipient of the Sangeet Natak Akademi award.

After Brahma muhurta followed by meditation and yoga, the participants had candid discussions with gurus, and together they delved deep into the aspects of life and learning the art-forms.

In the afternoon, the music brought peace in the environment with whirling dervishes, which is a part of sema ceremony and the participants are properly known as semazens. The physiological goal of the whirling is for the dervish to ‘empty’ himself of all distractions. The session was insightful with the talks of Mr Fahri Özçakil, the dervishes' spiritual leader, who spoke about its significance. The Indian Ambassador to Turkey Mr Sanjay Panda also spoke on the occasion about similarities in Sufi traditions in India and Turkey.

Next on the list was the Gregorian chant, which is the central tradition monophonic, an unaccompanied sacred song in Latin of the Roman Catholic Church. Professor Iegor Reznikoff, a well-known specialist in ancient music/early Christian chant, shared some insights. Finally, a Gurbani session by Bhai Gurdev Singh, a hazoori ragis from Harminder Sahab (Golden Temple), enthralled the afternoon.

The evening sessions were graced with live concerts by Padmabhushan Dr L Subramaniam, followed by a Koodiyattam presentation, a traditional performing art-form in Kerela, by the very learned Kapila Venu.

On the last day, after breakfast, interactions with sculptors about the art installation, and lunch, there will be a virtual heritage tour of the Taj Mahal by the historian Ram Narayanan. The next on the list will be a holistic dinner followed by some western classical music.

During the sessions, the students have been kept away from the usual distractions of the world that is bombarded with too much knowledge and information. Participants are advised to go on a social media and TV fast’ and slow down to savour, understand, and introspect, to derive their outlook of Indian heritage and its ethics.