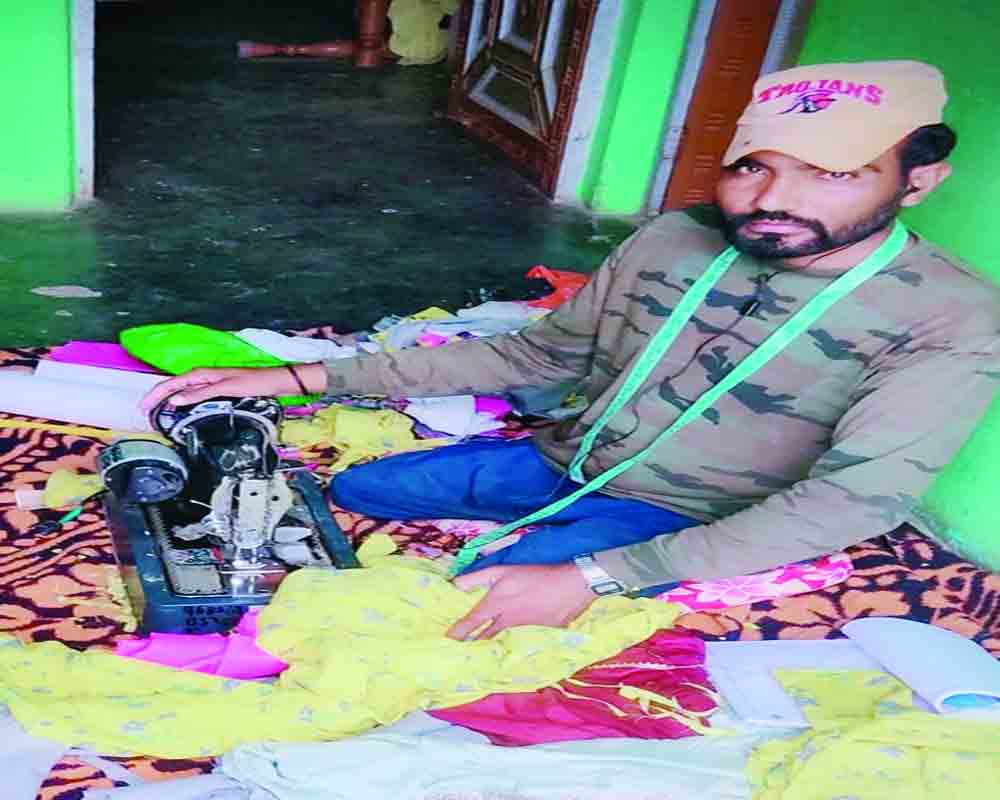 As per the Indian Census 2011, 2.68 crores people out of the total 121 crores population have been enumerated as ‘disabled’. While 0.81 crores are from urban areas, 1.86 crores i.e. 69 per cent of the disabled population reside in rural areas of the country. Some of these areas are so remote that the challenges faced by the disabled rural population never reach the policymakers. The life of Mohammad Qasim — a 16-year-old, physically disabled boy is one such story that requires immediate attention.

Diagnosed with clubfoot — a birth defect in which the limb is twisted or out of shape or position — this teenaged boy is the sole breadwinner of his family. A resident of the border district of Poonch’s Ban Baala village, Qasim lost his father when he was just seven. “After my father’s death, our lives became miserable. My mother never recovered from the shock and developed serious health issues. She is bed-ridden to date,” said this young boy while sharing his plight.

As part of social welfare schemes for persons with physical disabilities, Qasim receives ` 1,000 every month, but the money is insufficient to take care of his family’s basic needs, which includes his mother, a 12-year-old sister and a 14-year-old brother. Jobless, with no other source of income, this eldest son of a destitute family started begging on the streets to make  ends meet. He and his family survived somehow for nine years but with Covid-19 coming into the picture, their lives became even more miserable. “The market was shut during the nationwide lockdown. The streets were deserted, and people were scared to step out of their houses. Since then, we have been dependent on the ration being provided by the  government and non-government organisations,” shared a disappointed Qasim.

According to People with Disabilities in India: From commitments to outcome, a report by the World Bank, disabled people have significantly lower employment rates than the average, and this gap has been increasing over the past 15 years. With no avenues to earn a living, most of them are pushed into poverty. This affects one’s ability to afford treatment and other necessities.

“My family always wanted to get my foot treated but the lack of resources never allowed it. Despite the deformity, I did not quit. After several failed attempts to find a job, I started begging,” rued Qasim who believes that support from government or non-government organisations can help him overcome his physical disability. “If I could receive free treatment and financial assistance from the concerned organisations, I will be able to live a life of dignity and help my family,” said Qasim.

Undoubtedly, several schemes have been introduced by both the Union Territory administration and the Union Government to support people with disabilities but for people like Qasim, who come from underdeveloped regions like Poonch, it is difficult to have access to such schemes.

When Shakeel Ahmed, the district social welfare officer of Poonch, was contacted, he informed that pension is being provided to persons with disabilities under National Social Assistance Programme (NSAP) and Integrated Social Security Scheme (ISSS) in the region. “We will provide crutches to Qasim. He should visit our office and put an application to receive the benefit. We will see how we can support him further,” he assured.

Qasim, however, is not alone. 12-year-old Ismat Bi, 30-year-old Naseem Akhter and 42-year-old Shareefa Bi are others from Qasim’s village who have been deprived of basic rights only because of their physical disabilities.

According to Mohammad Bashir, a 50-year-old resident from the same village says, “Each member of our society is important for the development of the nation. It is extremely important for disabled people to have access to life skills and tools that support them in their journey to become independent.”

There are also examples from these mountainous villages that prove how a little support can change the  lives of people with disabilities. 30-year-old Abdul Karim, from Poonch’s Bhati Dhar village, was born paralysed due to  premature birth, but despite several hurdles, he trained himself to be a professional tailor in his region. “We have to accept our bodies and find ways to deal with different situations as we are different from others. We need help from the authorities,” shared Karim who believes that NGOs and administration can play a great role in supporting disabled individuals in making their lives. easier.

With access to new medical and health care technologies, special schools, vocational training, and NGOs, the livelihood of people with disabilities can be improved easily. Abdul suggested that increased and easy availability as well as accessibility to customised life skills can prepare disabled people to make their way through the constraints especially in rural areas.

Until the 2011 census, only seven kinds of disabilities were included in the survey. In 2016, after the introduction of the Rights of Persons with Disabilities Act, the list of disabilities was expanded to 21. Subsequently, the 2019 National Statistics Office report identified disabled people as those with temporary loss of an ability as well as neurological and blood disorders, in addition to the earlier definition, which included mental retardation and permanent inability to speak, move, hear and see. It also included acid attack survivors.

The government is investing great efforts to address the needs of both physically and mentally disabled people. However, the inclusion of persons with disabilities residing in rural areas is a huge challenge. They lack awareness, information and means to receive benefits from these efforts. In areas like Poonch, which is guarded by the mighty Pir Panjal Range, several Qasims waiting to be heard. It is about time their challenges are discussed at national level.