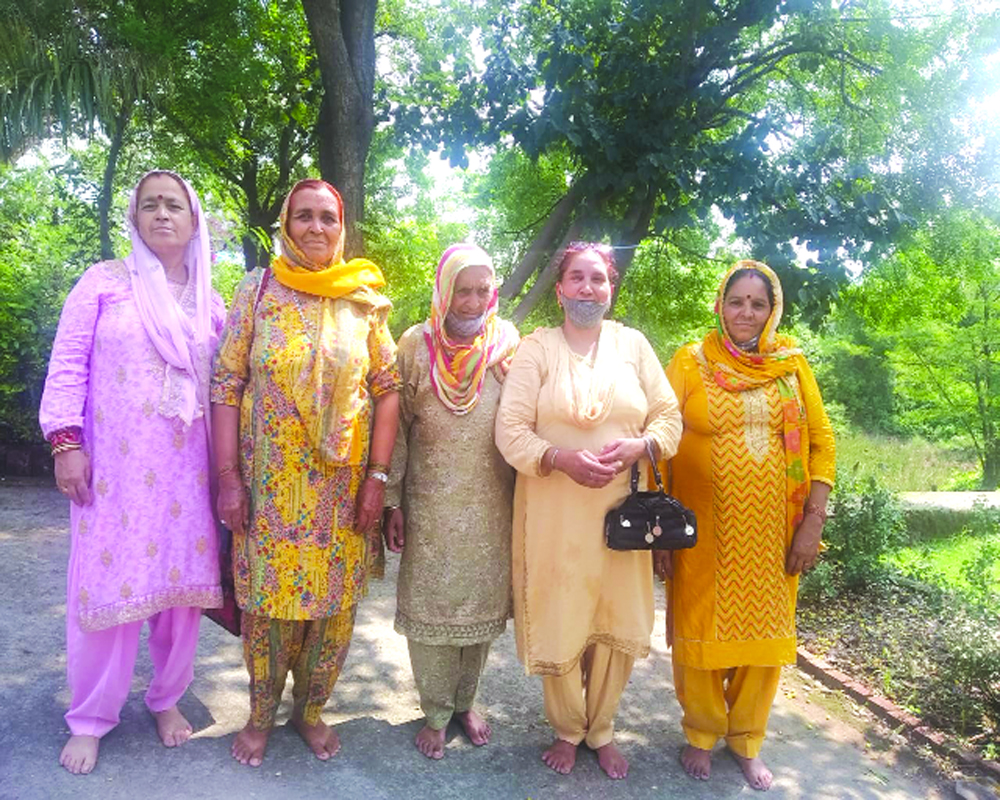 Sarita Devi left her alcoholic husband after she could no longer tolerate his violent and abusive behavior. It was a difficult decision as she had no help and had two small daughters to take care of. But she chose a life of struggle over one which entailed mental and physical torture every day. She toiled as a farmhand or did some odd jobs to make ends meet. She worked hard to educate her daughters. Today, one of her daughters is a graduate and is preparing for job-oriented competitive exams. The other one is receiving training in tailoring. Sarita worked hard not only for her daughters but for herself as well. Recently, she has been elected as panch (ward member) from the Gram Panchayat of Gagal in Kangra district, Himachal Pradesh. She has also formed a Self-Help Group (SHG).

“Bringing up my two daughters as a single parent was not easy but the support of the Ekal Nari Shakti Sanghtan (ENSS) helped a lot in providing guidance and assistance for the education of my daughters,” says Sarita whose struggle hasn't ended yet. She continues to work hard along with her daughters on a rented piece of agricultural land. “What has changed today is that people have started looking at me with respect. I work hard to do whatever I can to help villagers in my capacity as their elected representative,” shared Sarita whose confidence was completely shattered after she came out of that abusive relationship.

ENSS played a crucial role in rebuilding her confidence. She was elected as the President of the SHG called Ganga Sahaiyta Samooh. “The members of this SHG worked hard for my victory in the panchayat elections held early this year,” informed Sarita.

Kaushalya, another single woman from Solan district, has been successful in winning elections as a ward member from the Dhundan Gram Panchayat in Kunihar block. Her story too is that of a long lonely struggle after she lost her husband in 2009. “But that is the past. Today, I am happy that I can help the people of my village,” said Kaushalya who had joined ENSS in 2018.

The reason for encouraging single women to contest polls is to try and make them partners in grassroots governance and development. A part of SUTRA (Social Uplift through Rural Action), which has been running its programme on Local Self-Governance for almost 20 years now, ENSS is working to empower single women in rural areas who have to fight the patriarchal bias and discrimination even today. It helps single women avail the benefits of various government schemes including the education of their children.

“It is the Sangathan which had encouraged me to stand for elections,” she said. There were two other high caste women in the fray from high caste. Despite being a Scheduled Caste, Kaushalya managed to win — even though was by a narrow margin of six votes. She also led an SHG formed by women who had lost their husbands. “All the members of the group supported me throughout the election campaign,” said Kaushualaya, as she expressed gratitude for them and the ENSS for backing her even before the polls. Kaushalaya had already won the respect and support of the women in the village by helping them fight cases of domestic violence.

When asked if she would ever like to contest the post of pradhan, she said, “I have just begun. Let me first see how much I can do for the people as a Ward Member. I am also curious to see the response of the villagers. It is too far-fetched to think of the next elections as right now my focus is to whole-heartedly support our pradhan, Shakuntala who is also single.”

Shakuntala, the current pradhan, is a former Deputy Superintendent of Police (DSP), Himachal Pradesh. Shakuntala had joined the police force in 1977 at a time when not just the society but even her male colleagues were not ready to accept a woman in such a capacity. Post-retirement, Shakuntala decided to contest elections for the post of pradhan of Dhundan Gram Panchayat.

“My 40 years of experience as a part of the police force, hard work and the spirit to fight against all odds are some of the factors responsible for my victory in the election,” said the gutsy Shakuntala who believes there is a lot to be done as she begins her journey at the grassroot governance.

The ENSS encourages single women to contest elections at grassroot level and lends its hand in campaigns, but all the stories do not have a happy ending. There are several cases where single women could not win the elections. Take the case of Snehlata, whose husband died five years ago. First, there was pressure on her from the villagers to withdraw from the contest but she refused. As a single woman with no support from a ‘man’, she could not win the election from Ward No 3 of the Jolna Panchayat in Bhattiyat block in Chamba district.

Another single woman, Sunita, contested the polls for the post of pradhan from Binna Panchayat in Chamba district. Like Snehlata, she too was under the pressure to pull out from the polls. Sunita, however, stood her ground and decided to stay in the contest. Although she lost, Sunita has learnt a lot from the experience that will help her in the journey ahead.

“Yes, I received only 40 votes, but I know that I won these votes on my own without the backing of a man or money power,” said a proud Snehlata who also informed that it is mostly single women who lost the polls.

The life of single, widowed women in rural areas is full of challenges. Women like Sarita and Kaushalya are not only working hard to sustain their families but have shown the courage to take a stand against the patriarchal structure and caste norms. These single, rural women are showing the way to the rest of the world!