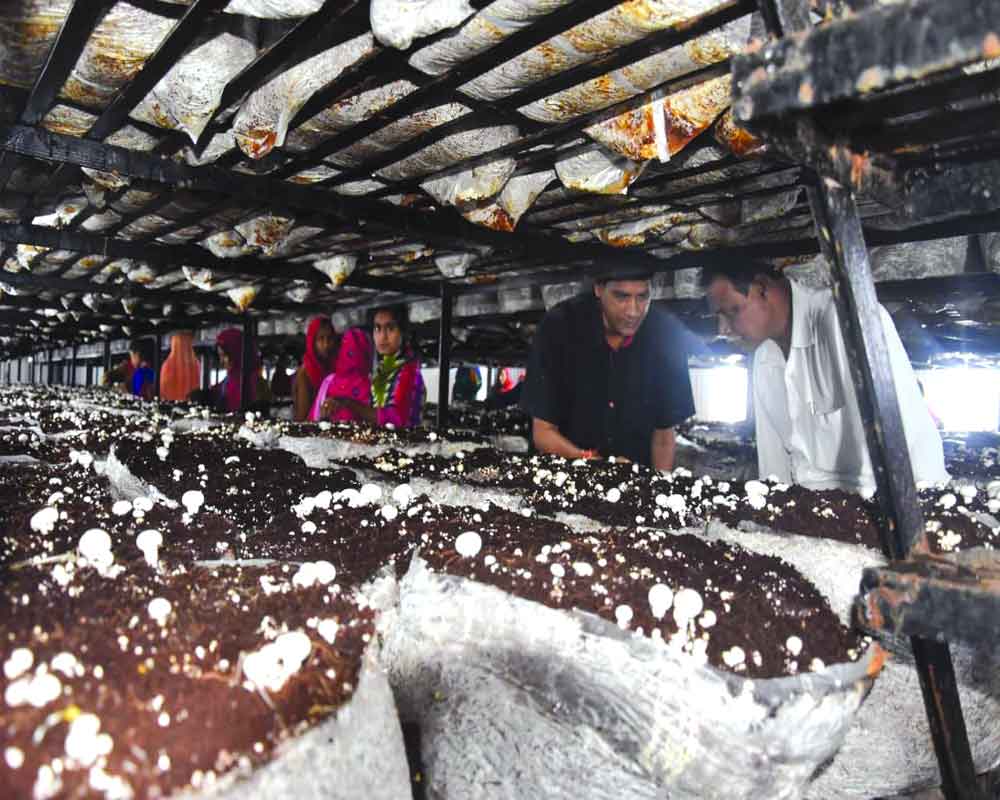 From migrating to Delhi in search of employment to offering livelihood opportunities to many, Shashi Bhushan has come a long way, says Phooldev Patel

Like every other youth, Shashi Bhushan Tiwari set off to Delhi in search of a lucrative career. After working at a private firm at Azadpur Mandi which could barely suffice his needs, Bhushan returned to his village and started a mushroom cultivation unit, creating jobs for many. Today, he earns lakhs by supplying button mushrooms to his district and other states and is known widely in his area for its cultivation. He named his unit Nanda Mushroom Farm.

Bhushan is a resident of Dhanauti village in Jasauli Panchayat in Motipur block of Muzaffarpur district, Bihar. Through mushroom cultivation, while building his own life, he has also provided a ray of hope to others. After providing training to unemployed youths, he hired them in his unit.

His journey began when he was invited to a feast where he noticed a dish made of mushrooms. Soon after that, he tried to gather as much information as possible about the vegetable. On discovering that mushrooms are easily available at any vegetable market in Delhi, he gathered information about its cultivation from regions near Delhi like Haryana, Punjab, Chandigarh and more.

To begin with, he started working at a mushroom production centre in Haryana and learned everything about its cultivation. After a few months, he decided to start a mushroom production unit in Bihar. He came back to his village and leased one        acre of land to start mushroom cultivation. He laid its foundation in June. Today, a little over five months later, the unit is producing 1,400-1,500 kilos of mushroom every day.

Presently, 75 women and 50 men work with Bhushan. This, in turn, means that 600-700 families are supported by his unit. According to him, it takes around 30 days to grow mushrooms and 20-25 days to prepare its manure. The compost is made up of wheat husk, coconut sawdust, soil and more.

“It cost Rs 4.25 crore to start the mushroom unit. I took a loan of Rs 2.25 crore from the Bank of India. Nand Kishore, the director of Horticulture Department, Patna and agriculture secretary, N Shravan have supported me a lot in starting this unit,” shared Bhushan about his unit.

Bhushan informed that mushroom cultivation can be done even with low capital investment. Eventually, the capital and production can be increased to generate more revenue. He pointed out that without proper training there is always a possibility that cultivation and marketing-related problems can arise. “People should get mushroom cultivation and marketing training from any agriculture university or Krishi Vigyan Kendra before starting. Alongside, information on government schemes on related topics should be collected from the agriculture department,” suggested Shashi.

Ravi Shankar, the project manager of Nanda Mushroom Farm, informed that mushrooms are cultivated at temperatures between 20-22°C. He stressed the lack of awareness around mushroom cultivation in Bihar. “With proper training and information, the youth can start small-scale mushroom production from their homes and earn a living. They don’t have to migrate to other states to find jobs,” reflected Ravi. While talking about it as an alternative livelihood, he also highlighted mushrooms’ health benefits. “Deficiency of essential nutrients can be prevented by consuming milk with mushroom powder,” he added.

On the other hand, Poonam Devi, the district councillor of the area, assured that she would demand more such small-scale industries from the Bihar government so that not only poverty and hunger are eradicated from rural areas but migration of people for employment is also prevented. “It is a great pleasure that mushroom cultivation is being practised in the form of a small-scale industry in my District Councillor Area-1,” she said.

Over recent months, Bhushan’s production centre has gained immense popularity in the district. Often, groups of youngsters visit the centre to learn the methods of training and production, while preparing themselves to be self-reliant through mushroom cultivation.