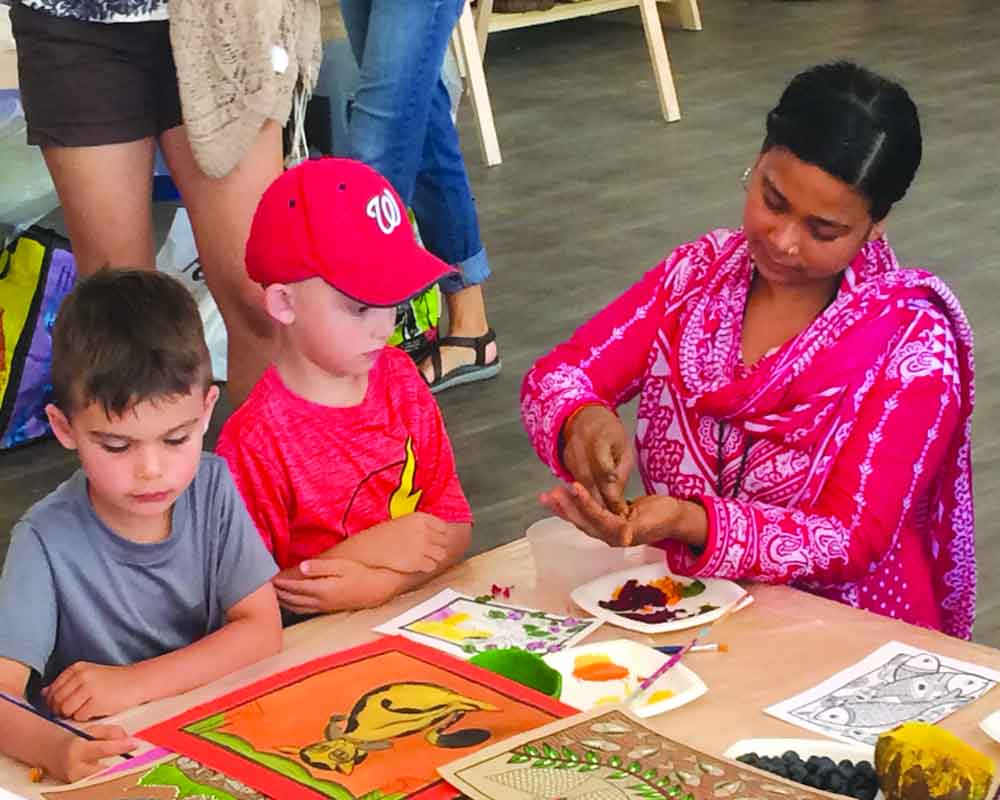 Madhura Dutta shares the story of two Patachitra artists, Swarna Chitrakar and Mamoni Chitrakar, from different generations, who are powerful examples of how adversity can lead to an innate desire for self-empowerment

Mamoni Chitrakar was born in a Muslim community of traditional Patachitra artists in a village called Naya in Paschim Medinipur. Patachitra is a folk form of storytelling through painted scrolls which the artists unfurl as they sing the narratives. Despite being a unique oral tradition, there were a few markets for it even 20 years ago. Mamoni’s family experienced a severe economic crisis as income from their art form was inconsistent. Mamoni’s mother, Swarna Chitrakar, was a strong woman who continuously fought the odds by making clay dolls and painting Patachitras, and selling them through agents whenever the opportunity arose. However, poverty is a vicious cycle, leading to exploitation by the markets, increasing marginalisation.

Mamoni was interested in painting from early childhood and used to help her mother in making colours. Her early years were spent in school, learning painting from her mother, and listening to Patachitra songs from her grandfather through which she learned folk tales, local myths and legends. She would collect discarded paper, tickets, pamphlets and would paint on those to practise.

However, being the eldest of five sisters, she was forced to leave school and get married at the age of 14. At 16, she had her first child, who was born with health problems. At night, she would dream of being educated and an achiever but had to suppress her pain of feeling defeated. Though her in-laws had assured her that they would let her continue her art, these promises could not be kept owing to destitution. Her husband worked as a daily wage labourer for a meagre income, not enough to provide full meals. As she was married in her own village, her fallback was her mother, who, being a strong woman herself, supported Mamoni’s household somehow. Mamoni started spending most of her free time at her mother’s home, sharpening her painting skills and learning associated songs. This was not acceptable to her in-laws, but she did not give up.

Meanwhile, intervention by Banglanatak.com, a national NGO using culture for sustainable and inclusive community development, brought opportunities for training and direct market linkages for the Patachitra folk artists. Swarna, along with a few other painters from this village, found her way out of poverty and marginalisation through the NGO’s support. Eventually, Swarna established herself as a world-renowned artist, showcasing her work nationally and internationally, illustrating books, and collaborating with French artist, Andre Cevera, to co-create a shared narrative on canvas. She says that it wasn’t easy, and her society did not support her travels and independent lifestyle. But she overcame the brunt of the condemnations by choosing to lead her life in her own way and to inspire other women as a changemaker.

As Mamoni was an excellent and passionate artist, Swarna encouraged her to become independent by pursuing her Patachitra skills. Mamoni, having her mother as a model of strength, gathered the courage to step out as an artist at the age of 19. Her journey started with Kolkata and soon she was invited to showcase her art in Italy and the USA. Mamoni says, “I feel, once a woman realises what she is capable of, nothing can stop her from achieving her dreams. In my case, my lack of higher education, poverty, societal as well family pressure did not matter once I had made up my mind to become a professional artist. Today, I am an inspiration for many in my community.”

Mamoni’s economic independence and fame led to her liberation from socially prescribed duties. A renowned artist today, at 32, she runs her family, supports her husband, and provides for the education of her two children, a son and a daughter. Her journey represents a beautiful mother-daughter relationship, both holding on to their traditional cultural form of Patachitra to escape their distress. Mamoni’s mother, Swarna, not only pulled herself out of hardship but instilled the same progressive attitude in her daughter.

Swarna says, “When I got recognition as an artist, I realised how important success and getting acknowledged for one’s work is, especially for women. I was determined that I am going to help my daughter achieve her dreams; I will not let her talent go to waste. I encouraged her to pursue her love for Patachitra painting even when her in-laws were discouraging and helped her financially as well. I feel it is very important for changemakers to create the leaders of tomorrow, and I wanted that for my daughter. Today Mamoni is an established Patachitra artist, she goes to fairs and festivals, travels abroad and amid all this lies my share of happiness and success.”

Both women, from different generations, are powerful examples of how adversity can lead to an innate desire for self-empowerment with art as their strength and inspiration.