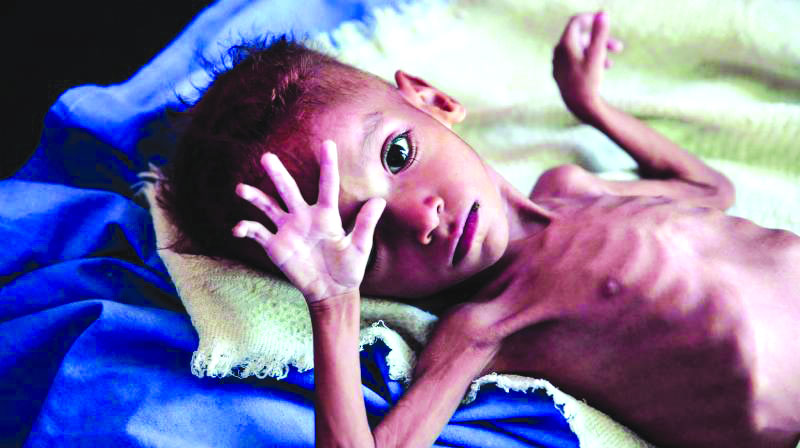 Thousands of children die because of malnutrition. We must question ourselves as to why we are allowing this carnage to continue. By Neil Binoy

The feeble cry of a baby is all that can be heard. A weak mother holding the even weaker child who has been wailing for hours because of hunger. Unfortunately, this is an all-too-common sight in India, where throughout the past year, malnutrition has become a serious problem. Recent studies have shown that nutrition up to the age of five is essential not only for physical growth but also for mental and cognitive development. If put simply, it is a necessity. On New Year’s day alone, 3,70,000 children were born. But who will feed them? Where will that food come from? With millions of children facing malnutrition across-the-world, this is a problem that should not be put aside.

The sustainable development goals (to be completed by 2030) are a collection of problems plaguing the earth and the humanity, requiring an urgent action. Although it is among the highest on the list, zero hunger finds very little mention or active action against it, and yet it rises. Can you recall the Pulitzer Prize winner Kevin Carter’s iconic photograph of a starving Sudanese child, who collapsed on her way to a feeding centre while a vulture waited nearby? Well, this is the depth at which malnutrition has dug into society. We must question ourselves as to why we are allowing this carnage to continue. We need a sense of urgency around the matter that we otherwise lack, a need to fulfill a crusade against malnourishment. Thousands of children are at threat because of malnutrition, especially in the global South.

This reminds me of Philip Volen’s saying: Poor countries sell their grain to the West while their own children starve in their arms. And we feed it to livestock. So we can eat a steak? Am I the only one who sees this as a crime? Every morsel of meat we eat is slapping the tear-stained face of a starving child. When I look into her eyes, should I be silent?

It is high time we begin to produce adequate food for our citizens. We need to inculcate the culture of farming nutritious and healthy food. I know the farmlands are reducing as urbanisation slowly spreads to even the most remote areas of India. Despite this, there is yet space left. Terraces, large swaths of empty, bleak concrete floors, can easily be converted to gardens.

So the next logical step would be to inculcate the culture of farming and food sustainability among children. This would be the easiest to achieve. We can simply do this by adding this as a subject to the school curriculum. This problem will slowly begin to stitch itself. Playgrounds and laboratories are necessary in schools. What about gardens and farming? This should be an issue that should be carefully assessed, not the outright killing of our farmers’ rights. Finally, and of utmost importance, the government should ban export and hoarding of food, especially while the people starve. The laws that used to safeguard this have been struck down in favour of the business community. We do not care about GDP growth or how rich our country becomes. But we do care about our starving millions. The upkeep and well-being of its people should be the primary focus of a government. Why do we witness its opposite unfolding?