Policewomen at the frontlines

Policewomen at the frontlines 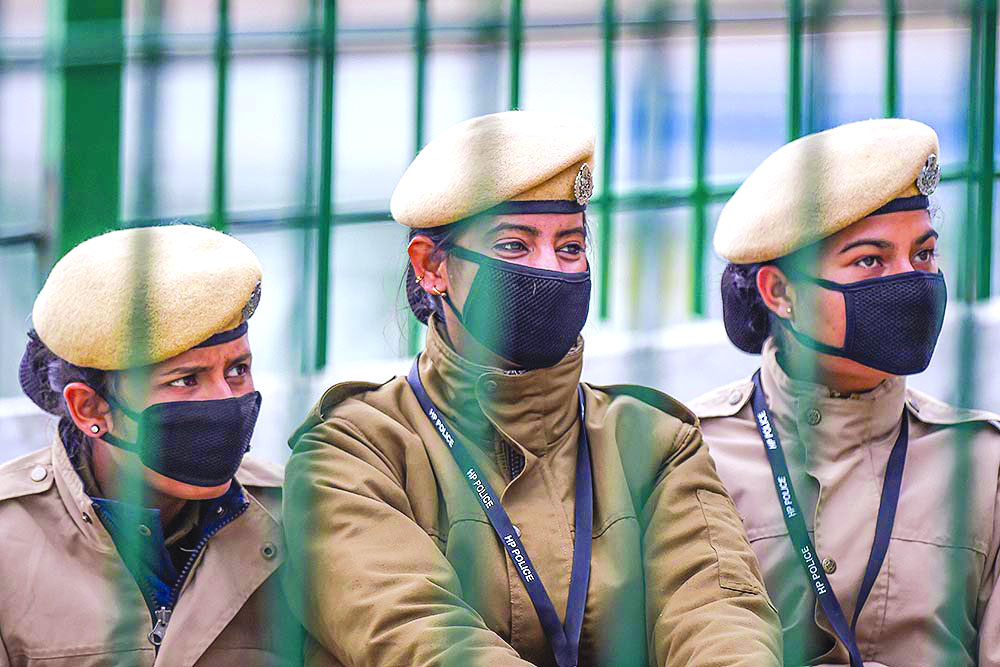 Sitting at home for weeks and months might make us irritable but we forget that we are secure. The people who ensure our safety have their own share of problems which are often overlooked, says Sarita Brara

Sakshi is one of the 204 women police officers roped in for COVID-19 duties in Kangra district, one of the worst affected by the second wave of the pandemic, in the hill state of Himachal Pradesh. Hailing from Palampur, Sakshi was deployed at the Behin village, a containment zone under Dehra police station, till May 24. After that, she moved to Shantala Containment Zone for some days before being stationed at the Police Lines in Dharamshala. While in Behin, Sakshi stayed in a school building along with four other women constables who cooked after a strenuous day’s duty that included standing guard at the village entry points or patrolling to ensure that no one entered the village through fields or other routes. If the force was curtailed because of some exigency, then they had to be on duty for 10 to 12 hours including the night shifts.

“We are in constant touch with the Panchayat Pradhan of the village. With his help and only after checking the necessary documents, do we allow people to enter the village. We need to be vigilant and patrol all the points that could be used for entering the village including agriculture fields,” Sakshi informed. Explaining how these police officers helped the village contain the spread of the virus, Tarsem Kumar, the Gram Panchayat Pradhan, said that the police force deployed at Behin during the containment period was quite effective. “Three camps for Covid-19 testing were organised successfully as these police personnel made sure proper protocols were followed. These women police officers had built a good rapport with the people and there were no untoward incidents during containment,” he explained.

Sakshi is among the 76 women police personnel from the Indian Reserve Battalion who can be deployed anywhere in the state based on the requirement at any particular time. Sakshi, who had joined the police force in 2018, has been on the move since then. Last year, when the first wave of the novel Coronavirus had strengthened its grip across the country, she was deployed for six months at Baddi, which was a hotspot. Then, Sakshi was sent to manage crowds during the Navratri festival at the Naina Devi temple. This was followed by stop-gap duties in Mandi, a district that had the second-highest number of COVID cases during the first wave.

A life full of challenges

Aarti, another women constable, also deployed in Behin village shared that their duty demands them to adapt as they move from place to place. “Sometimes, we have to stay in schools, panchayat bhawans or even police stations. We can be accommodated at any place, at short notice, with bare minimum facilities,” she informed.“There are times when we manage to get good food, while there are days when we are not so lucky. However, we have learnt to manage. We are always ready with our bedding and other necessities so that we can move swiftly whenever and wherever we are asked to go,” shared these two young, gutsy women officers. Over the years, they have learnt to strategise to make their stay a little less uncomfortable especially during physically and mentally demanding times like these. “We are assigned duties in shifts. This way, whoever is not on duty, cooks for others. This arrangement works well for the five of us deployed here,” explained Aarti who was deployed in Behin since April 12.

“Yes, the risk of being infected is always there,” said the women officers. However, they are provided with the necessary gear like masks, gloves, sanitisers and PPE kits. “Last year, during the first wave, while I was posted on the Baddi border, I had to wear a PPE kit the entire time to protect myself and others,” informed Sakshi. It is not just the officers posted on site who are at risk but the women police personnel posted in thanas (stations) have also been assigned roles as frontline workers. They too have to travel to nearby villages to ensure villagers are following the lockdown rules. However, they are not required to stay there. Bindu, a station house officer (SHO), at a woman police station in Dharamshala was infected by COVID-19 while she had gone to investigate a rape case. Today, she inspects and monitors various Covid-19 related activities assigned to the police officers in addition to other duties. According to Dinesh Kumar, Additional Superintendent of Police, Kangra, said, “Apart from duties in containment zones, the policewomen are deployed at vaccination centres and markets to prevent chaos during relaxation of curfew and to ensure that Covid-19 protocols are followed. They make sure that people follow rules of social distancing and that the shops close on time. They are also posted at traffic points to make sure that COVID-19 appropriate behaviour is being followed at all times.”

Their sense of duty keeps them going

These women have to confront unruly, uncooperative, rude and aggressive behaviour when violators are warned to follow the relevant protocols. Additionally, long hours of duty, lack of washroom facilities are some of the challenges that they have to take in their stride. When these policewomen are deployed at places for a long time at places which do not even have the basic facilities, they do feel a little dispirited. But this momentary feeling is nothing compared to the happiness and satisfaction they derive from serving the nation. “I feel proud of being a part of the force that ensures law and order in the country and protects people,” shared Sakshi. Police are often at the receiving end, but these plucky policewomen are risking their own lives to ensure that we are safe, like so many other frontline workers in these trying times.