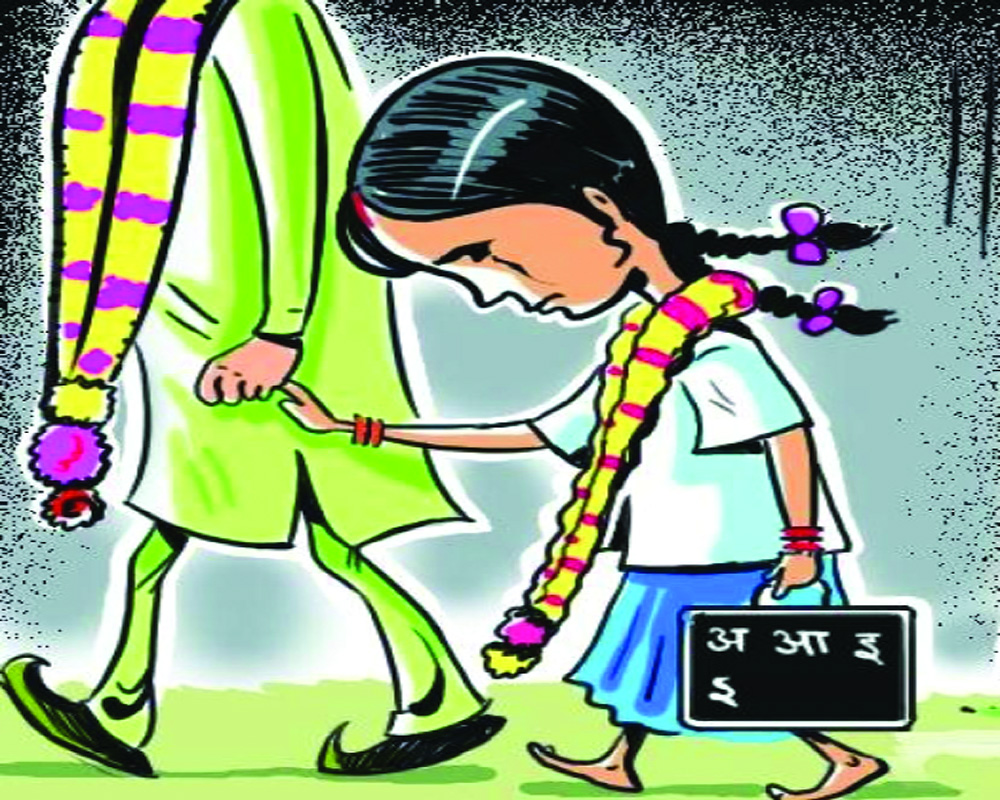 While the government’s initiatives and the efforts of NGOs have resulted in a drop in the number of child marriages, the road to ending the practise is long, says Rukhsar Kousar

One of the biggest challenges being faced by India today is the issue of early child marriages. As per UNICEF, approximately one in four young women in the country are married or are in union before they turn 18. While marriage is often considered a happy union, for thousands of adolescent girls, it is a nightmare that dawns on them against their wishes. Before they start understanding their existence, they are forced to adopt an identity that requires them to transform as per our rigid patriarchal set-up. The practice is more prevalent in India’s rural, remote areas than its urban counterparts.

Poonch, the border district, located approximately 250 km from the Jammu city in J&K, has currently seen an increase in the cases of early child marriages. Afsana, a resident of Manjiari village in Mendhar tehsil, Poonch, was forcefully married at the age of 16. “All my dreams were shattered the day my parents fixed my marriage. I requested them to let me appear for my Class 10th exams, but they assured me that I can continue studying after my wedding and that I will have full support of my in-laws. Nothing of that sort happened as my wedding hit the rock bottom sooner than expected,” said Afsana.

Soon after her marriage, she was faced with physical and mental torture. Her husband remarried, leaving Afsana to return to her parent’s house. With meagre resources, they have been trying to sustain their daughter who stays unwell for most of the time. “My very existence has been shattered by this unfortunate nuptial. My case is pending in the court for the last six years. I am considered neither a bachelor nor a married woman now,” shared she.

As per the statistics, however, the newly formed Union Territory of J&K has shown massive improvement in controlling the menace of early marriages. A comparison between National Family Health Survey (NFHS)- 3 with NFHS 4 shows that the percentage of child marriage among 15-19 years old girls has considerably declined from 5.6 to 2.6. The ground reality, however, paints a picture different from what data claims as lives of many girls are being ruined by early marriages.

Cross border firing is the biggest concern for parents. As the district is located near the line of control, the strategic location plays a major role in prevalence of this evil practice. Tension on the border directly impacts the future of the adolescent girls here. Seeing many young girls become victims of cross-border violence, many parents fear that this violence might impact lives of their daughters as well. It might make them disabled for life. They consider getting their adolescent daughters married to be the safest option. If only!

As per Kirpal Singh, a member of the Child Welfare Committee, Poonch, “While underage marriages are now rare in the rest of J&K, Poonch has seen an increase in the number of cases in the last one year. In 2020, 35 cases of child marriage were reported of which 30 were stopped by the committee. Five marriages were already solemnized. Similarly, we have received 10 cases in the last two months. As per the observed pattern, such cases are more common in border areas because of cross border bombing and fear of insecurity.”

Bringing focus on the ignorance and lack of knowledge regarding consequences of child marriages among villagers, Kirpal informed the writer about the awareness camps organised in the area. According to him, divorce cases are rising because girls are married too early, which makes them unable to perform the roles and responsibilities expected by their in-laws and husband.

On the other hand, parents have their own concerns other than cross-border firing. They are not comfortable sending their daughters to senior secondary schools or degree colleges which are quite far from their place of residence. They are also worried about financial resources and the increasing cases of sexual harassment. “The incidences of rape have increased all over the country. After watching such horrific news, we cannot sleep at night. To save our daughters and honor of our families, we feel getting them married on time is the only option,” shared many parents.

According to another member of the Child Welfare Community, Nimarata Lodhra, Poonch, has the highest number of early age marriages compared to other areas. Most of these cases are from Tehsil Mendhar and Haveli, where in most of the girls get married at an early age of 15. Along with physical damage, young girls often get subjected to psychological abuse, leading to negative impact on their overall health.”

Nafisa Kausar of Ari village of Mendhar Tehsil, welled up with tears while recalling her experience of child marriage. Despite requesting her parents to wait till her graduation, she was forced into a marriage in 2017. “My family began to pressurise me. I was tortured both mentally and physically. They would hide my books and would beat me for persistence efforts to educate myself. The pressure was so intense that my little rebellion died quite soon, and I gave up. The entire incident has left a scar on my soul,” she shared.

Dr Rubina Shafiq, a gynecologist in the district believes that early marriage pushes several girls into depression. Then comes the health implications as early age pregnancy is one of the main reasons for high maternal mortality rate. Many girls die while giving birth to the child. Postpartum psychosis is another serious issue that affects the young girls due to early motherhood.

Zuber Ali, a volunteer with Jammu and Kashmir Voluntary Health and Development Association, said, “Until a few years ago, marriage of girls between the age of 15 and 16 was quite common in several areas of this erstwhile state. Today, the number of cases has certainly decreased.”

The government initiatives and work of the non-government organisations have created a certain level of awareness among girls and their parents. They are now taking a stand for themselves and prefer to study before marriage. But there is still a long way to go to ensure no girl has to face what Afsana and Nafisa had to go through.

(The article has been written under Sanjoy Ghose Media Award 2020.)