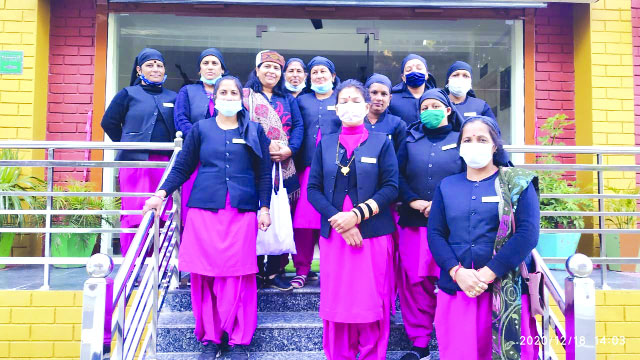 Himachal Pradesh’s all-women enterprise — She Haat — is a step towards empowerming the members economically and socially, says Sarita Brara

Two Indian Air Force women officers broke the glass ceiling on January 26 by becoming the first women pilots to participate in the Republic Day parade. They represent the valor of millions of women of our country who, in their respective ways, are challenging the patriarchal patterns of our society.

Fifty-one kilometres from Shimla, the capital of northern Indian state Himachal Pradesh, there is a wayside facility in Sirmour district called the She Haat operated by a team of 25 women. On the way to Nahan, this facility, which was inaugurated last month on December 17, has a restaurant, a guest house, a production-cum-skill development centre and a rural haat apart from a neat and clean toilet complex being successfully run by only women.

As a part of the She Haat Society (SHS) — Self Help Group, this group of women underwent multitasking training for nine months before they took over this facility. Spread over approx. 1,500 square yards of land, not only are the stalls here managed by them but the handicraft and other products they sell are all created by these women from the small hamlets of Bagpashog Gram Panchayat in Pachhad block of this district.

The training was given to them in the hospitality sector, tailoring, making of disposables from the leaves of the locally-available Maljan - an Ivy collected by women from the jungles, et al. They were taught accounting and even the operating of a multi grain grinding mill by different entities which included NABARD and a Hotel Management Institute.

Some of these women come from as far as fifteen kilometres. An environment-friendly, e-rikshaw is used to ferry water from a natural water body and other requirements from the market. Even this e-rikshaw is driven by a woman, Meenakshi Sharma, a member of SHS.

“I bring women for the morning shift that starts at seven from a village nearly six kilometres from the facility. The water used for both cooking and drinking is from this natural source called baoli in local language,” shares Meenakshi who has no time to rest even after her shift gets over. Back home, she stitches dresses on order to earn some extra money to meet household expenses. The hotel, where her husband was working in Parwanoo, an industrial town closed down after the nationwide lockdown due to the pandemic and is yet to open.

Rekha and Anita, two women from Ganyana village have to pass a forest every day to come to the facility. “The secretary and the chairperson of the SHS are quite considerate and we have been given a permanent day shift starting from 11 in the morning to three in the afternoon,” shares Anita. “Their safety is more important, and we ensure that they don’t have to walk through the forest when it is dark and much riskier,” adds the President of the SHS, Meera Thakur.

Her own village, Ser Bharal is eight kilometres away but Meera says that she commutes via bus. Both Anita and Rekha change hands at cooking and serving along with a few other SHS members. The food is not cooked on gas but on chulhas (clay stoves) to give a rural touch to the menu that includes Sirmouri delicacies such as rice, maah ki dal, pude, jalebi, halwa, shakkar, patande, ainkulu and sidu.

“Apart from the vegetable and pulses prepared in local style, we serve lushke, patande and askali with pure ghee and kheer or jaggery. A few of these items can be described as Himachali Doshas,” explains Usha Rani, Secretary, SHS. Although they have supervisory duties to perform, both Usha and Meera lend a helping hand as per the need of one or the other department of the facility.

“It is our responsibility to ensure that the necessities for preparation of food and other things do not fall short and they are brought from the market well in time. So that we can handle other duties as well,” they explain.

These women work in four-hour shifts, starting from 7 am till 7 pm. The members of the SHS are drawn from different backgrounds — some are graduates, some have completed only high school, some young, many middle-aged but they all work as one team.

“All of us have been trained to handle each and every department,” informs Usha. Irrespective of their position in the SHS or the kind of work they do at the facility; they are entitled to equal share of the profits. Shalini Gautam, a commerce graduate from Dariyar village does accounting for the facility and works on the computer for data entry and other purposes.

“Running the whole facility — from purchases to bookings of the guest house, hiring taxis for sightseeing and handling the facility — is a huge challenge, especially for women from villages. Many of these women had never stepped out of their homes before. It gives me a great satisfaction to be a part of this challenge,” says Shalini, who is also a part of the SHS.

The stalls at the rural haat sell handicrafts made and prepared by the women members. Besides, a number of other women make these items at home and bring them for sale at the haat. This helps them earn three to four thousand a month.

“The facility was built at the cost of Rs 70 lakh, parts of which were drawn from MNREGA funds, NABARD, donations from industries and other development agencies, contributions from MP Lad funds and contribution by the area MLA,” informs Prakash Dutt Bhatia, Head, Bagpashog Gram Panchayat.

The facility has been constructed on the main road from where tourists can make visits to several attractions like Bureshwar Mahadev temple, the Mangarh ancient Shiv Temple, Bon Monastery to name a few.

It has been a little over a month since its formal inauguration, yet these 25 rural women are looking forward to the end of the month when they will get an equal share of the profits they have earned.

“In addition to the visitors commuting on the highway, we have started receiving bulk bookings. At the end of the month, 70 per cent of the profits will be distributed among the members of the SHS. Our target for now is that each one of us is able to earn at least Rs 10,000 a month. After obtaining NOC for running the guest house at the complex, we expect our profits to go up considerably,” says Usha.

Once the restrictions due to the pandemic will be lifted, the enterprising members of the SHS expect more and more tourists to visit the facility. This will definitely be a step forward in the social and economic empowerment of these hard-working women of Himachal Pradesh.