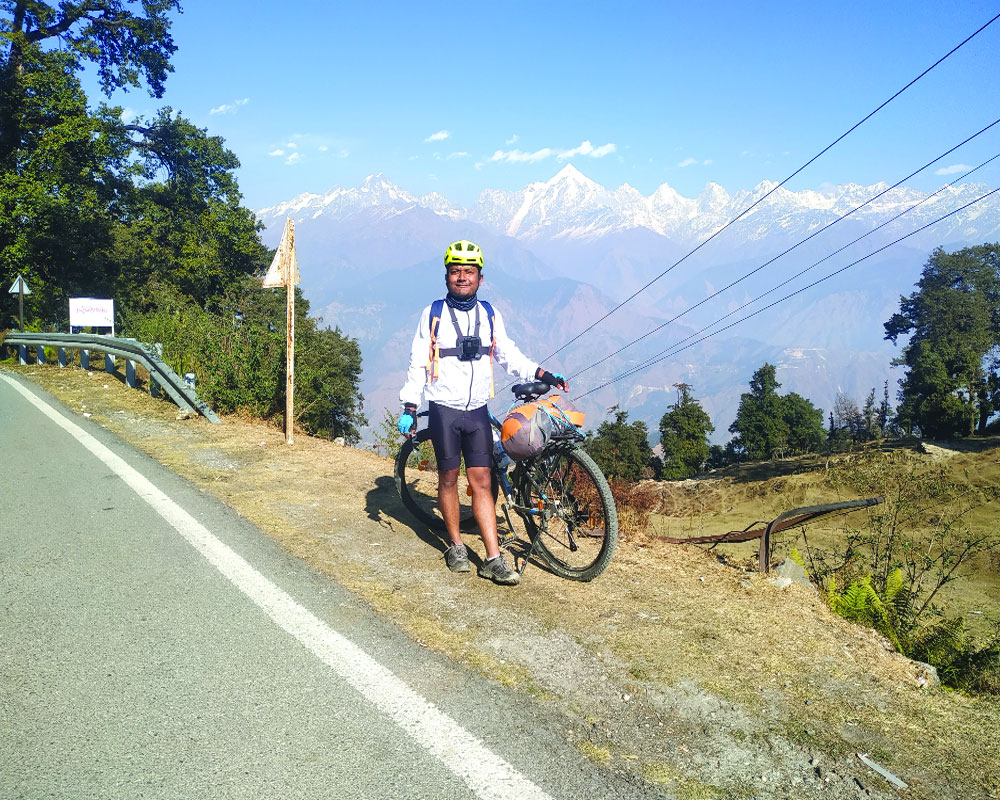 Indranil Roy relies on his luck, stamina and two wheels to embark on a journey that makes him rethink the purpose of being at a place at a given time

On a chilly evening, sitting by the fireplace and sipping on my artisanal martini, I wondered if a bicycle ride covering some of the breathtaking landscapes of Kumaon would be too arduous. Although, I had a fair idea about the terrain and elevation, I had no clue of what awaited me in the next few days. I’d often heard that sometimes the worst brings out the best ... but I actually lived through it. After spending almost nine months locked up in Delhi, I had to get out of the city as, more than the pandemic it was the extreme emotional turmoil that threatened to throw me off keel. I decided to move to the hills and fortunately found a very serene and peaceful cottage on the outskirts of Almora, close to Binsar Wildlife Sanctuary, and decided to spend at least a month there.

Uttarakhand is divided into two main regions — Kumaon and Garhwal — and Almora, the heart of the latter, is of great cultural and historical value. My days there were quiet and extremely peaceful. While I worked, I also explored some villages and faraway temples where tourists had never set foot. In the midst of all this I started riding my bicycle for the first time in the hills, which is absolutely different from doing it in the plains. Initially, I was extremely sceptical of whether I would be able to ride even 10 km in a day, due to the extreme steep climbs and winding roads, but within less than a week I was covering 60+ km which made me confident.

With my improved stamina, I made up my mind to do a long cycling trip covering two pristine destinations — Chaukori and Munsiyari. I was eagerly looking forward to what seemed to be an ethereal experience as the locals, who I had got acquainted with, had raved about the routes. Next, came the logistics and I was lucky to find a bike shop in the local market which fitted a carrier rack on my vehicle. Since pannier bags, which are recommended for bike journeys, weren’t available I settled for a regular backpack.

The day I started my journey happened to be one of the coldest that I had experienced so far. I left my cottage at around 8 am after having a light breakfast. Pro tip: Eat light and easy to digest food during long distance cycling.

During the first leg of my journey, till Chaukori which is 110 km from Almora, I was sceptical whether I’d be able to cover it in a day given the terrain and high altitude. A mixed terrain of uphill and downhill for the first 10 km was followed by an uphill ride of 10-15 km, which left me extremely sweaty. After Dhaulchina, it was completely downhill till Seraghat for the next 25 km. But while cycling became easier, another problem cropped up. Till then, I’d been wearing a regular cycling jersey along with a windcheater but while going downhill I started shivering and had to slip into a heavy padded jacket.

By afternoon I reached Seraghat, a small hamlet by the river Saryu, and from hereon there was no mobile phone network. When I reached the second bridge on the Seraghat Berinag road, it was 4:30 pm and Chaukori was another 30 km uphill. By 6 pm it was pitch dark but I’d no option but to keep moving as I’d booked my stay in Chaukori. Fortunately, I was carrying a powerful headlight which showed the way but the unknown terrains and forests enroute made me slightly scared. I kept pushing myself and halted at a small dhaba close to Berinag where everyone warned me that the last stretch till Chaukori passed through a dense jungle and leopards were known to venture out on the road at this hour. I was beginning to feel elated, as my GPS screen indicated that I’d covered 99.5 km and only nine more were to go when the headlight battery gave up. It’s often said that when you’re determined and passionate no force on earth can stop you. And sure enough, a good Samaritan showed up and guided me with the help of his SUV headlights for the next few kilometres till Udiyari bend. A group of locals gave me a lift till my resort four km away. I reached my destination for the day at 11 pm that night. The temperature was sub zero, around -5ºC.

The next morning, to my delight, was bright and sunny and I decided to rest and explore the surroundings. Chaukori has a splendid view of the Panchachuli peaks which are mentioned in the epic, Mahabharata. After such a long ride it’s recommend that you do a small low pace one to help your muscles recover and I did the same.

I begun my ride towards Munsiyari, 96 km away, which I thought of covering in a day’s time but destiny had something else in store. From Chaukori to Thal is a picturesque descent, till the the banks of the Ramganga river, where one can witness the peaks of Panchachuli. Since the day was going to be tough, I’d picked up bananas which are great for instant energy and endurance.

By late afternoon, I was close to Quiti, a fairly large village around 44 km from Munsiyari, when suddenly the chain of my bicycle broke. My simple itinerary was about to take an unexpected turn. Luckily, Quiti did have a bike repair shop where the chain was fixed. I’d covered no more than five-six km when the chain broke again. I realised it was best to call it a day and find a permanent solution. A pick up truck dropped me back to the same shop where, I learnt that, it could take up to three days for a new chain to be brought from Haldwani. But thankfully the stars were still aligned in my favour and I found a very calm and serene resort run by Kumaon Mandal Vikas Nigam beside the Birthi waterfall. Still there was no mobile network but I wasn’t panicking. I guess the city boy within me had vanished. With sub zero temperatures, it was just wise to have a hot shower, piping hot dinner and retire for the day.

I had decided to go on a trek with a young guide, named Puran Rautela, who arrived right on time. After a sumptuous breakfast, of alu puri and an omelette, we left for Birthi falls. We had planned to reach the uppermost part of the waterfall where apparently tourists never venture. The pathway to the top was so steep and narrow that I could place only one foot at a time. It took us close to an hour to reach the spot which was absolutely worth it as every turn offered a brilliant view of the vast open valley.

I was surprised to find some cows and calves stuck there and learnt that it’s a common practice to drive away commercially unviable cattle to die. Having made up my mind to save those gentle souls, I connected with a fairly influential woman running an animal shelter in Almora and we planned a rescue mission. I paid the villagers to drive the cattle towards the nearby village and from there the District Magistrate arranged for them being sent to a cow shelter in Pithoragarh.

Deep within a realisation took root that this must be the reason why my chain broke twice forcing me to stay in a place for two days where I had no plans to even halt. Meanwhile, Puran arranged the bicycle chain from Haldwani and invited me to a hearty meal at his house and we spent two joyful days together.

It was time to head towards my destination, Munsiyari, tucked away in the farthest corner of Pithoragarh district. I wanted to experience how difficult it was to cover this on my bike since the locals insisted that it is tough climb. They certainly weren’t wrong. There are 14 steep bends one has to climb to reach the Kalamuni top and the roads are extremely dilapidated. One has to have extreme mental strength to conquer these roads. I was absolutely exhausted by the time I reached the top where there’s a temple and two-three shops offering basic food and beverages to the passer-by. From hereon it’s a descent till Munsiyari and the roads are in extreme bad condition. Pro tip: If you plan to go biking on these roads, wearing a good pair of gloves is of utmost importance as, your hands can go numb while navigating through the numerous potholes and large craters. I reached the small hamlet of Munsiyari by early afternoon and checked into a homestay, recommended by a filmmaker friend from Nainital, run by an expert mountaineer. I realised that I had seen the best views of the peaks before reaching Munsiyari so make as many stops as you can to soak in the beauty and might of the Himalayas. There’s not much to do in Munsiyari but there are some nearby treks, the most

famous one being Khaliya Top. I stayed there for another day before leaving for Almora from a different route. I was raring to go on another cycling trip soon.