The plight of migrant laborers

The plight of migrant laborers 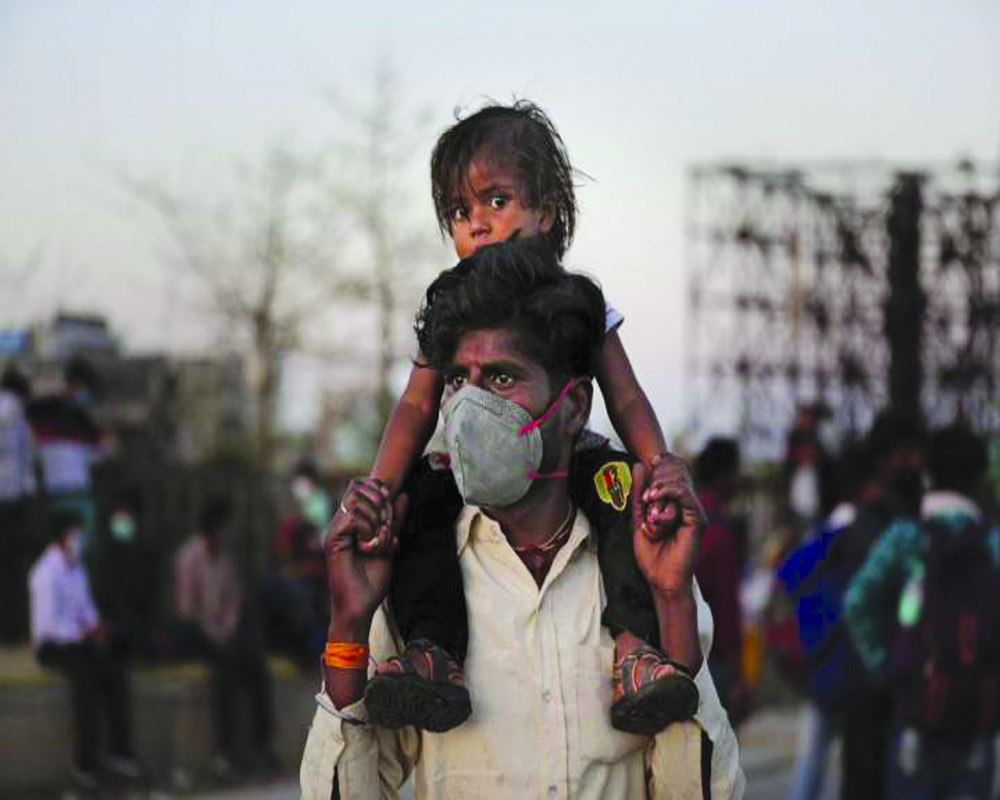 Due to modernisation, a lot of labour has been replaced by machines that has, in turn, decreased job opportunities for them. Migration, they say, is the only option despite the horrid experience they had to suffer during the lockdown last year. By Liladhar Nirmalkar

Last year, on March 24, the Central Government imposed India’s first nationwide lockdown to contain the spread of COVID-19 virus. These restrictions brought everything to a halt — industries were shut, trains and flights were suspended, schools and offices closed. India’s economy, like rest of the world, was threatened by the pandemic. The worst affected in this situation were the people who had migrated to other cities from their native villages, who were already finding it hard to survive and with the sudden lockdown, their vulnerabilities were further exposed. This led to a migrant crisis that is said to be the biggest human exodus since the partition of the country in 1947. Lakhs of migrants, left stranded in unknown cities, decided to take long journeys to return to their villages on foot. Millions walked hundreds, thousands of kilometers — many died on their way. A year later, their struggle continues.

After the five-month long lockdown, when both state and central governments started to uplift restrictions in a phased manner, labourers, who had exhausted all the little money they had, started looking for work again. Forced by extreme poverty and hunger, they worked for extremely low wages in and around their villages. With wounds of the lockdown still fresh, they were determined to not return to the cities that had abandoned them but as soon as the roads were opened and railways announced special trains, they started having second thoughts. The limited prospects and resources in their villages started to create pressure in the community. Thinking about survival, and calculating the risks, these helpless labourers have started to return to the cities.

One such state where the labourers have started migrating to the cities again is the central Indian state of Chhattisgarh. Most of the labourers of Baijanpuri village and its surrounding areas in Bhanupratappur Block in Kanker district have already moved or are planning to migrate to other states in search of work opportunities.

A month before the lockdown, Gajendra Rawate, a resident of Baijanpuri, had travelled 300 km to Maharashtra to work as a construction labourer. “I had to face several challenges while returning to my village after the lockdown was suddenly imposed. After my return, I started doing work that offered very little to survive,” he shared. Echoing his thoughts were Daleshwar Koratia, Suresh Yadav and Makhan Koratiya of the same village who were also in Maharashtra at the time of the lockdown. With no promising jobs here, all of them are planning to return to Maharashtra.

All the labourers from village Jampara in Kanchur Gram Panchayat have again migrated due to lack of work. Mukesh Kumar who belongs to the same group of migrants, informed that after the end of paddy harvesting season, there is no work left in this area. “We migrate to big cities like Bangalore. Till next sowing season, we work in cities earning fair wages and then return to work in the fields in our villages,” informed Mukesh.

Ever since its inception in 2006, the Mahatma Gandhi National Rural Employment Guarantee Act (MNREGA) has served as a credible lifeline for millions of vulnerable rural people. In the wake of the COVID-19 lockdown, MNREGA was expected to play a crucial role and support the returning workers. However, it has not been able to meet the employment demand of rural workers over the past few years, couldn’t serve to this newly created gap of unemployment.

In cities, the labourers would get anything between `300 to 400 for a day’s work while under MGNREGA, they are paid only `190 for the same work. For labour work other than under MGNREGA, the per capita wage in Baijanpuri region varies from `150 to 200 per day. Comparative high wages in cities is one of the major reasons why villagers choose to migrate.

While commenting on the current situation, as the labourers have started to migrate back to the cities, Pankaj Brijpuria, District Labour Officer, said “About 3,700 labourers had returned to the district during the lockdown. The efforts have been to provide them ample employment opportunities under MGNREGA. Even then, if villagers want to go out for work, we cannot stop them.” This is contrary to the lived experiences narrated by the labourers.

In several areas, work under MGNREGA has started while many other areas are still waiting for its execution. In modern times, a lot of labour work has been replaced by machines and that has decreased job opportunities for labours at local level. Migration, they say, is the only option despite the horrid experience they had to suffer during the lockdown last year.