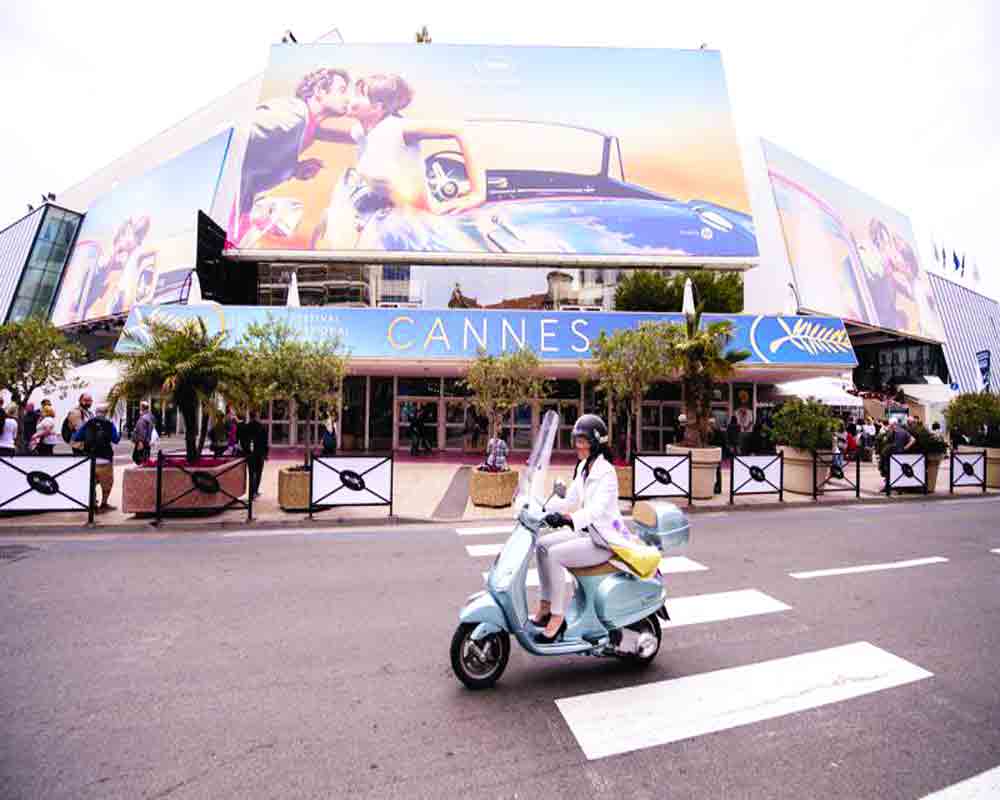 The show stopper among film festivals, the one in France is talked about not just for what it screens, the statement these make but also for the appearences that turn heads

The Palais des Festivals, the central hub of the Cannes Film Festival, a massive bulwark of filmmaker-named halls and pristine movie screens, is about as close as you can get to a cinema temple. To enter, you must ascend red-carpeted steps.

But in the past 16 months, Cannes’ Palais hasn’t been home to the movie frenzy it hosts annually. Last year’s festival was postponed, then cancelled. The Palais, instead, was lined with hospital beds in the early months of the pandemic. Earlier, this year, it was turned into a mass-vaccination ‘Vaccinodrome.’

Delayed from May to July, the Cannes Film Festival finally opened its doors for its 74th and maybe most critical edition on Tuesday. For nearly everybody who has come to the Festival des Cannes after months — in various stages of lockdown, quarantine and caution — the transition is head-spinning.

Even in normal years, Cannes is an onslaught. But this time, plunging into full-capacity theatres and teeming red carpets is like stepping into another world. The morning after the Val Kilmer documentary, Val, premiered at Cannes, its co-director Ting Poo was still reeling.

“Yesterday was so surreal. Just seeing the film with a full theatre, and here at the most prestigious film festival... To go from not being around people to that experience in a day was incredible,” said Ting.

The pandemic is far from invisible at Cannes. A negative COVID-19 test is required every 48 hours for even those vaccinated — unless they got their shots in the European Union. Moviegoers wear masks indoors. Everything is a little muted. Usually, well-booked hotels have vacancies. Screenings that would typically leave hundreds queueing outside don’t fill up. The usual tuxedoed ticket-seekers praying for a handout have been pushed away from the Palais, the festival hub, to clear space.

But in places like the Cannes red carpet, life is almost normal — if ‘normal’ can ever apply to a stretch of the carpet where coteries of stars drift in every few hours like parade floats. Glamour has been unmasked, maybe more than any other time in the last year and a half of pandemic.

Over the first few days of the 74th Cannes Film Festival — held two months later than usual, and after last year’s edition was scrubbed entirely — the red carpet has looked much as it has always before. Marion Cotillard, Bella Hadid, Matt Damon, Helen Mirren and Adam Driver have all strolled along, though they may have all been outclassed, fashion-wise, by Spike Lee and his flamingo-pink Louis Vuitton suit. Most walk unmasked, as the carpet is outdoors and most attending are vaccinated — though the proof isn’t required. And there are no fewer photographers than usual jockeying for stars’ attention.

The spectacle has picked up right where it left off. Nature, even the Cannes sequined variety, is healing.

“It’s a little bit like a strange dream, like waking up from this nap of two years doing nothing and suddenly: boom! There is a very particular kind of feeling to it because it’s like, ‘Where is the world going?’ Is it restarting? Is it changing? What’s going on here?” contemplated Avshalom Pollak, star of Nadav Lapid’s Ahed’s Knee, an impassioned Israeli drama competing for the Palme d’Or.

Cannes is taking place on the heels of France easing COVID-19 restrictions and reopening international travel. About half the French have received at least one vaccination shot, while 38 per cent are fully vaccinated. However, the Delta variant has pushed infections back up slightly recently, stoking fears of a resurgence. On Friday, French Health Minister Olivier Véran said the Delta variant would likely become France’s dominant strain this weekend.

That, along with images of unmasked attendees at premieres, has pushed the festival to increase pre-screening mask reminders. Swarming beachside after parties have been curtailed. In the hotels, the Croisette film publicists and executives have pushed their chairs out onto open-air balconies. Cannes mayor David Lisnard has even employed a pair of COVID-19-sniffing dogs to help with screening.

Ahead of the festival, its director Thierry Frémaux said dinners would be more favoured this year than cocktails. On the sun-dabbled French Riviera, most restaurants are spread out on the sidewalks. One major concession — Frémaux isn’t greeting guests at the top of the Palais stairs with a kiss, though there have been a few rogue smooches.

“The pandemic is not conquered, so we all have to be careful, even though most festival-goers are vaccinated,” said Frémaux.

But there are variations. The US of A, for example, has no official vaccine passport while the festival requires most to test every other day. The joke is that this year a negative test is the hottest ticket in Cannes. And, while at first, some complained about the less-than-elegant process of retreating to a cubicle to fill a tube with saliva, the tented lab just down the street from the Palais has become a regular stop for festival-goers — just like the Palais Nespresso bar, only less refreshing.

The specially erected testing site is staffed by 60 medical school students. The lab’s director, Guillaume Armana, shared that they were conducting up to 4,000 tests daily.

“We are working with the festival and the regional agency. For now, we have maybe 10,000 people to test and everything is under control. It’s the best way to make a festival again here in Cannes and to let the people have a new life,” said Armana, who revealed any positive tests would be confidential.

—WITH INPUT FROM AGENCIES

India may not have secured a position in the competition, however, two filmmakers are in the run for prestigious awards. Read on to discover other instances of Indian cinema being featured in Cannes 2021.

Rahul Jain makes his Cannes debut with this 70-minute documentary which charts the impact of climate change, global warming and pollution on the lives and health of millions of New Delhi residents.

The only Indian film in the Cannes official selection, Invisible Demons is among a seven-strong new festival section, Cinema for the Climate, introduced this year to portray the urgency of protecting the environment.

A Night Of Knowing Nothing

FTII alumna Payal Kapadia’s epistolary film will have its premiere in Quinzaine des Realisateurs (Directors’ Fortnight) and is competing for the Camera D’Or award. The film follows a university student from India writing letters to her estranged lover.

This is Kapadia’s second visit to the Cannes after she took her short film, Afternoon Clouds, to Cannes in 2017. It premiered in Cinefondation, the students’ films section of the festival.

While technically not a part of the film festival, Suman Sen’s debut feature Eka has been selected for La Fabrique Cinéma de l’Institut Français 2021, a programme curated for young filmmakers from emerging countries to network with agents and distributors across the world during Cannes. The socio-political drama is set in Kolkata and centres around the spirit of resistance of the common man.

Actor Shriya Pilgaonkar’s short film, Sita, will be screened at the Court Metrage Short Film Corner of the Cannes Film Festival. Directed by Abhinav Singh, the film is about a young boy who discovers an abandoned body of a baby girl and wants to cremate her. The film explores themes of caste, traditions and mythology.

Thirteen Destinations Of A Traveller

This documentary, by Partha Das, will feature in accordance with the Cannes Docs-in-Progress, part of the Marche du Film (Cannes Film Market). Every year, the festival partners with other organisations and festivals to showcase documentaries that are in progress and are seeking funding to finish a part of their shoot or post-production work. These projects will also be competing for $11,866 prize and other awards.

It narrates the story of two different journeys. The first is about a disabled, marginalised Muslim man in present-day India who struggles to change things, fighting economic hurdles, social walls and physical suffering to find love and compassion. But joy and peace seem to elude him. The other journey shows thousands of Sufi pilgrims marching thousands of miles over many days to help humanity discover love.

In the Marche Du Film, (Cannes Film Market), the National Film Development Corporation (NFDC) will present projects looking for financiers and co-producers. The films include Dengue by Prantik Basu, Rasa (Immerse) by Anjali Menon, Last Time On Earth by Paromita Dhar, Ghol (The Catch) by Rishi Chandna and Second Chance by Subhadra Mahajan.