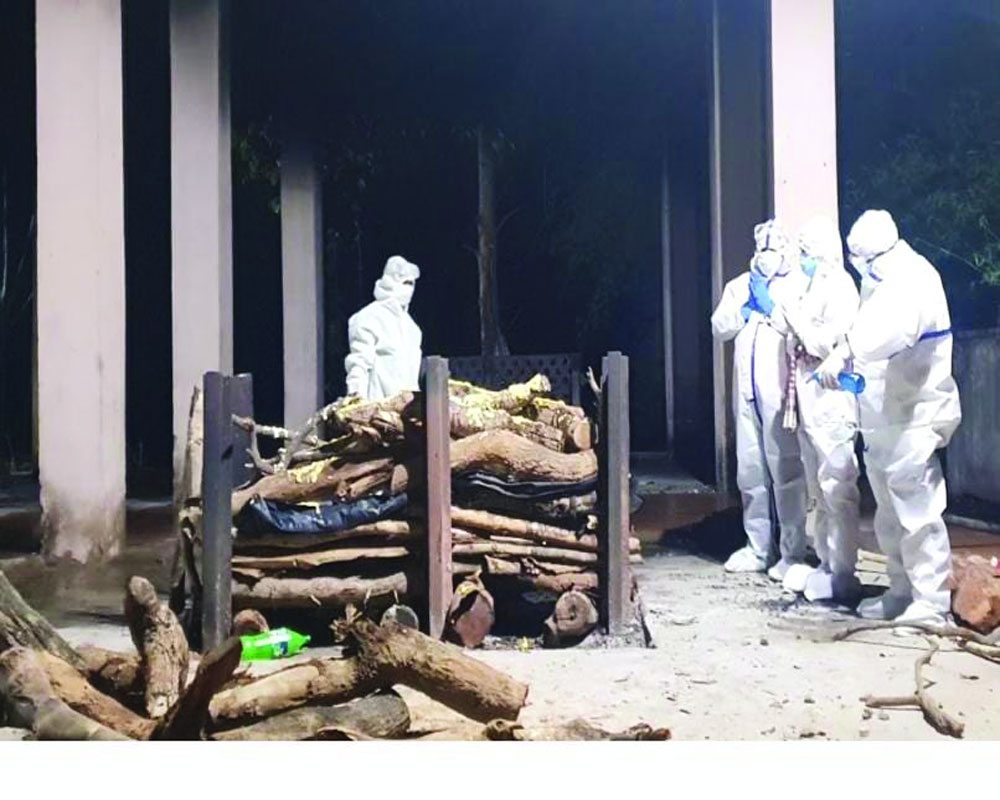 In October, after the body of a COVID-19 patient in Sundergarh town, the district headquarters of Sundergarh in Odisha, reached ‘Ranibagicha Swargadwar’ cremation grounds, the administration realised there was no one present to help with the cremation. The son of the deceased waited from morning till 4 in the afternoon when the sub-collector and executive officer of Sundergarh Municipality contacted Siddhant Panda, Shishir Kumar Behera, Manoj Kumar Tripathy and Kamlesh Kumar Nathani. The four friends, wearing the PPE suits, cremated the body. The next day, the media covered the story and named these Samaritans Shamshan Bandhu (friends at cremation ground).

Their journey of cremating dead bodies began two decades ago. “In those days, when a person died in our colony or sahi, all the male members would join to help shoulder the body to the cremation grounds and console family members of the deceased. We had joined one such instance, back then,” said 48-year-old Siddhant, who was 28 at that time. Whenever there was a call from their locality or neighbouring colonies these four friends would extend support. Initially, it was this interest that later transformed into dedication. “My mother would often say that Shamasane je sa bandhabah — a real friend is the one who stands with you during the funeral. We never stepped back from our mission,” said Siddhant. They also helped with the cremation of abandoned bodies. “In a small tin box, we would collect money from shops and people to cremate those who had no one to help them. During that time we relied on crowdfunding till we set up our respective businesses in 2003. Since then, we stopped collecting money from others and spent it from our pocket. This comes between `4,000-5,000 for the cremation of one abandoned body,” informed Shishir. To date, they have cremated nearly 700 bodies from Sundergarh town, which has a population of 45,036 (2011 Census).

In 2020, when the first COVID-19 death was reported, the administration thought of only these four friends who could help with the cremation. “When the administration called, although we had agreed to do the work, we were scared — not for ourselves but our family members,” said Siddhant. In the first wave, they had cremated 78 infected bodies, while in the second wave till (June 4) the number had reached 240.

Sharing the heart-wrenching incidents they experienced during the second wave of the pandemic, Siddhant said, “We have seen people become inhumane. The fear of infection was such that the relatives didn’t come to even light the funeral pyre and claim the ashes. Out of the 240 Covid-positive deaths, we lit the mukhagni (funeral pyre) of 56 people.” To date, the relatives of the deceased have not turned up to collect the asthi (ashes), kept in different earthen pots with names and mobile numbers of the departed persons. “We keep calling their family members to collect the ashes, no one turned up to receive these as they fear the infection,” said Siddhant. They shared that they will wait for a few days more, if no one turns up they have decided to proceed with the asthi visarjan (immersion of the ashes) themselves. “We don’t want to disrespect the dead and once the lockdown eases, we would perform samuhik visarjan (collective immersion) of the ashes,” said Manoj.

Challenges during the pandemic

Talking about the challenges while performing this work during the Covid-19 pandemic, Siddhant shared, “It was terrible during the peak period. In May, every day nearly 12-15 bodies were coming to the cremation ground. In the morning, we would light the funeral pyres for four bodies then after finishing the ceremony (Agni Shanti), we would get another call from the municipality informing us that some more bodies were on the way to the crematorium. There was no rest till midnight.” As per Manoj, the most difficult part during the peak period of the second wave was to perform the work wearing a PPE suit in the scorching heat of 44 to 45°. “We had to stand for three-four hours in front of the pyre. We couldn’t drink enough water as urinating after wearing PPE was a challenge. Sometimes, we felt suffocated while working for long hours,” he added.

These four friends have been conducting this work following all the necessary COVID-specific protocols. The local administration has provided them with a vehicle to carry the dead bodies and PPE kits to perform the work.

“After the work is done, we come to the room provided by the municipality where we disinfect ourselves, take off the PPE kit and after a small break, get ready for the next round of cremation work,” said Manoj. Besides appreciating their work, Abhimanyu Behera, sub-collector of the district, declared them as COVID-19 Warriors and vaccinated them on a priority basis.

When the family has abandoned their dead relatives, other community members have come forward to support their funerals. They have donated 70-80 tonnes of wood, ghee, sanitiser, water bottles and other things which are necessary for the cremation. These four friends, however, need more hands to support them.

Family support gets them going

When asked how their family and neighbours react to their work, Siddhant said with a smile, “Last year, when media highlighted our work, my father-in-law and brother-in-law asked us to not undertake the task as they believed cremations should be performed by people belonging to the lower caste.” His wife, however, stood by his side. Manoj — a Brahmin — also faced such issues. “This work gives us satisfaction, so we never pay heed to what others think of it,” he said. Kamlesh explained, “We receive calls from all over the district as people understand the importance of the work we do. Sometimes, we travel to different corners of the district to bring infected bodies for cremation.”

Seeing their dedication, the local administration and other organisations have felicitated them and their work. When they were asked about the name of their organisation, both Siddhant and Manoj laughed saying that they have been doing this work voluntarily and never thought of giving any name to it. It was the media that named them Shamshan Bandhu, a name people now associate them with. A name they are happy with.