Will the valley thrive?

Will the valley thrive? 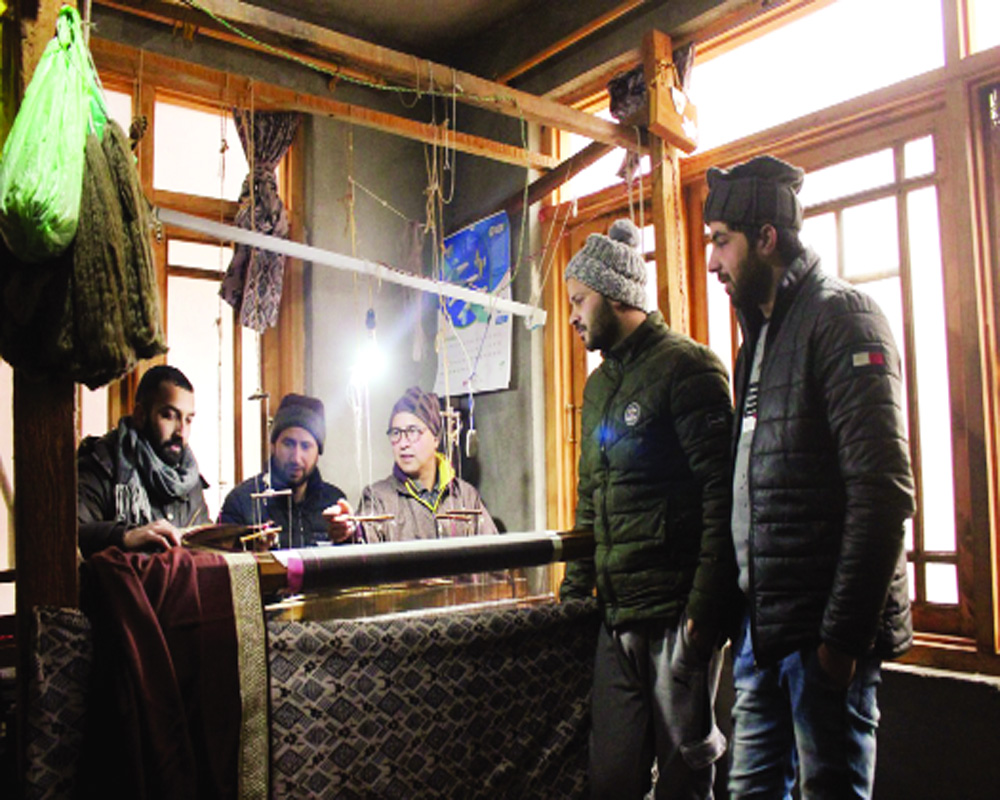 Kashmiri handicrafts have a huge market if allowed a strategic promotion. In the past, it incurred massive losses due to lack of high-speed internet, says Mudassir Kuloo

Worried about the dying art forms of Kashmir, particularly its handicrafts, a group of young men from the valley have come together to promote its different art forms in national and international markets through an online platform.

Arif Irshad, a 29-year-old documentary filmmaker, has been photographing Kashmiri handicraft products for different e-commerce websites. Seeing the traditional artisans and artforms suffer at the hands of modernisation, he along with three young men formed an e-commerce website ‘Kashmir Origin’ in 2018. Through the website, they promote Kashmiri handicrafts and provide a platform for artisans to sell their products. “Hundreds of artisans have associated with us since we began the venture. We provide online support and worldwide platforms to these talented artisans and support them to promote their products. To attract international buyers, we also assist them to adapt the traditional artforms to the contemporary taste of art lovers,” said Arif, a resident of Srinagar’s Natipora.

Arif, who has shot over 20,000 products for different e-commerce websites, during his interaction with the artisans, realised their struggles and sufferings. “They would share how without earnings, they were unable to make their ends meet,” said he. It was then that he along with Maurifat Ahmad, Adil Ahmad and Sameer Ahmad started the e-commerce website. Except Arif, all three co-founders belong to the families of artisans and have closely experienced the difficulties that pose a great threat to this community in Kashmir.

The worldwide popularity of Kashmir’s handicrafts can be contributed to the high-quality, precision and the fact that they are handmade. Gulf and European countries form a major customer base for Kashmiri carpets and Pashmina shawls. Presently, handicrafts bring around `1,700 crore as foreign exchange every year to Jammu & Kashmir. Despite the popularity, the art (and artisans) has suffered greatly as it remains largely unorganised with poor exposure to newer technologies and lack of proper marketing.

In Kashmir, there are approximately 2.5 lakh people associated with handicrafts including carpets, papier-mache, shawl weaving, wood carving and copper crafts, who are finding it difficult to feed their families and earn a livelihood. Several artisans have been forced to switch to other jobs. Elaborating on how they are helping artisans, Arif informed that the intermediaries were creating obstacles for artisans to grow their business. “Artisans associated with Kashmir Origin contact customers directly. They go live on social media platforms and make video calls to show customers how various handicraft items are produced. We put their items on top e-commerce websites where they get better returns,” shared Arif.

While sharing his experience of how the e-commerce website has benefitted artisans in the last couple of years, Abdul Rashid Khanday, a 45-year-old shawl weaver from Srinagar’s Eidgah said that their products are now getting global recognition. “People across the world now know about our products and their authenticity. We get the money immediately after selling our products. This wasn’t the case earlier. Also, we are now directly dealing with the customers as the role of intermediaries has been reduced through this intervention,” he informed.

Shedding light on other reasons for decline of Kashmiri artforms, Abdul said, “Machine-made products have gained popularity among artisans as it doesn’t require much hard work. Another reason is that some people are selling fake products as Kashmiri art,” he rued.

To tackle the issue of fake Kashmiri products in the market, they have started placing a Geographical Indication (GI) tag on Kashmir’s shawls. “Kashmiri artisans produce shawls of pure quality. Some people here, however, purchase shawls from other states and cheat customers by selling them as Kashmiri ones. To stop this practice, we have started placing a GI tag on products of our artisans,” Arif told us.

GI tags are indications which identify a product as originating in that territory, where a given quality, reputation or characteristic of the product is essentially attributable to its geographic location and origin. All this information is available on the website along with other details of the products.

“Customers, based on the information provided on the website, can now choose from a wide range of products. Before 2018, customers hardly had any knowledge about Kashmiri products or the artisans who make these products. Through this platform, customers can now know everything about products prior to making any purchase. They purchase things only after satisfaction and there is no scope of cheating. If anybody is not satisfied with the quality of product, he can file a complaint and also send feedback,” shared another Pashmina shawl weaver, Shabir Ahmad, 41, a Srinagar resident.

Ahmad believes that one of the reasons why artisans have been suffering for so long is due to the poor implementation of government schemes meant for artisans. “We have no knowledge about such schemes. This unawareness is required to be addressed immediately only then our community will be able to benefit from such schemes,” Ahmad said. He believes that setting up a marketplace in Kashmir for artisans to showcase their work at a platform will help sustain both art and the artists.

Like Ahmad, Arif also believes that Kashmiri handicraft items have a huge market if promoted properly. The artforms of the region, he believes, require strategic promotion. Although online businesses have flourished in the valley in the last few years, the biggest hindrance has been the low internet speed. Post August 5, 2019 (revocation of J&K’s special status), the internet was suspended for months in Kashmir. After 551 days of ban, the 4G internet was restored last month (February 2021). The low internet speed had caused heavy losses to the young entrepreneurs.

“We were not able to open our website and check customers’ orders when the internet services were blocked and later, when only 2G was allowed. To run an online setup properly, high internet speed is a prerequisite. We suffered 75 per cent losses because customers in Kashmir were not able to access the website due to no or low internet speed,” said Arif who is hopeful that restoration of 4G internet in the valley will help them recover from the losses.