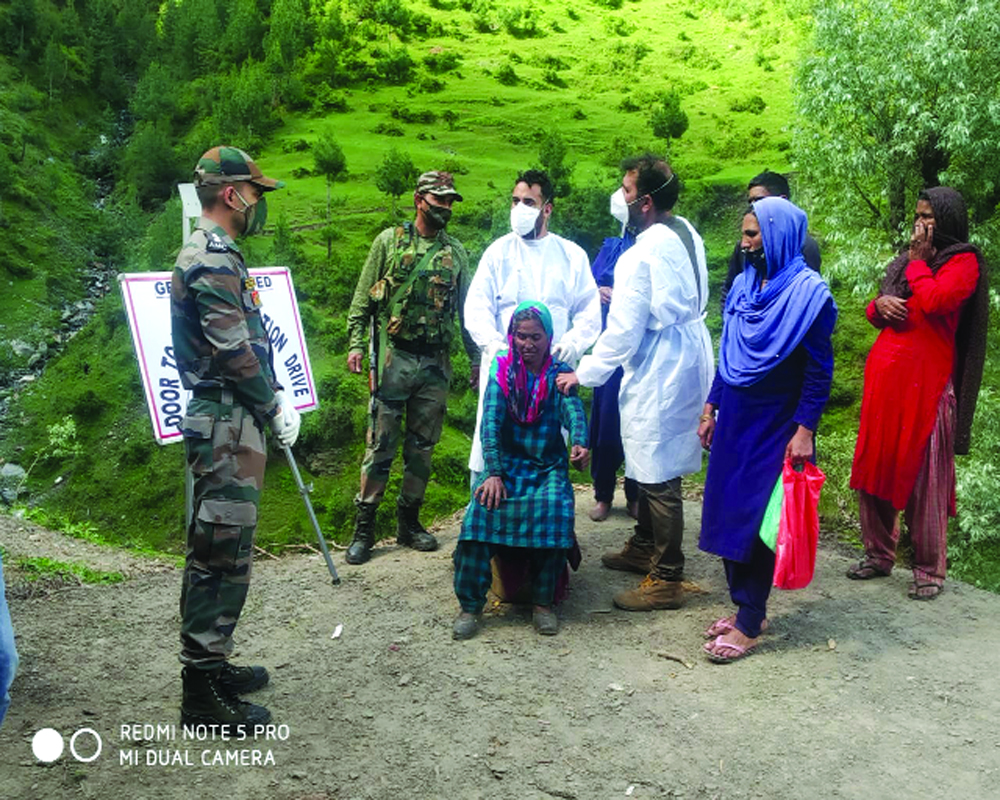 Every summer, Jetun Bibi, who is 70 years-old, and several other people migrate from Kalakote tehsil, Rajouri district of Jammu to the higher altitude pasturelands of Sonamarg, Ganderbal district of Kashmir, which is at 8,960 feet.

“Chettiar and Deghani villages in Kalakote tehsil are home to about 50 families from the Gujjar-Bakarwal community. Every year, in March, we start our trek towards Sonamarg along with our livestock. We carry our belongings and pass through the Pir Panjal range while making several stops en route. Around late October, we start returning to the plains,” Jetun said.

While seasonal migration is the lifestyle of such nomadic tribes, these six months are a difficult time for the community as it affects their development. They live in pasturelands without basic amenities. During the monsoon, they take shelter under trees in the forest or tarpaulins/polythene. They face threats from wild animals. Moreover, staying away from populated regions means that their children will not get any education. They face the challenges of a low literacy rate, lack of livelihood options due to limited skills and knowledge, poor sanitation, vulnerable weather conditions, low social and economic status. The complexities have increased in the last 19 months due to the pandemic.

Whatever their children could avail from seasonal/ mobile schools is no longer accessible. Without smartphones or access to the internet at higher altitudes, they are unable to attend online classes. According to census-2011, up to 1.5 million Gujjars and Bakarwals live in Jammu, Kashmir, and Ladakh. Most of them are deprived of basic facilities.

As these nomadic tribes largely depend on pastoral farming and small-scale agriculture, they earn by selling leather, wool, meat, and dairy products. However, due to Covid protocols, these communities have been struggling to survive. They hardly manage to sell their animals at a lower price. The nationwide lockdown has affected their traditional businesses. Now, they are more prone to food deprivation and other essential commodities.

During these dire times, some welfare organisations in the union territory have attempted to assist several nomadic populations. Poonch-based Sarimastan Tribal Gurjar Welfare Foundation, which works for the welfare of the Gujjar Bakarwal tribe in Jammu and Kashmir, supported them during the lockdown. “We made every effort to provide rations and medicine to these people. Our volunteers travelled several kilometres on foot to reach their camps,” Asad Nomani, the president of the organisation, expressed.

The pandemic has affected each member of the Gujjar and Bakarwal communities equally. According to Asad, the government authorities have extended immense support to provide relief to the people of the community. For those unwilling to visit hospitals or Covid care centres, ‘corona care’ kits were distributed door to door. Although the health department made efforts to conduct tests, distribute Covid relief hampers and create awareness about the virus, they had to face strong resistance from the tribe.

While the vaccination drive has been launched in every nook and corner of the country, reaching out to the nomads residing in the higher altitude of Jammu and Kashmir is difficult. So, conducting tests and establishing vaccination centres is quite challenging. It is also not feasible for them to travel long distances for tests or vaccination at the health centres. On the other hand, vaccine hesitancy among the tribal population has exacerbated the problem.

“For vaccination, when we reached Murrah, a remote area in Surankote tehsil of Poonch, the women started running away. They believed that the vaccine would lead to death within two years or might cause infertility. The unmarried girls feared they would never conceive after the vaccination,” Dr Nusrat Bajad, who is currently serving at a primary health centre in Chandimarh in Poonch, shared.

She shared that the healthcare workers were attacked and intimidated by the locals when they tried to address their concerns. Under such dire circumstances, it gets difficult to persuade young girls and women for vaccination. “All these problems occur due to lack of awareness among tribal people, especially women,” Dr Bajad added.

It is important to safeguard these nomadic tribes from the outbreak of Covid-19. One cannot be sure that they have access to various government programmes such as immunisation drives and other development plans. It is important to make the vaccination centres available to them at higher altitudes.