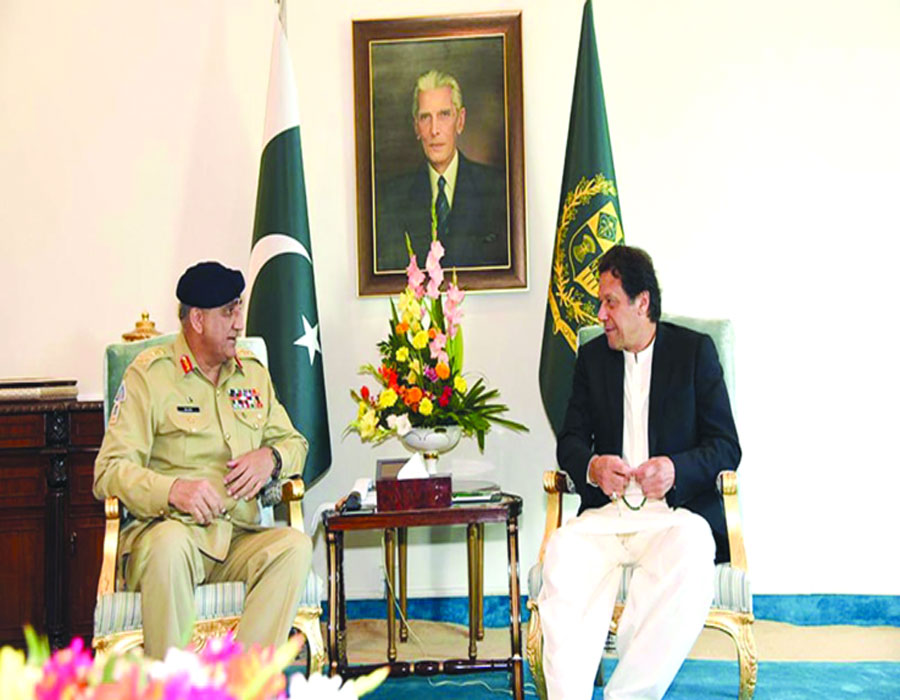 The proclivity of Pak Generals to overstay their tenures in office, vis-à-vis the professional transition in the Indian Army, is a study in contrasts

The British Indian Army was the common progenitor of the Armed Forces of independent India and Pakistan before its decommissioning in 1947. Inherited structures, ethos and templates ensured a common operating framework between the forces. Both forces had British Commanders-in-Chief manning the post-Independence transition till a native officer was appointed, Field Marshal KM Cariappa OBE in 1949, and Field Marshal Muhammad Ayub Khan in 1951, respectively. Both armies changed its leadership nomenclature to Chief of Army Staff (COAS), as first tenured by General Maharaja Rajendra Singhji Jadeja in 1955, and by General Tikka Khan in 1972. Irrespective of nomenclatures, military chiefs in Pakistan started assuming a larger ambition than what was mandated in the Constitution, and the rot had started with its first chief and later Field Marshal Ayub Khan (promoted himself to Field Marshal in 1965).

The proclivity of Pakistani Generals to overstay their mandated tenures in office, vis-à-vis the smooth and professional transition in the Indian Army, is a study in contrasts. Since Independence, combining the posts of Commanders-in-Chief and Chief of Army Staffs for both militaries, there have been 28 incumbents to date in India, and exactly half in Pakistan — put simply, many in Pakistan chose to extend their stay and some even decided to take over the country as Chief Martial Law Administrators, Chief Executives and Presidents! This usurpation and perpetuation of power by Pakistani Generals is not a practice of the past, but a continuing trend, with three of the last four COAS extending their tenures, including the serving Pakistani COAS, Gen Qamar Bajwa. Prior to him, Gen Pervez Kayani and Gen Pervez Musharraf had done the same, while the ostensibly odd honourable exception, Gen Raheel Sharif Janjua, may not have extended his term in Rawalpindi GHQ, but is currently the Commander-in-Chief of the Islamic Counter-Terrorism Coalition, a 41-nation alliance of Muslim nations based out of Saudi Arabia.

Personal preferences and misplaced perceptions of ‘loyalty’ amongst the ruling politicians, instead of seniority or professional competence, have played a predominant role in selection of most chiefs in Pakistan, and this corrosion had started with the selection of the first chief, Gen Ayub Khan. Wrongly believed to be ‘loyal’ and least ambitious, Pakistan’s then Defence Secretary (later President) Iskandar Mirza had prevailed upon Prime Minister Liaquat Ali Khan to appoint the junior-most Maj Gen Ayub Khan (who was not even in the list of four senior officers, nominated for the first native Commander-in-Chief). Soon, in a pattern that would get virtually institutionalised, the out-of-turn selected Generals would invariably turn on their political mentors and, in this case, Ayub Khan deposed Iskandar Mirza to exile. Later, another ostensibly ‘loyal’, pliant and non-threatening Mohajir (émigré from India) Gen Zia-ul-Haq, who too superseded seven senior Lt Gens, sent his political godfather ie, PM Zulfiqar Ali Bhutto, to the gallows. In a repeat of the mislaid assumption of yet another ‘non-threatening’ Mohajir (in Punjabi-Pathan dominated Army), PM Nawaz Sharif was to appoint Gen Pervez Musharraf, who too had superseded two senior officers to become the COAS — only to then bump off Nawaz Sharif in a coup d’état.

Nawaz had a particularly unlucky record in inheriting or ‘handpicking’ all six chiefs, who tenured along him. His first choice in 1993 of Gen Waheed Kakar was instrumental in forcing Nawaz to resign. In his second coming as PM, Nawaz forced Gen Jehangir Karamat into premature retirement. The third was his famously rocky equation with Gen Musharraf. In his third tenure as PM, Nawaz saw Gen Pervez Kayani unilaterally extending his tenure, and his next ‘handpicked’ Gen Raheel Sharif too became his own man by giving sleepless nights of possibly ‘extending term’, which he finally didn’t. Interestingly, the current COAS, Qamar Bajwa, was the last of Nawaz’s choices (after superseding three others), who too ultimately allowed Nawaz to get disqualified from contesting and is credibly believed to have thrown his institutional weight in getting Imran Khan’s PTI elected.

Now, having secured a three-year extension from the PTI Government, it is time for Imran to get worried as Gen Bajwa’s extended term is due for completion in November. The Pakistani Army has had multiple fissures with Imran’s Government in recent times, including appointment to the sensitive post of DG ISI. Trial balloons of the augury were the pointed questions of extending Gen Bajwa’s term for the third time to both, Imran Khan and Army spokesperson, DG ISPR, recently. In the Pakistani game of thrones, the timing of this loaded question is neither coincidental nor innocent. Adding invariable spice to the risqué question of ‘extension’ were straight-faced queries of a possible ‘deal’ with the Opposition PML-N. Both Imran and the DG ISPR denied any knowledge or concern, but the murky Pakistani history and evolving dynamics would suggest otherwise. The Pakistani military has always tactically counterbalanced parties without any ideological or personal affiliations and, as the one-time beneficiary of that institutional preference, Imran would know better than to feel comfortable now. Triggered chorus for Gen Bajwa’s third term has started, so have unsubtle pressures — eyes are now on Imran’s next move.