After much ado, Truss is UK PM

After much ado, Truss is UK PM 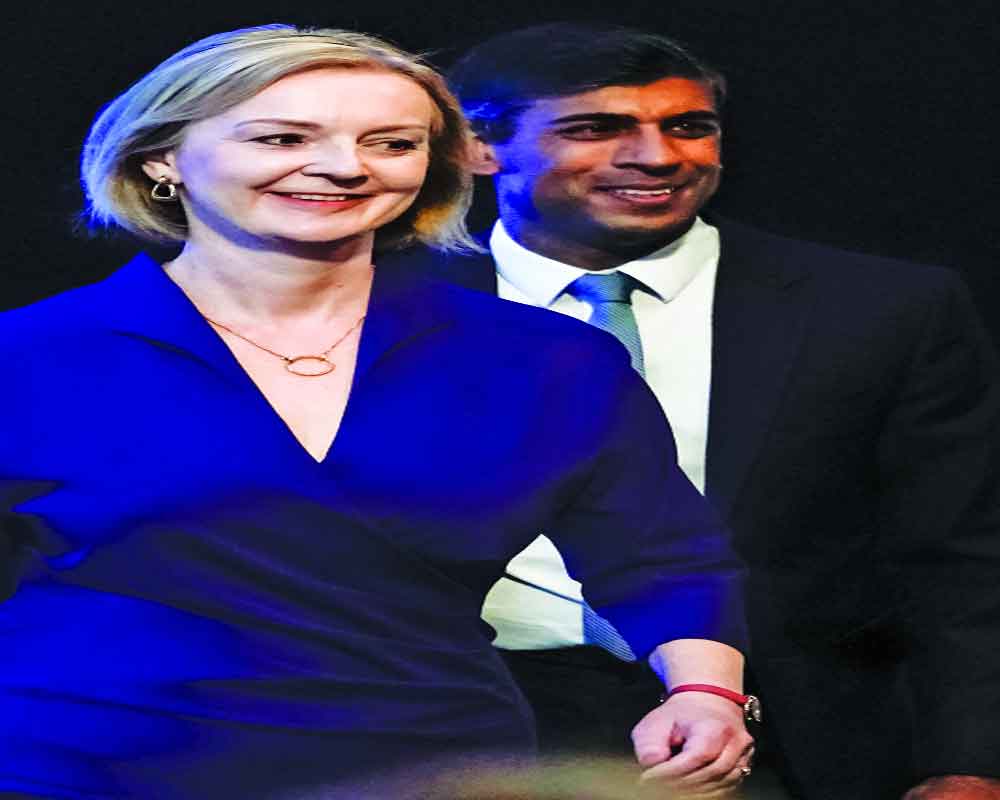 I’m wandering across Scotland spreading time between tasting Scotch, admiring the stunning terrain, imbibing the Scottish way, and witnessing historic political events in the UK from Melrose, on the Scottish-English border. Dominating the news are two events: the battle for No 10; and the embarrassing failure of HMS Prince of Wales to sail.

At 12.30 PM Monday, the Conservative Party at Westminster chose Foreign Minister Liz Truss over Rishi Sunak with a surprisingly small majority to become Prime Minister of Britain following the coup against Boris Johnson in July. Truss’s win was widely predicted and only a miracle could have helped Sunak win. Commentators said they would ‘eat their hat’ or any other item of accouterment was Truss to lose. The UK is not yet ready to have a non-White as Prime Minister.

At 96, the ailing but most loved Queen did not ask the heir to the throne, Prince Charles to swear in Liz Truss, a ceremony that was performed for the first time at Balmoral Castle during her 70-year reign and not Buckingham Palace where thousands of tourists pay Pound Sterling 30 (Rs 3000) for a guided tour. Instead, yesterday the Queen received the PM-in-waiting   Truss for the ‘kissing of the hand’,  forming the government, and a photograph. In 1908, King Edward VII gave an audience to Herbert Asquith when the monarch was relaxing at the French coastal resort of Biarritz. Both Truss and Sunak had agreed to meet the Queen wherever she was, with Sunak adding: “the PM serves her Majesty”. For Indians, Sunak reaching so close (and yet so far) to becoming PM must be something to celebrate.

On 27th August, the Daily Telegraph put out a two-page supplement for its guesstimate of the Truss cabinet. Expected for the three most senior posts of Chancellor, Home Secretary, and Foreign Secretary are Kwasi Kwarteng, Suella Braverman, and James Cleverly. Kwarteng is a free marketeer and a consistent political ally of Truss. Together they have advocated low taxes, low regulation economy, and minimum governance. John Redwood and Jacob Rees-Mogg are likely to assist the Chancellor. Braverman will have the challenging mission of ending illegal immigrants across the Channel (last Sunday 1061 crossed over). She’s known to have favoured their deportation to Rwanda, since suspended by the courts. Braverman, a child of Kenyan and Mauritian immigrants had described the British empire as “on the whole, a force of good”. For Foreign Secretary, Truss’ likely choice and replacement are James Cleverly assisted by Tom Tugendhat, who was one of the PM aspirants. Cleverly was a junior minister in the Foreign Office. Tugendhat, a former Army officer, and like Truss a China hawk is chairman Foreign Affairs select committee.  Ben Wallace, the current Defence Minister, is likely to keep his job. He has advocated a higher defence budget which agrees with Truss’pledge to raise it to 3 per cent of GDP. Some other ‘likelies’ in the Cabinet are Sir Ian Ducan Smith as leader of the House, Nadeem Zahawi whose leadership bid failed spectacularly, as Health Secretary, and Ranil Jayawardene of Sri Lankan descent as Environment Secretary. Whether Sunak will be in is the big question. He has said he wants to support the Conservative Government in “whatever capacity”.

Sajid Javed who triggered the coup against Boris Johnson and later backed Truss may be rewarded with a ministerial post. Big names likely to be left out are Rishi Sunak, Dominic Raab,  and Alok Sharma. The Truss government faces enormous economic challenges especially meteoric energy bills. While the pound sterling is struggling, funding the National Health Service is the other big challenge. The never-ending row with France is back in the spotlight. When asked last week whether she considered Macron a friend or foe, Truss replied: ‘the jury is out’. Macron’s response: ‘The UK is a friendly nation, regardless of its leaders’. Macron added: ‘if Britain and France cannot determine whether they are friends or enemies, then we are heading for serious problems.

An embarrassing event that Britain could have done without last week was the failed maiden voyage to the US of the UK’s largest (65,000 tonnes) aircraft carrier, HMS Prince of Wales, dedicated to Nato. Earlier this year, the second aircraft carrier, Queen Elizabeth, was on a long tour of the Indo-Pacific which included exercises with the Indian Navy. A British Gurkha veteran I spoke to, was puzzled about the four-year Agnipath scheme. Operation BoJo (return of Boris Johnson as PM) many Brits feel, could happen before Christmas following a no-confidence vote in Truss so that he can lead Tories into elections in January 2025. Labour is ahead in the recent polls. India is hoping the FTA under India-UK Comprehensive Strategic Partnership due by Diwali will happen and the price of Scotch will be deregulated. Cheers from Melrose!