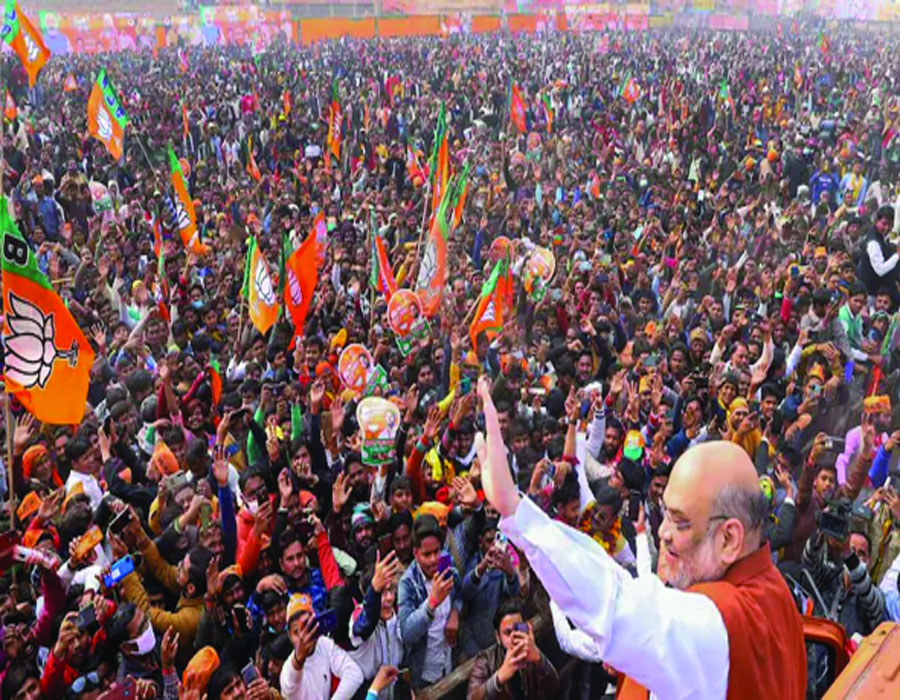 The polls are a contest between Brand Modi and the entire Opposition, being held during the mid-term of the Prime Minister’s second innings

The Election Commission has sounded the poll bugle for assembly elections in Uttar Pradesh, Goa, Punjab, Manipur, and Uttarakhand. BJP is ruling in four of the five States except for Punjab. In Goa and Manipur, though, Congress emerged as the single largest party in 2017 but BJP managed to form the government by dividing the other parties.

Nearly 18.34 crore electors, out of which 8.55 crore are women electors, and 24.9 lakh first-time electors will participate in the five states, including Uttar Pradesh. Women and youth voters will have a bigger say in the poll results. Significantly, the voters will exercise their franchise amid a surging third Covid-19 wave.

Why are these polls crucial? With a multi-cornered contests in almost all the poll-bound states, polls will indicate the direction for the future. It is significant that Prime Minister Narendra Modi is hoping for a hat trick in the 2024 Lok Sabha polls. BJP is trying to retain Uttar Pradesh, which has 403 assembly seats. It also has 80 Lok Sabha seats. Whoever wins UP has a significant advantage in bidding for power in 2024.

Secondly, it is a contest between brand Modi and the entire opposition. It is also held during the mid-term for Modi’s second innings. As the country copes with the continuing Covid-19, it will be a test for the prime minister to ensure that his popularity is intact. He might have an advantage over a divided opposition.

Thirdly, BJP depends totally on Modi as the party has not developed any strong state leaders except in UP. The Prime Minister is its biggest poll mascot.

Fourthly, it will also be a test for the incumbent UP chief minister Yogi Adityanath. He is staking all to win the state again, whereas in the 2017 polls, he was merely an MP and the party chose him after the elections. He has spent huge money on advertisements for propagating his achievements in the past few months. But historically, no one has won a second term since 1985 in the State.

Fifthly, it will be a fight for survival for all regional players like Akhilesh Yadav, Mayawati, Priyanka Gandhi, Jayant Chowdury. In UP, Samajwadi Party chief Akhilesh Yadav sees the fight as a real contest between SP and BJP. However, the opposition is at a disadvantage, because of the multi-cornered contest. Samajwadi Party and Bahujan Samaj Party have fared poorly since 2014. BSP chief Mayawati has been quietly working for her return. Priyanka Gandhi is the face of Congress but she is yet to prove her vote-catching capacity. After the death of RLD leader Ajit Singh, his son Jayant has not yet established himself.

In four states- Punjab, Manipur, Goa, and Uttarakhand- there will be a direct contest between Congress and BJP. Any win for Congress would upset BJP’s cart. The party should at least retain Punjab and grab Uttarakhand. Besides, two other regional parties, AAP and Trinamool, are also testing their luck.

Sixthly, political parties exploit caste, religion, development, and covid handling as issues in these polls. Caste has always been a factor in the northern belt, as people cast votes for their caste. BJP will be touting the building of Ram Mandir in Ayodhya. On August 5, 2020, Prime Minister symbolically laid the foundation with a 40 kg silver brick for the Ram temple. For the voters who believe in religion, this is a big issue. Kashi Viswanath temple also had a facelift. BJP touted this as a golden chapter in the party’s history.

Eighthly, the results might impact the upcoming presidential polls in June-July, since the MLAs form the electoral college. These results will also decide the fate of 680 Assembly seats in these five states and 19 Rajya Sabha seats.

Last but not the least, the handling of Covid and the advent of the third wave would directly impact ruling BJP at the Centre and in BJP-ruled states. Inprevious assembly polls held in the first half of the year, the ‘Netas’ who addressed huge poll rallies were considered the super-spreaders.   This time the Election Commission has banned physical rallies to check the spread of the pandemic.

On the whole, the polls would be a nail-biting event for all stakeholders. March 10 will reveal whom Dame Luck will favour.