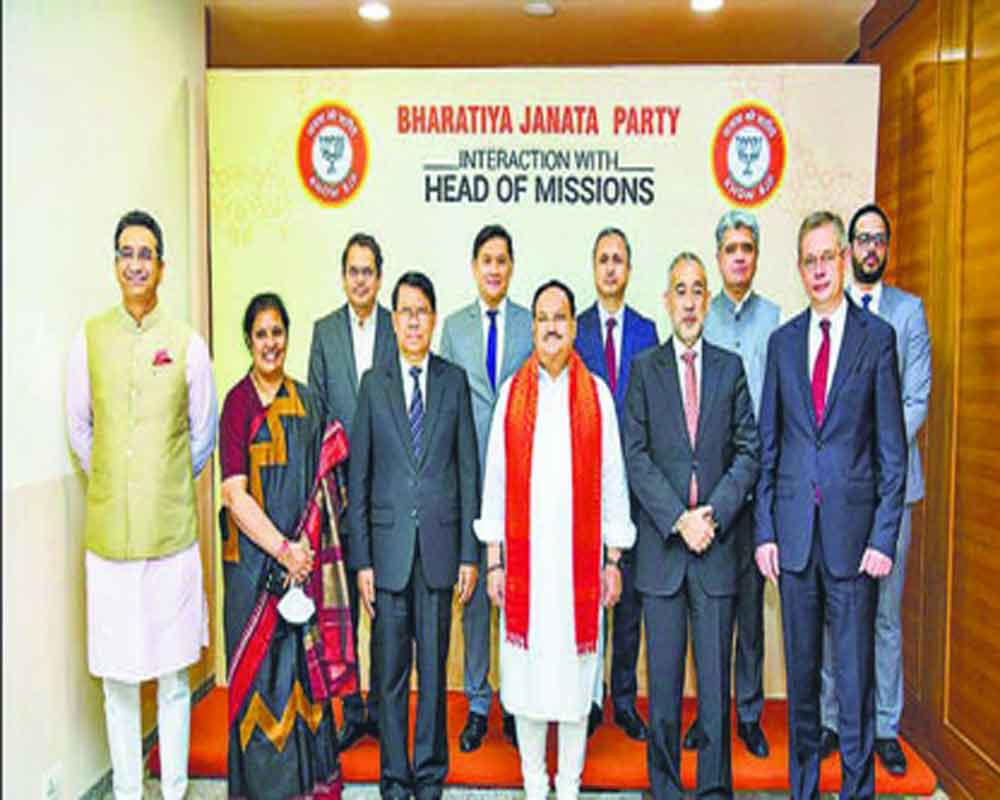 The BJP being one of the representatives of democratic ideals of India, outreach with foreign and domestic constituents has been a constant for the party over several decades. Technology has recently emerged as a force multiplier. The world has for long been watching democratic evolution in India. Foreign commentators have interpreted the noise of democracy in India in different ways. Some sections have even fallen prey to the biases which coloured their writing on India. Some, however, have been genuinely unaware of the various facets of Indian democracy for many reasons, including distance and lack of communication.

Biases, prejudices, and preconceived notions are the key challenges that the BJP has sought to address in its outreach to diverse audiences. ‘Know BJP’ is an initiative of the ruling party to give insights into party’s functioning to foreign diplomats.

In the third meeting, the BJP president gave a detailed view of BJP’s policies and programmes to the envoys of six countries, including those from Russia, Tajikistan, Uzbekistan, Turkey, and Laos. The second part of ‘Know BJP’ exercise took place close on the heels of Raisina Dialogue, which was attended by foreign ministers of 14 countries, diplomats, foreign affairs commentators and other stakeholders, including those from the US, Australia and Israel.

The two events were independent of each other but complemented each other in furthering the national interest.

The latest phase of direct communication was held with the diplomatic community from the Central Asian countries with whom India has age-old ties, dating back to the first global outreach by the emperor Ashoka, whose pillars were installed in these countries. The Raisina Dialogue saw Jaishankar in his element while reiterating India’s worldview and confronting the narrow perspectives of some of the key foreign commentators to the immediate flashpoint in the Russia-Ukraine war.

Indian perseverance to make the world take note of the wrongs perpetrated on the South Asian subcontinent has begun bearing fruit with the emergence of greater understanding about the pitfalls of an expansionist China. For decades, it has been causing problems on the Line of Actual Control on the eastern front of India, while Pakistan exports terrorism as its state policy on the western front.

This global understanding has come on the back of discreet but uninterrupted dialogue by the leaders of India with their foreign interlocutors. This was first set in motion by former PM Atal Bihari Vajpayee. The Jaswant Singh-Strobe Talbott dialogue, which went on for several years, had laid the foundation for the Indian pivot in Asia for the US, which also augmented the global outreach of India.

Notably, former BJP chief and deputy PM LK Advani had set in motion the party’s foreign outreach by creating a foreign cell and the overseas friends of the BJP, which are playing important roles in the outreach, who in turn have become vocal advocates of Indian national interest. Deployment of technology for outreach by the BJP in the last one decade by tapping the full potential of social media platforms has given a boost unseen in the past.

In PM Modi, the Indian diaspora got the perfect voice for Indian national interest. Predictably, the interactions with the diaspora are a regular feature during his foreign visits. So, while Vajpayee laid the foundation for the connect with the world, Modi has upgraded it by building a grand edifice of an India that’s connected with every corner of the world—from developed countries to island nations, from the African continent to the developing nations and the immediate neighbourhood. He has deployed full resources to build relationships of a reliable and dependable friend.

For many, the BJP is a relatively new political party, for they have been used to seeing Congress in power for decades. The BJP gained full majority in the Lok Sabha only in 2014 under the leadership of Modi. This happened again in the 2019 general election. While Vajpayee led the government within the coalition limitations, PM Modi has the unprecedented popular mandate to unlock India’s fullest potential. The Modi-led government at the Centre has carried out a legislative agenda which was earlier seen as impossible.

Revocation of Article 370 of the Constitution, which gave a special status to Jammu and Kashmir. Then the archaic practice of triple talaq among the Muslims was discarded; this caught the attention of many in the world. Such political will to carry out hard reforms is tough to find even among many world leaders. This fuels curiosity of foreign commentators in the BJP and its leadership; this has necessitated a creative outreach strategy, so that we could keep pace with the fast-changing global narrative.

The outbreak of Covid-19 tested the characters of national leaders of several countries. India with over one billion population was seen by many as too vulnerable to the deadly pandemic. But the incumbent Indian leadership proved equal to the task; in fact, it excelled in its response with two made in India vaccines that shielded not just Indians but millions in several countries. The neighbouring countries remained solely dependent on India.

PM led the outreach at the policy front, holding consultations with the scientific community to find answers to the looming challenges in the form of Covid-19. India showcased why the country is the pharma capital of the world, with the Brazilian President Jair Bolsonaro expressing gratitude for the medicines and vaccines by equating the efforts with Hanuman carrying the ‘Sanjeevani Booti’ for injured Lakshman.

The BJP’s outreach with the poor during such trying times shaped the party’s deep social drive in the form of distribution of dry ration kits to millions of people during lockdowns and thereafter. BJP workers ran community kitchens across the country. Blending of the social and political work further helped the endeavour.

Dialogue and dissemination are in the DNA of the BJP and its parent organization, the Rashtriya Swayamsevak Sangh. Foreign commentators have their misgivings about the RSS and the BJP because of the long-term narratives fed to them by the political rivals and the well-entrenched ‘Left-liberal ecosystem.’

RSS Sarsanghchalak Mohan Bhagwat held extensive interactions with the representatives of the foreign media at Vigyan Bhavan a few years ago where he responded to all the questions. He explained to them the worldview and functioning of the organisation.

The BJP leaders have their ears to the ground; outreach helps them know the pulse of the people. They are not the prisoners of history; they are willing to walk the tough road.