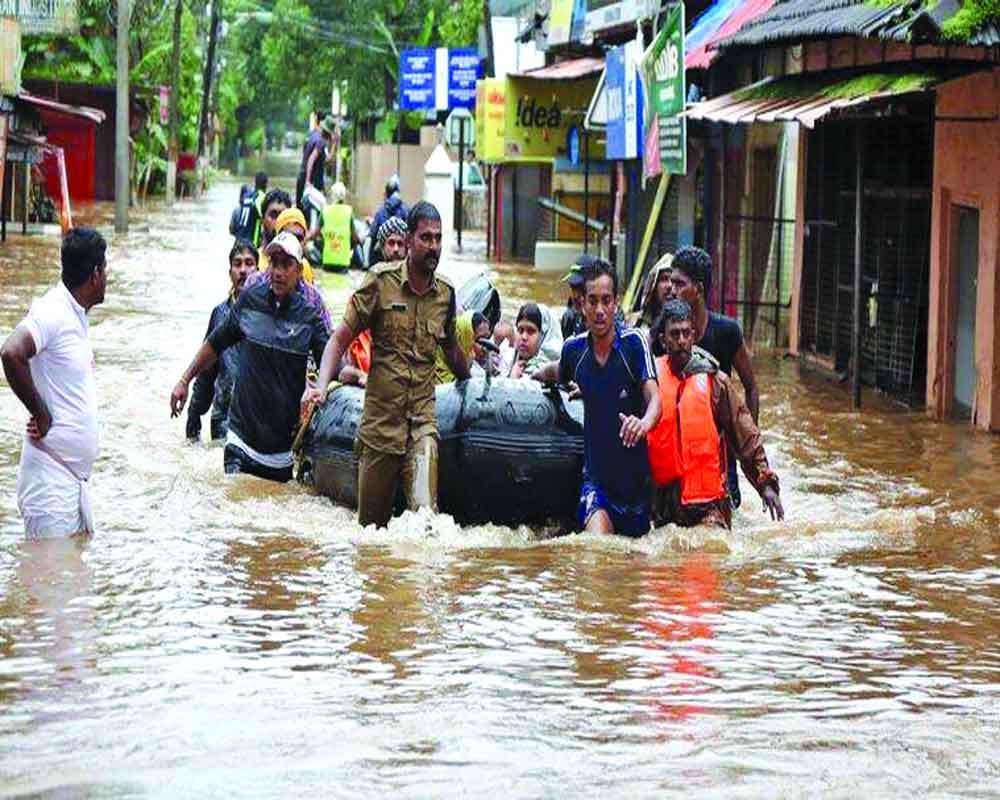 Amid rising disaster risk threats to infrastructure, the world plans massive investments of $94 trillion for disaster resilience in the India-initiated Coalition for Disaster Resilient Infrastructure (CDRI).

The catch line is what the world invested in 200 years is to be accomplished in 20 years.

The global infrastructure investment is estimated at $2.7 billion a year. Insurance giant Lloyds was quoted as saying 12 percent funds are getting lost in disasters and 88 percent funds going into rebuilding. A disaster related to weather, climate or water hazard occurred every day on average over the past 50 years - killing 115 people and causing US$ 202 million in losses daily, according to a new report of the World Meteorological Organization (WMO). The costs are to rise as inflation rises and interest rates hiked.

Prime Minister Narendra Modi says that infrastructure is about people and providing them high quality, dependable, and sustainable services in an equitable manner.

The fourth International conference of CDRI in New Delhi does not focus on financing but sees infra plus green nature in totality through integrated approach of community-based efforts. An effort to save public fund! Many cities across the world and island nations are at great risks. In India, for example, cities like Bhubaneshwar, Vishakhapatnam, Chennai and Kolkata are perceived to be at climatic risk, says Kaushal Kishore, member-secretary of NDMA, the co-chair of ICDRI says.

It is stated that the existing methods and tools of disaster risk reduction, and climate risk management in particular, provide powerful capacities for substantially reducing risks and adapting to climate change.

In focus are healthcare post pandemic, earthquakes, floods, rising cyclones in India's east and west coasts and looks at the destruction of telecom towers, roads, ports and urban infra. At least $10 billion is required immediately for poverty reduction and flagship healthcare. What are to be saved are telecom towers, power plants, digital infra, transportation and communication.

The experts discuss various earthquakes, floods and cyclones in Haiti, Nepal, Pakistan, and Peru. Kamran Akbar of World Bank says, "disaster brings the best and worst of the people" for reconstruction to restoration of livelihood. They build blocks and reconstruct the local infra. The finances definitely have to be fine-tuned.

Furthermore, new changes, such as Arctic ice melting, are happening faster than was predicted by the IPCC reports. It seems that the future is more serious and challenging. Such meets discuss whether this can be stopped with pouring of funds and sharing by large private entities.

The 2011 Fukushima nuclear accident in Japan built on a quake-prone area, close to the sea could have been prevented had it been built elsewhere. Not much is known to have been discussed about problems of the Three Gorge Dam of China that often overflows and leads to accumulation of massive turbid water. There are instances of severe Kerala floods due to dam busts, changing river courses and topography. Now India builds nine major dams including in fragile Aruanchal, Manipur and Mizoram.

The most circumspect opinion on finances comes from Africa.  The Ghana chief director, ministry of environment, Cynthia Asare Bediako, wonders how to create the fund for reducing carbon emission. She says climate change has no boundaries and how to forge policies that can help most challenges of sustenance, livelihoods and jobs. She wonders on private participation and if the CDRI could help. The African Development fund officer Surminsu calls for relook at policies as also on sustainable energy that is the first to break during a disaster. Poor countries need tech transfers that CDRI stresses.

Vandana Kumar, secretary, renewable energy ministry, says that India is taking steps to create the hydrogen support, its storage and transportation issues and the green energy to the world.  Rangan Banerjee, IIT, Delhi, says research is needed to build the hydrogen road map. Dr Uwe Remme, head hydrogen IAEA, says it is not easy technology and has high cost. Kishore releasing paper on hydrogen perspective says challenges are huge as also unclear on the governance to be needed vis a vis traditional power system.

Nobody can prevent climate change but for its sake the world cannot also plunge into investing sums into an abyss. Infra funding has large leakages and that has to be plugged to save the poor from further slipping into deep crisis. Discreet funding and protecting fragile ecology would create the dreamt resilient infra development and not the big projections.