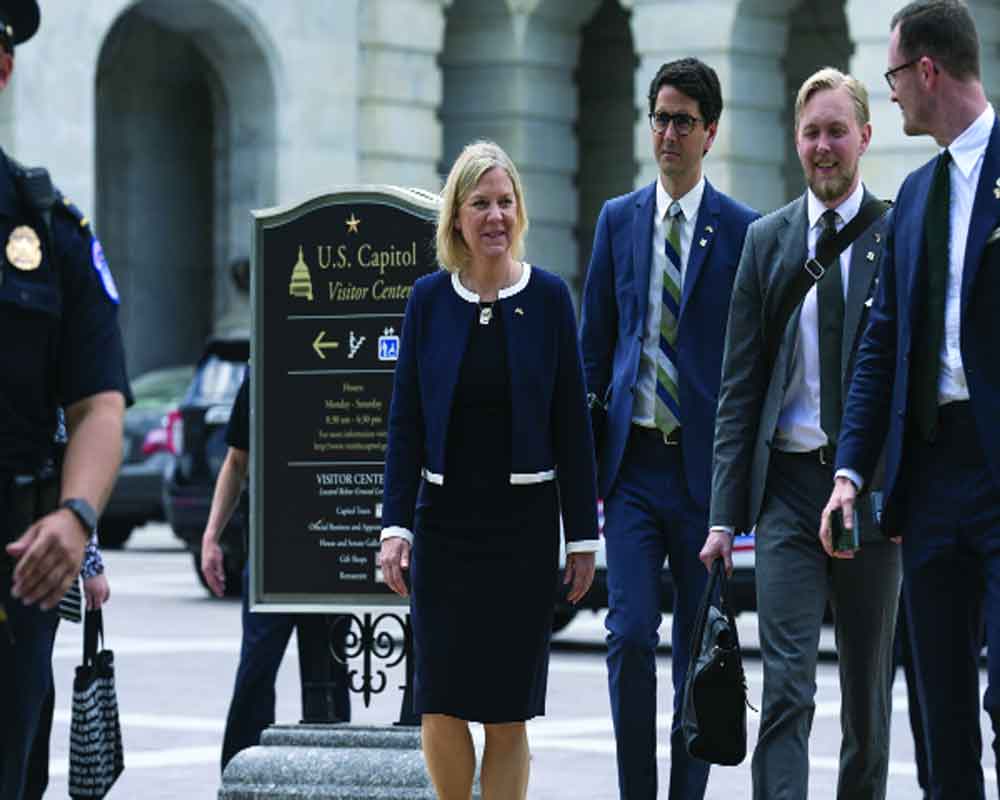 Finland and Sweden’s bid to enter NATO has met with roadblocks. Initially, Russian President Vladimir Putin warned them against their efforts, but now he has changed his strategy towards NATO’s two probable entrants. Now, Moscow has no problem in Finland and Sweden joining the US-led military alliance as long as the NATO doesn’t move more troops or hardware into the territory of Finland and Sweden. But the real challenge is from Turkey which is hell-bent on preventing the two Nordic nations from joining the NATO as it considers them “focus of terror, home to terror”

The crisis in Ukraine is rebalancing the power calculus in Europe and in the rest of the world. It’s the first major devastating war that Europe is experiencing after the Second World War. Currently, what seems to be more disturbing is the determination of two Nordic nations — Finland and Sweden — to join the North Atlantic Treaty Organization (NATO). After years of neutrality in Scandinavian countries, the sudden decision of the two neighbours of the Russian Federation to join the NATO is heightening tension between Moscow and the rest of the West. Despite threats from Moscow, Helsinki and Stockholm have moved their applications to be a part of the world’s largest security alliance. The time chosen by the two nations to be part of the NATO security orbit is creating ripples across Europe.

After the Second World War, the world was turned into two rival ideological camps of power: the capitalist bloc led by the US and the socialist bloc by the USSR. For more than four decades, there were years of high and low, with tipping points like the Cuban Missile Crisis. The period saw the emergence of the Cold War between the West and the USSR and its allies.  But then the fall of the USSR leading to the dissolution of the Communist regimes in Eastern Europe formally hinted at an end of the Cold War. During the Cold War period, Finland and Sweden maintained their neutral stance. They neither went to the NATO nor signed the Warsaw Pact (Warsaw Treaty Organization or officially, the Treaty of Friendship, Cooperation and Mutual Assistance founded on 14 May, 1955 in Warsaw). But once the Warsaw Pact terminated on 1 July, 1991, the security alliance of European nations, particularly in Eastern Europe, underwent massive changes. For the first time in the post-Warsaw Pact scenario, on March 12, 1999, Czech Republic, Hungary and Poland joined the NATO; the second wave countries such as Bulgaria, Estonia, Latvia, Lithuania, Latvia, Slovakia and Slovenia joined in March 2004.

Interestingly, out of the five Nordic nations — Iceland, Denmark, Norway, Sweden and Finland — the first three joined the NATO as its founding members in 1949. Therefore, Sweden and Finland maintained their distance from the NATO for a long time so as not to attract the ire of the then USSR and now the Russian Federation.

The Social Democrats of Sweden has jettisoned their previous opposition to NATO membership with Putin’s onslaught in Ukraine in the current scenario. Magdalena Andersson, the Swedish Prime Minister, said, “The best thing for the security of Sweden and the Swedish people is to join NATO. We believe Sweden needs the formal security guarantees that come with membership in NATO.”

Why is Putin scared of NATO expansion? In the past, the USSR had bitter experience of the expansion of the West, particularly after the dissolution of the USSR. The way the US-led NATO has encircled Russia, it has become a cause of concern for Moscow. In fact, the NATO has violated its basic understanding with Russia. And the NATO has not addressed the security concerns raised by the Putin regime till now. Therefore, Moscow cannot trust the NATO.

While, powerful nations such as France and the US are welcoming the decision of Finland and Sweden to join the NATO, why is Turkey — NATO’s oldest member — objecting to it? Turkey possesses the second largest armed forces after the US in the NATO. Turkish President Recep Tayyip Erdogan is determined to stop Finland and Sweden’s bid for the NATO membership. He has said he won’t allow terror havens becoming part of the NATO. Turkey’s objection stems from its security concerns and grievances with Sweden and to a lesser degree Finland’s perceived support to the banned Kurdistan Worker’s Party or PKK. Turkey’s long war with the PKK has taken tens of thousands of lives since 1984. Therefore, Erdogan has branded the two prospective NATO members, especially Sweden as a “focus of terror, home to terror”. He accused the two Nordic countries of giving financial and armed support to the PKK. However, the NATO officials are ready to address all the concerns of Turkey and making the road smoother for Finland and Sweden to join the NATO.

Initially, Putin was airing warning signals to both Finland and Sweden. But gradually, he is changing his mind and strategy towards NATO’s two probable members. Now Moscow says that it has no problem in Finland and Sweden joining the US-led military alliance. But Putin has made it clear that Moscow would take action if the NATO moves more troops or hardware into the territory of Finland and Sweden. To him, NATO expansion itself is not a threat for Russia. Putin, however, has clarified, “The expansion of military infrastructure into this territory (i.e. in Finland and Sweden) would certainly provoke our response. What that response will be, we will see what threats are created for us.” This all makes it clear from Putin that in case the West tries to provoke Russia, he will not sit back. And for all of us, the latest war in Ukraine should be a lesson.

Mikhail Gorbachev, Boris Yeltsin and Vladimir Putin, the three leaders had overseen the transformation of the Russian Federation from the last days of the USSR to the emergence of the Russian Federation. Both Gorbachev and Yeltsin initiated changes that clearly broke with the communist ideology and Soviet political system of the past. But Putin came to Russian politics when the massive and tumultuous transition from communism had already made its way all over the fallen super-power. Since 1999 when he took over as the Prime Minister of the Russian Federation under the leadership of Yeltsin, many brand him as an agent of the restoration of the old order. Also, Putin, a former spy guy, has made it known to people that he shares with many Russians a great nostalgia for the greatness created, established and heralded by the Soviet Union.

Unlike Yeltsin, Putin did not have extreme distaste for the Communist Party of those days. Equally, Putin aims to enhance the power of the Russian State and wants to expand as far as possible beyond its borders. But the problem is that Putin has combined his ambition with realism and wants to achieve the same with force. Therefore, the raising concern in Finland and Sweden is well-understood.