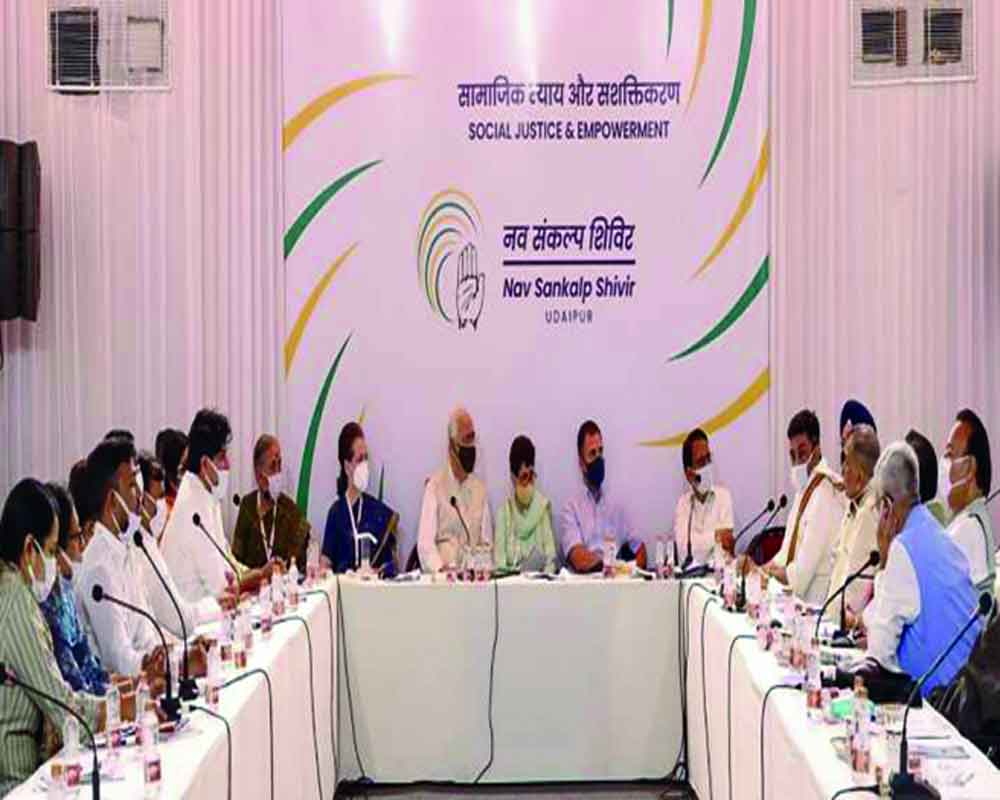 Though the Gandhi loyalists demanded that Rahul should become the president again, the Udaipur declaration was mum on it

Where does Congress go from Udaipur Chintan Shivir? Was the conclave an exercise in futility, or will it revive the party?  It all depends on the implementation of the decisions taken at the conclave. Congress President Sonia Gandhi said that the Shivir should not become a ritual. “I request your full cooperation in ensuring that the single overriding message that goes forth loud and clear from Udaipur is one of unity, cohesion, determination and commitment to our party’s accelerated revival,” she said. The much-needed conclave has come after nine years.

The timing of the conference is amid serious issues raised by the G-23 rebels after continuous defeat, including leadership crisis, organizational revamp, revival, and election strategy. Also, the party has lost contact with the common man. Perhaps to rectify that, the Shivir has announced a padayatra from Kashmir to Kanyakumari to reconnect.

In Udaipur, the party came up with recommendations in six broad areas, with six senior leaders heading each group. They are organization revamp, political issues, economy, social justice, welfare, education, and employment. The Congress Working Committee on Sunday approved most of the recommendations for organizational reforms. These include one family, one ticket rule, 50 percent representation for those below 50 years of age at all levels, including the CWC, and a five-year term limit for those holding positions at all levels. Needless to say that the Gandhis are exempt from all rules.

However, what is missing is more glaring. For instance, one of the most critical issues is the leadership crisis at the top. Rahul Gandhi resigned as party chief on August 6 after the party lost the 2019 polls, and Sonia became the interim party chief. Though the Gandhi loyalists demanded that Rahul should become the president again, the Udaipur declaration was mum about it.

The second is about one family- a one-ticket decision. One must recall how after the 2019 poll results, Rahul Gandhi had criticised senior leaders

like Ashok Gehlot and P Chidamabaram for working for the success of their families. Congress should shed dynastic politics.

The third is about reviving the Parliamentary board, which is one of the demands of the rebel group G-23. After P V Narasimha Rao took over as Prime Minister, he wound up the Board in 1992. Though the sub-group recommended the revival of the Parliamentary Board, the CWC rejected it. Instead of activating the existing party constituents like the Mahila wing, NSUI, Seva Dal, and others, the conclave also decided to constitute new departments of public insight, election management, and cadre training to make the party battle-ready.

Fourthly, the political resolution left a door open for alliances.

Congress could not form its government since 1998, and after the emergence of regional powers, it is more dependent on coalitions with them to oppose the BJP. Congress had not been in power in UP since 1989, Bihar in 1990, Tamil Nadu in 1967, West Bengal in 1973, Odisha since BJD came to power, Andhra Pradesh, and Telangana since 2014. Sonia Gandhi brought the Congress-led UPA to power in 2004 and 2009.

The party has almost no presence in around 180 Lok Sabha seats. Even as a junior partner, it needs to form alliances to be a formidable challenger. The contradiction is that Congress cannot come to power without gaining, and yet it cannot do so without coming into conflict with its allies.

Congress should have identified where the BJP is weak and formulated a poll strategy for 2024 with or without alliances. The BJP has not been able to penetrate the East and South despite constant efforts.

Last but not least, the Shivir has shown that the party cannot be without Gandhis. This year, the preliminary test will be in Gujarat and Himachal Pradesh, and then states like Karnataka, Rajasthan, Chhattisgarh, and Madhya Pradesh will go to the polls in 2023. These are the principal states where the Congress has to perform better and win elections to pose a challenge to the BJP in the 2024 general elections

But for that Congress should focus on a new narrative, clear ideology, tactical alliances, leadership, and resources- all of which it lacks. Congress needs major surgery, not merely a makeover, to stay afloat and grow further.