COP27: Chaos, confusions and road ahead

COP27: Chaos, confusions and road ahead 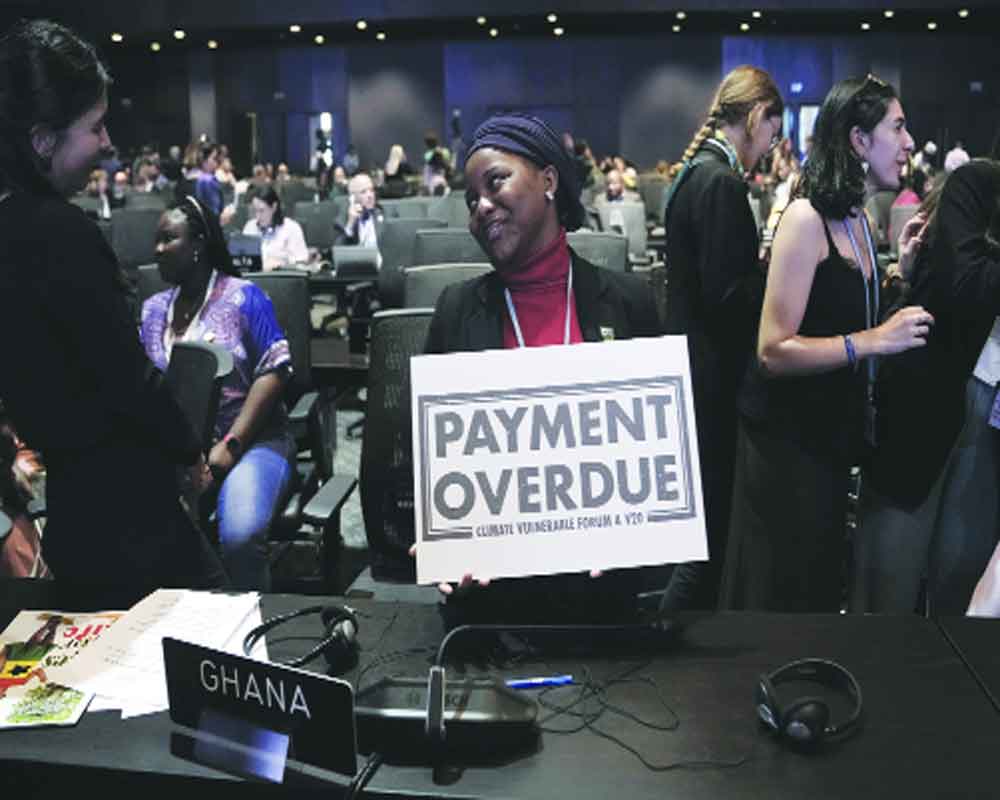 World leaders and global governance institutions should not make hollow promises. Because the inhabitants of this planet are in grave danger, slanging match will not help anyone

Against the backdrop of intensifying climate change that promises not to spare anyone from its catastrophic consequences, global leaders are discussing what actions can be taken to prevent or at least minimise the damage to the ozone layer, at COP27, hosted in Egypt’s picturesque island of Sharm el-Sheikh.

The UNFCC and the IPCC have been sending constant warning signals to the world community regarding some irreversible process of climate change. Unless the world, particularly the big industrialised nations, realise the gravity of the situation aggravated by their deviant behaviour, there is no point talking about climate solutions in global meets like the COP27 and may be again in the COP28.

Therefore, COP27 is once again heading towards uncertainty. The last COP meeting at Glasgow in the UK was supposed to bring substantial changes. The power players made extraordinary pledges, but nothing has taken place so far. The greenhouse gas (GHG) emissions have been on the rise.

Why is climate finance so important? A climate solution corpus is very crucial for the developing nations to further stop the depletion of the ozone layer and mitigate the worst effects of climate change. The rich nations have been promising that they will offer an aid of $100 billion each year towards this cause. But so far it has remained a lip service. If the rich nations continue to dawdle on the promised climate fund, they leave the planet and its inhabitants in lurch. The big polluters like the US, China, the Russian Federation and the EU must understand that they are pushing the world towards a dangerous future. Unless they offer this financial aid, the less-developed nations, the Vulnerable-20 group and the island nations belonging to the Pacific Vuvale would be in permanent danger of destruction. Of course, they all will be the permanent victims of the developed nations and the emerging economies.

Rubbing salt into the post-Covid world’s wounds is the devastating war in Ukraine. And on top of that China’s rising aggression in and around Asia is threatening both the global power calculus and peace around the globe, thus jeopardising the efforts to give an undivided attention to climate solutions.

And therefore, climate activists have been left disappointed at COP27 also. Staring at the dark future, activists from Africa have accused rich countries of trying to bribe the African leaders to invest in planet warming fossil fuels. To them, it is yet another hypocrisy that the developed nations have employed to make Africa unwitting partners in their climate crimes.

Therefore it seems global climate diplomacy is failing the world. Whether it is at the UN or at any other global forums like the G-7, G-20, the OECD, EU or any platforms, all are making a mockery of the developing nations. Their meetings and numerous conferences are making no breakthrough to save this planet. Amid all these, the big power rivalry is spoiling the current debates and dialogues. The New Cold War between the US and China is ruining all the chances of the revival of the health of the planet earth. Both the nations are fighting at different levels to bolster their influences and domination at global institutions. In fact, China is desperately trying to push back the US to occupy the top slot in global governance. Chinese President Xi Jinping is widening his wings everywhere. He is a megalomaniac. His ambitions have no end. He wants to grab the whole world and resurrect the old Chinese Empire. He has forgotten that the world is now in the 21st century and no one is living under the illusion of Mao Zedong’s great Communist Era.

The world today is well connected by the massive changes of globalisation accompanied by the advancements of information and communication technologies. China needs to reset its own house before venturing out to derail the western liberal order that has been dominating the globe since the end of the Second World War in 1945. It is better for China and the US to compete healthily instead of turning it into a major conflict. And this will unnecessarily delay the mitigation efforts to save the atmosphere. Hope the latest meetings of Xi and Biden against the backdrop of the climate talks and the G-20 would spearhead a new beginning in their relations though major differences would continue for now and even for a longer duration.

The current climate crisis is affecting global health. A recent report by the Lancet journal says that there is a direct link between the changing weather conditions and their impact on the health of the people around the world. This report clearly says that our dependence on fossil fuels increases the risk of disease, food insecurity and other sickness related to extreme heat. These incrementals are too dangerous for all of us. The point here is that there is no place to hide now. All are affected, from Iceland to Madagascar and from China to the US.

It is clear that the advanced countries are holding back the future of the developing nations. It is not that people in these countries can wait for the tall promises made by the developed nations. However the hope is that strong and sustained reductions in emissions of the CO2 and other GHGs could rapidly make air quality better. And if it happens, then another 20-30 years, the global temperatures could stabilise.

There is no point of discussing who is responsible for the current chaos. Blaming the developed nations will not work. The point is to make the amends. All governments, local, national and the global, must work together to reduce the use of fossil fuels. The blame game won’t help the vulnerable nations and the people on the fringe. We have come to such a point that now the Pacific Vuvale group is approaching the UN General Assembly to pass a proposal and can go to the International Court of Justice to seek immediate intervention in the global crisis. This climate justice case will be historic once it goes to the ICJ. Because of these nations, climate change is increasingly violating universal human rights.

It’s time now to act. Not to make sermons. World leaders and global governance institutions should not make hollow promises. Because the inhabitants of this planet are in grave danger, slanging matches will not help anyone. It’s time to take responsibility and to save the earth. The current ecological imbalance must be repaired, else, we all will be in peril.

(The writer is Head of the Department of Arts and Humanities at Geeta University, Panipat)