CYCLING FOR NATURE, WITH SEED BALLS

CYCLING FOR NATURE, WITH SEED BALLS 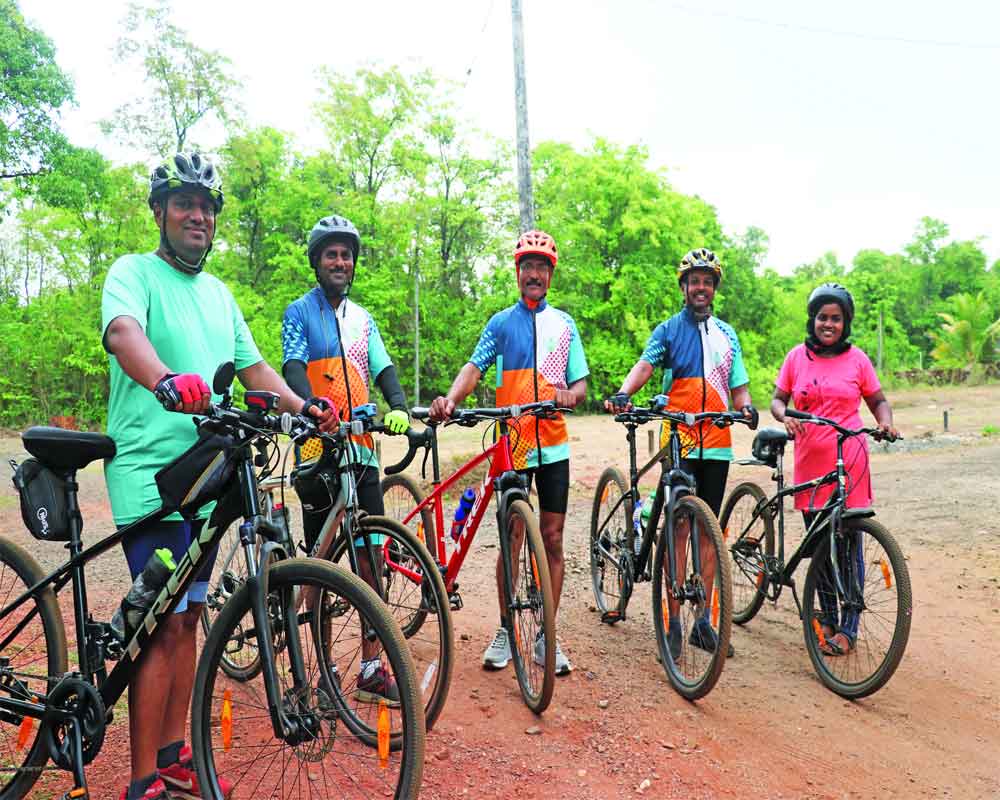 Seeds can be conserved in balls which can help raising trees

As monsoon sets in, we head to the wild for seed bombing of native fruits like mango, jambhul and jackfruit, said Makarand Vaingankar, an owner of a medical store, and Yashvant Bhosale, a treasury officer from Sindhudurg district in Maharashtra. In dry areas, the shape of the seed ball gives enough shade to conserve moisture. Eventually, the seeds begin to germinate, and the ball breaks apart. The small pile of crumbles leads to a rooting system. The plants then mature and produce their own seeds and provide shelter once the second-generation seeds fall to the ground, they said.

Both Vaingankar and Bhosale have been members of Kanak Riders Kankavli, a cycling group, for seven years now. The group has been involved in raising awareness about environmental conservation among students and youth through cycling.

“We use social media to raise our voice against the destruction of biodiversity. We hold meetings with schoolchildren and college students from the Kankavli area about these issues. I am worried, what kind of world will we be leaving behind for children,” added Bhosale.

On Sundays and holidays, the group plans to cover 100 km in a day on cycle. Many students, youth, and their parents join their venture. This has led to a renewed interest in cycling among the population.

While sharing significant moments they experienced while cycling, the group said: “Recently we visited Vravade dam in Kankavli, which is a reserved area. We wade through a thick green cover to reach the dam.” The clouds have descended, and it was a beautiful moment.”

Ever since the group decided to uncover the hidden places in the region, cycling has not only increased environmental awareness among the population but also their health. “A person who had asthma came for a ride with us. There was a steep ascent on our way. He cycled for some time, halted, and used his inhaler, and then he joined again. We were stressed, but he did not give up. Six months have passed since then. He does not use an inhaler anymore and rides for 100 km without any hassle,” said Bhosale.

The group faces a lot of challenges while carrying out their campaign. When they plant trees in open spaces, people from the neighbourhood are often very unsupportive. People ask what we are doing in their precinct. Some have a very myopic view and think that trees are a menace because they get in the way. Even temple authorities object to seed bombing in their vicinity, said the group.

Reflecting on their future plans, the group shared how, despite challenges, they had come together to form an association and approach the administration to find solutions to the growing environmental concerns. Informing about their next campaign, the group said, Murdeshwar Temple is amidst a thick jungle, and there are water bodies around it. But people are defacing the flora and fauna by throwing litter. We will make the administration take note of it. We are also going to hold sessions in schools, colleges and offices across Sindhudurga district.

As a first step towards environmental sustainability, the group urges the masses to be more conscious of actions, as they put it, If you are travelling in the Monsoon, please take seed balls with you. The seeds shouldn’t be discarded, as they can be used to make seed balls. Seeds of native varieties should be sown, not those of exotic species. If 10 seed balls are thrown, at least two will take root for sure.

(The writer is a development worker from Maharashtra: Charkha Features)