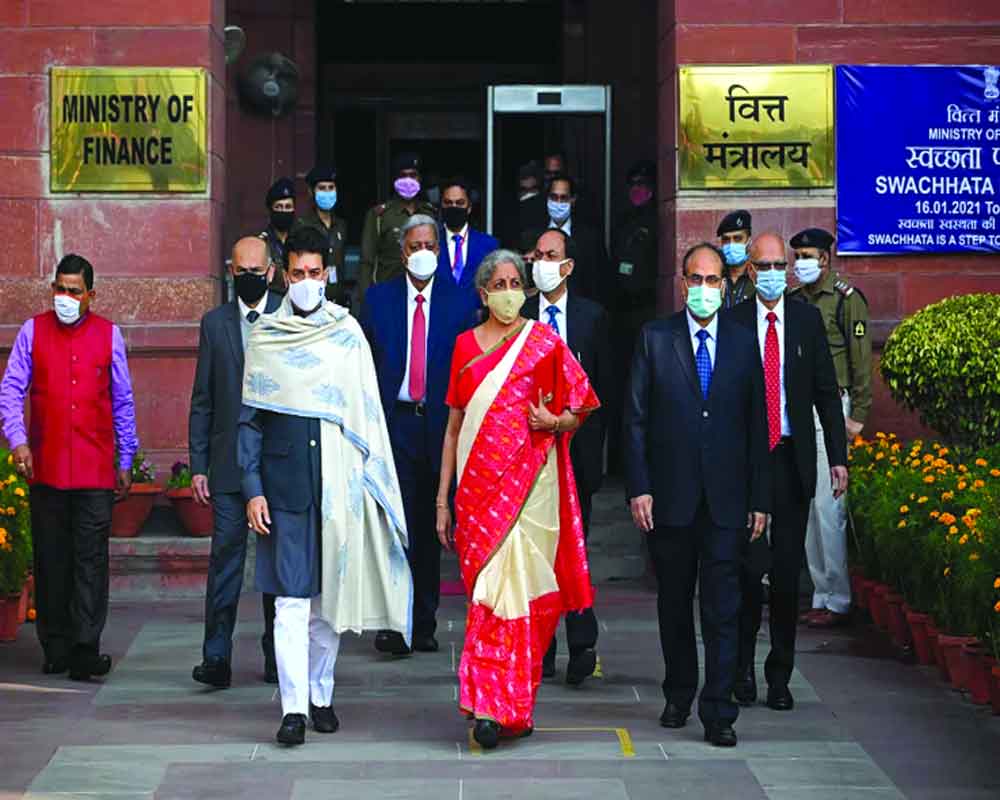 With the financial year ending in two months, the Government is no close to meeting the target of Rs 175,000 crore from disinvestment of Central Public Sector Undertakings set in the Union Budget for 2011-2022. It has so far realized less than Rs 10,000 crore. Even after adding around Rs 100,000 crore, being the expected proceeds from sale of its 10 percent shares in Life Insurance Corporation of India, (on the premise that it goes through before the year-end), there will be a whopping shortfall of Rs 65,000 crore. This is not new.

It is a continuation of a trend seen during the previous six years under the Modi dispensation when in all years except during 2017-18 (in that year, the proceeds from disinvestment of a little over Rs 100,000 crore were slightly higher than the target; courtesy, sale of its 51.11 percent shareholding in oil downstream CPSU Hindustan Petroleum Corporation Limited to another CPSU in the upstream segment, ONGC), the collection was far short of the target.

During this period, the Government laid greater emphasis on ‘strategic’ disinvestment (a sophisticated nomenclature for share sale that reduces its holding in the PSU to below 50 percent). On this front also, the outcome has been disappointing. For instance, during 2015-16, proceeds from sale through this route were ‘nil’ againstbudget provision of Rs 28,500 crore. For 2016-17, the target itself was reduced from Rs 20,500 crore to Rs 5,500 crore.

In the following two years, the target for ‘strategic’ disinvestment could be met largely because of the sale of Government’s majority holding in one PSU to another: 51.11 percent shareholding in HPCL to ONGC in 2017-18 and 52.63 percent stake in the Rural Electrification Corporation (REC) to Power Finance Corporation (PFC) in 2018-19. During 2019-20, 100 percent of its shareholding in NEEPCO and 75 percent in THDC India Limited were sold to National Thermal Power Corporation (NTPC) - another CPSU in the power sector.

These sales can’t be termed as strategic as the purchaser being another PSU namely ONGC/PFC/NTPC, the Government continues to have effective ownership and control over the divested entity viz. HPCL/REC/NEEPCO/THDC.

A number of major strategic sales such as Bharat Petroleum Corporation Limited or BPCL (53.29 percent); Container Corporation or ConCor (30 per cent); Shipping Corporation of India or SCI (63.75 percent) planned during 2019-20besides Air India or AI (and its subsidiaries) - a carry forward from the previous year - didn’t materialize. These sales didn’t happen during 2020-21 also. While, AI et al were sold in September, 2021, sale of BPCL/SCI are unlikely to get consummated even during the current FY.

An overarching reason as to why the actual proceeds from disinvestment have fallen short of the target has to do with the very premise of treating these as a source of revenue (albeit for plugging fiscal deficit) which is flawed. Unlike tax revenue, which can be projected with a degree of certainty, the same cannot be said about proceeds from disinvestment. In this case, a lot depends on the market scenario and, in particular, the perception of investors about the PSU in which share-sale is contemplated.

In cases, where strategic sale is mooted, the Government faces a bigger challenge as apart from a favorable market, it needs bidders with deep pockets. For instance, in case of BPCL (disinvestment in the oil behemoth was originally planned for 2019-20), it needed a strategic investor who could pay around Rs 60,000 crore (prevailing share price multiplied by the number of shares corresponding to 53.29 percent holding).

The lengthy and cumbersome process of approval and bureaucratic red tape further undermines the chancesof the Government kicking the ball rolling just around the time when the strategic investors are ready to put in their bets.

The NITI Aayog identifies companies for divestment which are then considered by the Core Group of Secretaries on Divestment (CGD), a long-drawn process by itself, which takes it to the Alternative Mechanism (AM) - a group of ministers including finance, road transport & highways, administrative reforms etc - for approval. After AM’s approval, the Department of Investment and Public Asset Management (DIPAM) moves proposal for in-principle approval of the Cabinet Committee on Economic Affairs (CCEA). All put together, strategic divestment involves around 12 steps.

Thisleads to delay and by the time, all approvals are in place, the market scenario becomes adverse. In case of BPCL, during 2019-20, the international price of crude oil (fortunes of oil companies move in tandem with it) was hovering around $70 per barrel. But the bureaucrats were not ready. During 2020-21, Covid - 19 spoilt the partyas the average crude price declined to just about $40 per barrel (in April 2020, it had plummeted to a low of $20 per barrel). During the current year,even as the price recovered ruling above $70 per barrel most of the time, the officials are not ready yet again leading to deferment of its divestment to 2022-23.

In the past, successive governments used PSUs as milch cows to serve their budgetary needs. While, extracting high dividend, special dividend, bonus has been a standard practice, during 2004 - 2014, the then UPA - regime went a step aheadusing them to extend petroleum subsidies (for instance, ONGC was asked to give discount on crude supplies to Indian Oil Corporation or IOCL, BPCL and HPCL to enable the latter keep the price of diesel, petrol, LPG, and kerosene low; ONGC gave a total discount of over Rs 200,000 crore during this period). The same mindset drives them to look for revenue even while divesting shares of these undertakings. The ball does not stop here.

The official think tank is ever keen that even after completing the strategic sale, the Government remains in the driver’s seat. A clear indication of this was given by the FM in her Budget speech for 2019-20. Shehad stated the intent was to change the existing policy from “directly” holding 51 per cent or above in a CPSU, to one whereby its total holding, “direct” plus “indirect”, is maintained at 51 per cent.Such a signal deters potential investors.

For the purpose of executing share sale,it should set up a holding company on the lines of a bank investment company recommended by the RBI committee under P Nayak for public sector banks - where all its sharesin the PSUs be vested.The HC to be manned byeminent professionals should be fully empowered and given freedom to take all decisions - in consultation with the management - in regard to valuation, quantum of shares, timing of sale, etc., keeping in mind the market conditions.

In the budget for 2021-22, the finance minister had announced the government’s decision to privatize all CPSUs in non-strategic sectors and undertake privatization even in the strategic sector with a rider of retaining at least one undertaking in the public sector. These efforts will bear fruit only when the process is unshackled from bureaucratic red-tape and budget-making.