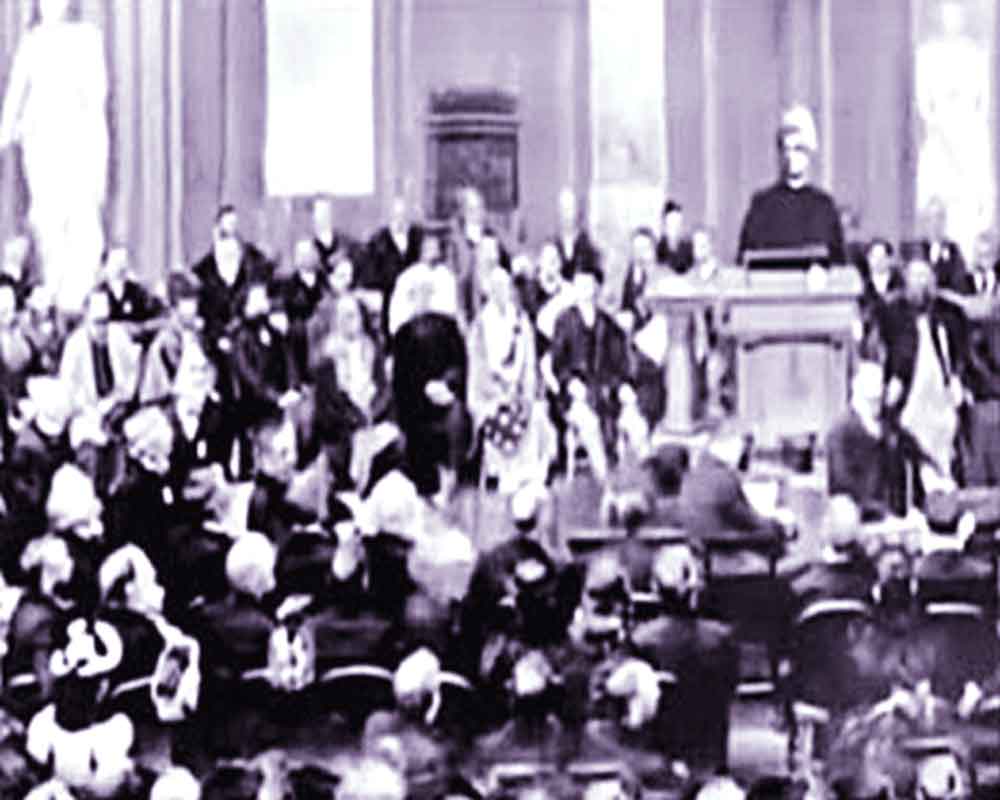 The way to counter the erosion in moral, ethical and humanistic values is to refocus learning process on character formation & value inculcation

The mere mention of Swami Vivekananda inspires and energises the young and old alike. In his sojourn of mere four decades on this planet, he projected ‘true India’ on the global stage and probably, more significantly, to Indians! He comprehended the past, analysed the present and delineated the right strategy for future. The power of ideas and power of imagination are kindled amongst every inquisitive young person when the basics of his philosophy are mentioned. He inspires everyone, including the teacher and the taught — when told that what a man learns is essentially what he “discovers or unveils”. And this occurs when the individual takes the cover off his own soul. He uplifts the spirit of everyone when told that the basic essentials of education, learning and growing up need to be derived on one single principle: “Education is manifestation of the perfection already in man.” No learner could ever contest his assertion on the source of knowledge: “All knowledge that the world has ever received comes from the mind; the infinite library of the universe is in your mind. The falling of the apple gave the suggestion to Newton, and he studied his own mind. He rearranged all the previous links of thought in his mind and discovered a new link among them, which we call the law of gravitation.”

No genuine pedagogical process — offline, online or hybrid — could really achieve its objective without requisite emphasis on how every individual could unearth the treasure within. One has personally observed in schools, colleges and universities how the golden words and views of Swami Vivekananda enhance their self-confidence and infuse an instantaneous keenness to know more about him. The Swami has expectations both from the taught and the teacher: Purity and a real thirst for knowledge, as also perseverance which qualifies the taught to proceed to unearth the perfection within. Similarly, the teacher must know: “No one was ever really taught by another. Everyone has to teach himself. The external teacher offers only the suggestion which rouses the internal teacher to work to understand things. Then things will be made clearer to us by our own power of perception and thought, we shall realise them in our own souls.” As one recalls the 1996 UNESCO Report on the shape of education in 21st century, popularly known as Delores Commission Report, the philosophy of education given by Swami Vivekananda finds mention in its title: “Learning: The Treasure Within!” In these times of growing emphasis on innovations and entrepreneurship, critical thinking and analytical skills could be acquired in educational institutions only when the teacher and the taught reorient their pedagogical strategies to fit in Swamiji’s eternal parameters. He repeatedly emphasised that mere acquisition of information is no education. Real education is “life-building, man-making, character-making, assimilation of ideas”.

Education forms character, enhances the strength of mind, expands the intellect and prepares one to stand on his own feet. It has universal acceptability; the only issue is how to implement it in its true spirit. The National Education Policy (NEP-2020) recognises the need to promote learners’ holistic development: “The policy’s vision is to instil among learners a deep-rooted pride in being Indian, not only in thought but also in spirit, intellect and deeds, as well as to develop knowledge, skills, values and dispositions that support responsible commitment to human rights, sustainable development and living and global well-being thereby reflecting a truly global citizen.”

The way out of the prevailing moral crises, besides countering the erosion in moral, ethical and humanistic values, is to refocus learning process on character formation, value inculcation and internalisation. That alone could pave the way for that much sought-after goal of global peace and harmony, reduction in violence and disproportionate investments in preparation for wars. Education systems must realise that most of the concerns facing humanity today, like climate change and depletion of biological resources, are created by humans. This could be halted only by men and women of competence, commitment and character to connect to humanity, cutting across all man-made boundaries. India has a great opportunity to lead in this direction; it has the experience, knowledge, wisdom and skills to proceed ahead. Swamiji’s own comprehension of history and historical forces was so deep that he could predict “India would be free within 50 years in unforeseen circumstances”. Further, he had correctly predicted the first Proletariat Revolution would take place in Russia. Regarding India, his prediction was that it would “someday rise to great heights of prosperity and power, far more than she has done in past”. This, too, would materialise.

There are prominent indications in what he said in the final session of World Parliament of Religions: “The seed is put in the ground and earth, air and water are placed around it. Does the seed become earth, air or water? No, it becomes a plant.” He continued: “Similar is the case with religion. The Christian is not to become a Hindu or Buddhist, nor a Hindu or Buddhist is to become a Christian. But each must assimilate the spirit of others and yet preserve his own individuality.” This must become the universal objective of all religions and humanity.