Final line-up of the CM faces in Punjab

Final line-up of the CM faces in Punjab 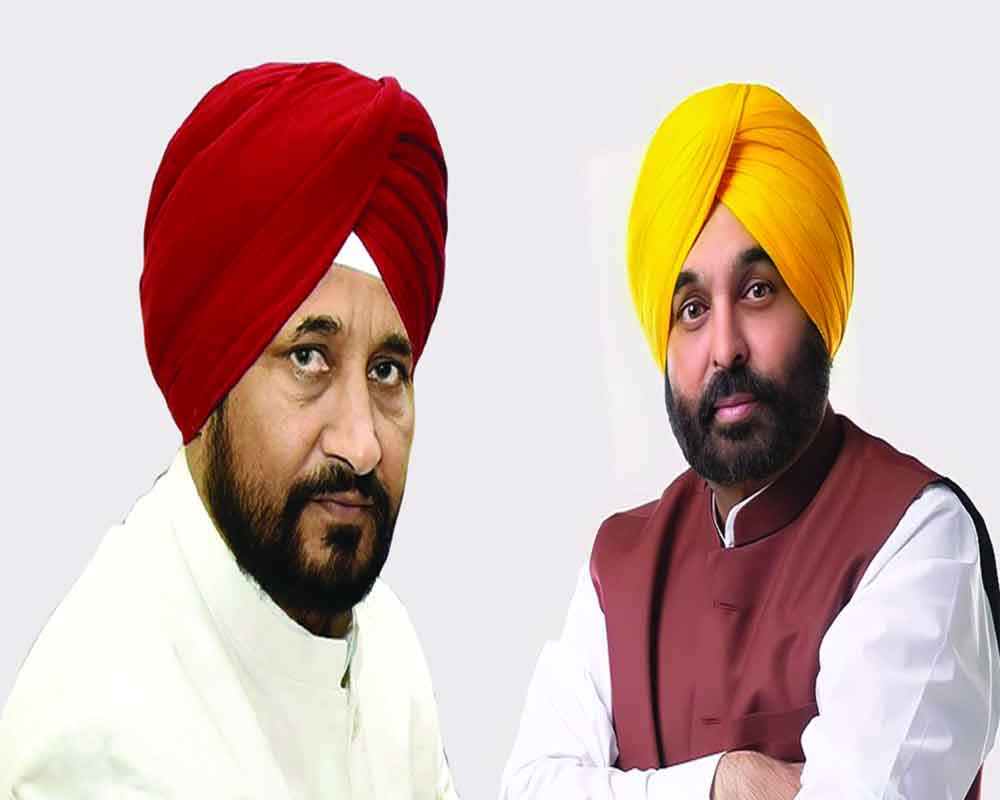 Charanjit Channi, Bhagwant Mann, Sukhbir Badal and Capt Amarinder Singh: It is now almost certain that there would be no parachute candidate in Punjab

With the Aam Aadmi Party (AAP) naming comedian-turned-politician Bhagwant Mann as its chief ministerial candidate, the long-drawn suspense within the party and outside has ended and brought in a sense of closure for the swelling party cadres who are fighting with their tails up in the forthcoming Assembly polls.

As far as the chief ministerial faces of the rival parties are concerned, Congress so far seems to be indicating that it will settle for Charanjit Singh Channi, who made a mark for himself in his short tenure after being sworn in Chief Minister following the unceremonious ouster of long-serving Amarinder Singh.

Then comes the third serious angle in the Punjab polls-Shiromani Akali Dal where leadership has now become hereditary and has passed on to party President Sukhbir Singh Badal. His father, Parkash Singh Badal, five-time chief minister, is now in his 90s and despite his public appearances now and then in the last five years, has clearly paved the way for his son, who also served as Deputy Chief Minister and Home Minister when the party was in power in alliance with the BJP from 2012 to 2017. SAD is in alliance with the Bahujan Samaj Party this time after breaking its over two-decade-old alliance with BJP on the controversial farm laws. BSP has already been offered the post of Deputy Chief Minister if the alliance is voted to power.

The Patiala royal Amarinder Singh would obviously be the chief ministerial candidate of the Punjab Lok Congress-BJP alliance even though his new party would get a lesser number of seats than BJP in the seat-sharing pact. Of course, the alliance has hardly got much effect on the ground given that it has no traction in the rural areas. In urban pockets, BJP has some influence but overall, political analysts are almost certain that it will not cross into double figures. They have obviously written off the alliance as a serious contender for power despite some aggressive inductions from left, right and centre in recent days. They see the Patiala royal parting ways with Congress and deciding to fight elections more as an “ego trip of a dethroned emperor” rather than a serious attempt at political resurrection.

As of now, it seems that the strategy of AAP in naming Mann, the popular face of the party after a tele-voting campaign, has helped get it traction with the voters. Publicizing a phone number for tele-voting, asking voters to give missed calls, SMS and WhatsApp, helped the party connect with the voters. All of this had an element of surprise and political freshness. This was obviously a new exercise of its kind and such novelty helps the party catch the imagination of the voters. Remember the days of the “Chai pe charcha” campaign of Prime Minister Narendra Modi in 2014 Lok Sabha polls and the “Coffee with Captain” campaign of Amarinder Singh in 2017 assembly poll which catapulted both of them to power. Of course, the man behind those popular slogans-Prashant Kishor-is now on a sabbatical, not coining any new slogan for anyone after West Bengal where Mamata Banerjee emerged victorious.

The “AAP da CM” tele-voting exercise saw over 21 Lakh people expressing their opinion on the number released by AAP on January 13 for voting, and 93.3 percent voted for Bhagwant Mann as their choice to be Punjab’s CM. Of course, there is many a slip between the cup and the lip and this is true in politics more than anything else, it is now certain that there would be no parachute candidate in Punjab now, as was believed by almost all the other political parties. In the last Assembly polls in 2017, when AAP did reasonably well, getting the Leader of Opposition space by piping out the Akali Dal, it had not declared a CM face and obviously did not want to repeat the mistake in 2022.

On the other hand, ruling Congress has so far not made any official announcement though in 2017 it had named Amarinder Singh as the CM face of the party days before the polls. As public campaign is not allowed and no big rallies are being held due to Election Commission’s Covid-19 guidelines, top leadership of Congress (read Rahul and Priyanka Gandhi) have not yet had the opportunity to go on stage with Channi or Sidhu so that any guesses could be made.

However, Congress, on its Twitter handle, indicated that Channi could be the candidate as it shared a video clip in which Bollywood actor-cum-philanthropist Sonu Sood is seen saying that people want a person from humble origins as the Chief Minister, indicating Channi.  In the video, there are visuals of the incumbent Chief Minister, fuelling speculation that the high command has sort of endorsed the name.  It is understood that Channi’s logical and emotional stand on the recent controversy over Prime Minister Narendra Modi’s security lapse in Ferozepur seems to have helped his cause. In addition, he has in a calculated manner cultivated the image of the ‘aamaadmi’ (common man) who has no pretensions to cut into the votes of the AAP.

The Congress high command knows it well that PCC chief Navjot Sidhu is not the one to accept anyone’s name as the CM face except his own without any protest. So, it is perhaps buying peace as of now by not making any official announcement. “Collective leadership” is the term coined to keep everyone happy till the crunch time comes.  Sidhu has been urging the high command to name the CM face, going to the extent of saying, “dulhe bin baraat kaisi” (What is a wedding procession without a groom). Obviously, he was referring to the wedding procession as an election campaign and groom as the chief ministerial candidate. But given the compulsions of the top leadership in keeping everyone happy, it seems, there would be no “groom” in the “wedding procession” as of now from Congress and all it would do is keep indicating and suggesting Channi’s name, without doing so.

Surprisingly, in the tele-voting campaign of the AAP, Sidhu was the second most-preferred CM candidate of the party getting a little over three percent of the votes. Many in Punjab had two interpretations or questions on this, one whether Sidhu would move to AAP and two, what kind of methodology AAP adopted in tele-voting where Sidhu too figured. But political speculations apart, as of now, Sidhu seems to be a few steps behind Channi as the CM face of the party in the eyes of party cadres as well as the central leadership.

So, the name of the captains of the respective teams as of now are out-Bhagwant Mann, Charanjit Singh Channi, Sukhbir Singh Badal and Amarinder Singh. The results will flick the coin.

(The writer is Senior Resident Editor, The Pioneer, Chandigarh. The views expressed are personal.)