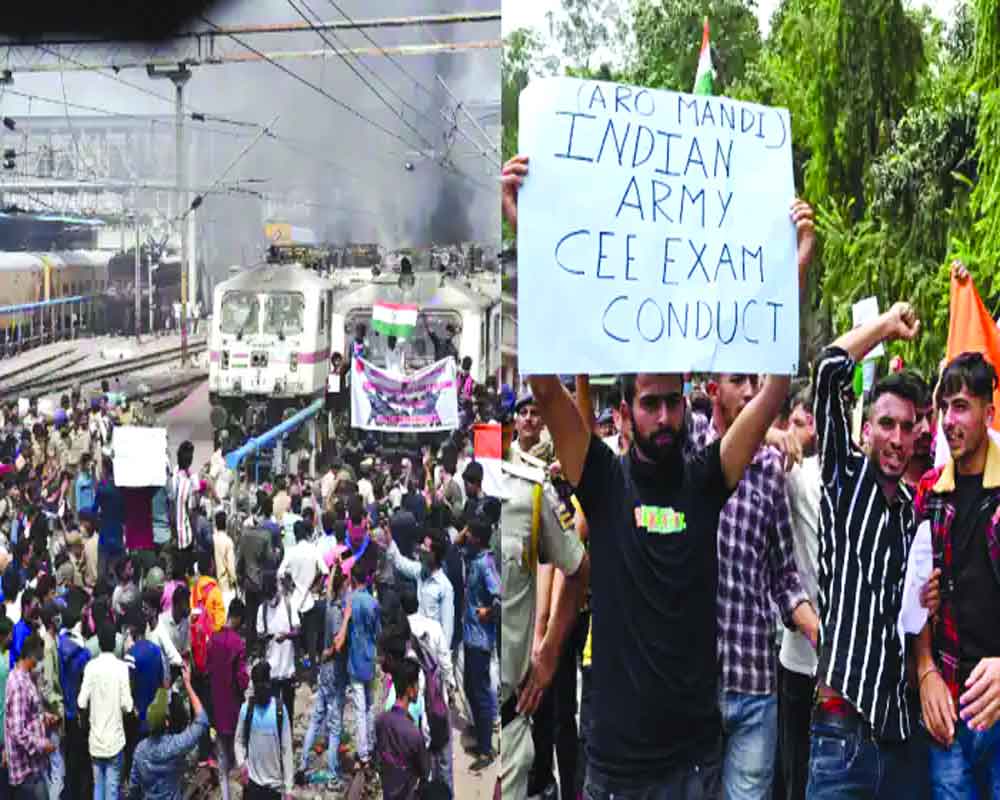 A major, if not the main, factor contributing to the agitation against the Agnipath scheme is massive unemployment all around, especially at the low-skill levels. One need not be an economist to know that. The Narendra Modi Government and its supporters may try to heap the entire blame on the COVID pandemic, but the truth is that the situation was pretty bad even before the novel Coronavirus hit India. According to the data that the Labour Ministry released in May 2019, the unemployment rate in the country was 6.1 per cent in 2017-18, the highest in 45 years. While 7.8 per cent of all employable urban youth were without a job, the unemployment rate was 5.3 per cent in villages. The pandemic worsened the situation, especially for those at the bottom of the pyramid. Thankfully, some improvement has been recorded. The quarterly periodic labour force survey that the Ministry of Statistics & Programme Implementation released last week showed that the unemployment rate in urban India in the January-March quarter of this fiscal fell for the fourth consecutive quarter. From 8.7 per cent in the October-December quarter, it came down to 8.2 per cent. In the July-September quarter, it was 9.8 per cent and in the April-June quarter, 12.6 per cent. The decline was sequential and sustained over the entire fiscal. Non-governmental sources seem to corroborate the official claim regarding the declining trend, if not numbers.

The Centre for Monitoring Indian Economy, whose data and analysis are often seen as critical of the Government, said in the first week of April that the overall unemployment rate came down from 8.1 per cent in February 2022 to 7.6 per cent in March. The Ficci quarterly survey of manufacturing also hints at buoyancy in the job market. “There seems to be an improvement in employment creation by the sector as compared to the previous quarter (Q-3 of 2021-22), where only 25 per cent of the respondents were looking at hiring in next few months. This percentage has improved significantly to 53 per cent of the respondents in Q-1 2022-23 who are now looking at hiring additional workforce in the next three months,” the survey, which was released on Monday, said. But the magnitude of the unemployment crisis is so huge that the improvements recorded appear to be too inconsequential to make a big dent to it. Unsurprisingly, a Government job — with the security of tenure, the social security benefits, etc — seems like a boon. Concomitantly, its removal, or perception of removal, looks nothing but betrayal; it becomes more painful when there is an acute paucity of jobs elsewhere. This pain is getting manifested in the stir, which has become violent in many places, against the Agnipath scheme. While short-term measures are needed to end the agitation, medium- and long-term steps are also required to address the longstanding issue of unemployment. The nation can ill afford stirs at the time of economic recovery.