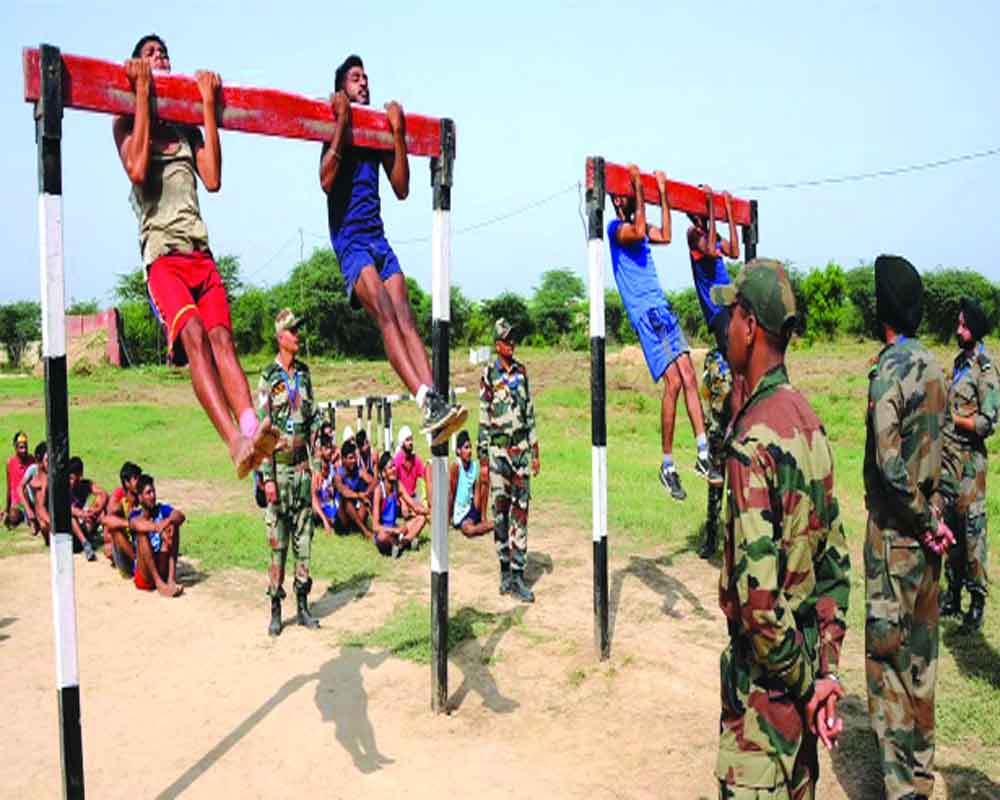 A nationalist Government that treats national security as a sacred patriotic duty has surprisingly pulled the brakes and taken a laid-back position on two critical Defence matters: Recruitment of Personnel Below Officer Rank (PBOR) and appointment of the Chief of Defence Staff (CDS).

Much has been written about the mysterious silence over the CDS, very little on the freeze in recruitment. I have met several senior serving officers, including one last week, and quizzed them over the Government’s 26-month blanket ban on recruitment. When queried, the Brigade Commander winced and said: “Sir, this is an extremely serious matter and its deleterious effects have already undermined our operational capabilities.” The matter has been raised in Parliament but everyone is strangely sanguine, even nonchalant. The high-profile Brigadier said: “It seems the Government has lost interest in Defence.”

After milking the armed forces through cross-border strikes — the Uri surgical raids, Balakot airstrikes or hot pursuit in Myanmar against dissident Naga groups, that yielded enormous electoral dividends — the Government has gone kind of numb and begun fumbling on key issues. Late CDS Gen Rawat would not have let recruitment stop for so long at a time when Chinese PLA is breathing down the neck of our troops across multiple un-vacated intrusion points. Nothing explains the suspension of soldier recruitment in combat and combat-support arms.

The Brigadier pointed to infantry battalions being on an average 150-200 soldiers short of their fighting strength. When elections could be held, religious festivals, melas and yatras organised and crowds requisitioned for political rallies, why COVID had blocked recruitment rallies, he asked.

This Government, and Prime Minister Narendra Modi in particular, had placed soldiering on the highest pedestal, unless it was just lip-service and showmanship. The result is that unemployed youth wanting to become warriors are in despair. Social media is full of stories about soldier aspirants who have turned overage having begun peacefully protesting over missed opportunities. The anecdotes about lads running miles to join the Army have a bad ending.

Many local academies in Rajasthan, Madhya Pradesh and Haryana, which were coaching potential candidates for the Fauj, are running out of work. This is the first time that a moratorium on recruitment has been promulgated in the country at a time when we are celebrating 75 years of Azadi Ka Amrit Mahotsav.

No- recruitment echoes are reverberating in neighbouring Nepal, which provides Gorkhas for Indian Army’s 40 Gorkha battalions. Recruitment rallies have not been held in the famed Gorakhpur Gorkha recruitment depots. Wannabe Gorkhas are pasting fake posters about recruitment to uplift their morale. Is it possible that despite most COVID restrictions being lifted and the third wave suitably under control, the recruitment ban has not been lifted as it may be linked to the preposterous idea of 3/5 Tour of Duty proposal? Or is it simply revenue saving through reduced salary and pension bills?

The thinking Brigadier suggested that ToD should not be dismissed out of hand. It should be test-bedded in one or two units just as the proposal of pure single-class regiments being turned into all-India class was experimented. Another officer from his Brigade said the Army had oversanitised itself during COVID, rejecting requests by civilians for assistance as it was a great moment to reach out to people “but we were cocooned in our cantonments”. The Army should have been requisitioned to help migrants return to their villages. The military could have helped in many other ways as value add-on.

The current mess in Defence is partly due to the absence of CDS. But the cat is out of the bag. After six months of suspense, MoD officials are leaking information to justify delay in naming CDS that some of us in the strategic community had predicted — that the Government is rethinking the charter of CDS, in particular, remit of the Department of Military Affairs which has deprived the Defence Secretary and his bureaucrats of the control they exercised over the military. By transferring several sections/ departments that the Defence Secretary controlled to DMA, the civilian officials were marginalised. The CDS became super powerful: Single point of advice to Defence Minister, Permanent Chairman Chiefs of Staff Committee, Secretary DMA (which is demotion for CDS as he is several notches above Secretary to GoI in Warrant of Precedence) advisor to Nuclear Command Group, final arbiter in prioritisation of Defence acquisitions and operational head of Theatre Commands. Although CDS is primus inter pares among service chiefs, his charter of work makes him mightier than the colonial era C-in-C who was at loggerheads with the Governor General.

When Rawat was hurriedly appointed CDS on December 31, 2019, his charter of duties was worked out by CoSC and the innovative DMA approved by NSA Ajit Doval who heads the Defence Planning Committee and de facto is the security supremo. The appointment of Lt Gen (retired) VG Khandare as first-ever military advisor to Defence Secretary who had an earlier stint as military advisor to NSA is probably the spark that ignited the rift between Defence Secretary and CDS/DMA. The Defence services will likely revert to absolute control of civilian bureaucracy in MoD with or without CDS. Long live Atmanirbharta!