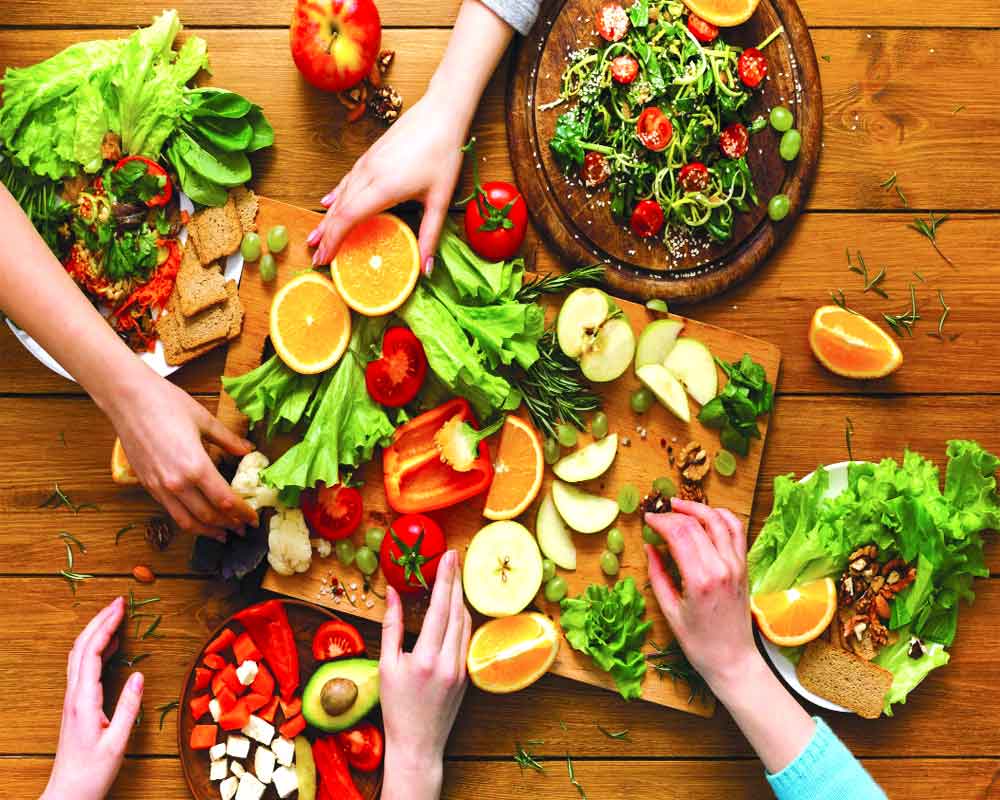 Nature designed humans to be vegetarian. It is healthier and environment friendly to switch to vegetarianism

Humans eating animal meat began in the miasma of time, when man had not learned how to grow the grain, vegetable, or fruit he desired. In short, when he knew no agriculture at all. Yet, in many places animals might have lived nearby and therefore, easy to catch and kill. To make his food tastier, and easily accessible, he took to meat-eating. I say, man, because it is my impression that women crave less meat than men. This is so in India and impressions gathered in Europe. This could be due to traditions that began with a man going out to hunt while the woman stayed at home.

There is no doubt that nature meant humans to be vegetarian; or else, their teeth would not be flat, unlike those of the carnivores, which have long, canine teeth, which are very helpful in tearing into the flesh of other animals. The elephant, rhinoceros, cow, horse, and buffalo all have flat teeth and have remained vegetarian, unlike many a human. It was not a question of nutrition, protein, or muscle. The vegetarian animals named above all live off the grass, leaves, and other non-meat fare. Yet, they are all strong, muscular, and healthy to the extent desired. The explanation probably would be that the digestive system of the natural vegetarian would find protein or some similar nutrient that provides the elephant and the rhino with the strength and muscle that it has. This phenomenon is demonstrated in the human world as well, where there are champion wrestlers, who are vegetarians, as well as other sportsmen and sportswomen. Yet, it is a popular belief that meat-eaters are naturally stronger and more muscular than their vegetarian counterparts. The argument is that the protein from meat is more really transferred to the human body than from the lentil or dal.

In my view, the cruelest side of meat-eating can be imagined if one were to imagine or realize that someone has killed his/her child merely to eat its meat. This argument of mine has been countered once or twice, by posing a counter-argument that the modern way of delivering meat is to produce it from a piggery; pigs are bred, fattened, and then slaughtered for delivery to the market. My reaction has been that life is a life, no matter how it is born and bred. From the point of view of food, it must be remembered that the animal, before being slaughtered, consumes 900 kilos of vegetation and grains before delivering a hundred kilograms of meat. These figures are merely to illustrate that the ratio of meat and grain is 9:1. Fearing a possible food shortage next year, the Indian government has prohibited any export of wheat.

The caution stems from the egregious climate change, causing unpredictable changes in the sequence of seasons. In some areas of the globe, there have been flash floods, with cities and their surroundings suffering floods. There have been widespread droughts in other regions of the world. Both the phenomena, flood, and drought will be a hindrance to normal food production. This makes avoiding meat-eating vital. One either saves nine kilos of wheat by avoiding meat or consumes a disproportionately large quantity of food grain for obtaining only a kilo of meat. By voluntarily opting for a vegetarian diet instead of a palate of animal meat, human beings can drastically reduce the amount of land, water, and oil they consume and the amount of population they cause to the planet. Most estimates tell us that a vegetarian diet means 2.5 times fewer carbon emissions than a meat diet. Other examples too, serve as illustrations of this fact. By eating vegetarian food for a year, we can save roughly the same amount of emissions as a family keeping a small car off the road for six months can.

The world's population is set to rise above 9 billion by the year 2050. A meat-eating life undeniably means that we are gobbling up the earth's resources faster than we can replenish them. At our current rate of consumption, which certainly includes non-vegetarian food, we shall need three planets to be able to sustain our current levels of living. Where will we find them?

For a Hindu, his/her universe includes all living beings. To kill an animal is murder, big or small. To do so, merely to enjoy a sumptuous meal, is considered heinous. The resulting bhagya (fate) of such a karma would be drastic. The average individual does not think things out. The crime, therefore, is beyond the average person's imagination.

In the Hindu ethos, the soul is an entity that keeps transmigrating from one living being to another through an endless cycle of birth, death, and rebirth. This is the reason a Hindu is not easily driven to kill another being, even birds and animals. Hinduism is arguably the only way of life that worships animals and plants. Western faiths which were born in the desert with lesser vegetarianism have lesser regard for animal life. But even the Western world is gradually realizing the karmic interconnectedness. Globally too, the realization is growing that genuine peace and a cessation of human conflict are not possible without compassion for all living beings. Turning to a vegetarian way of life is the simplest yet most effective way of achieving this goal.