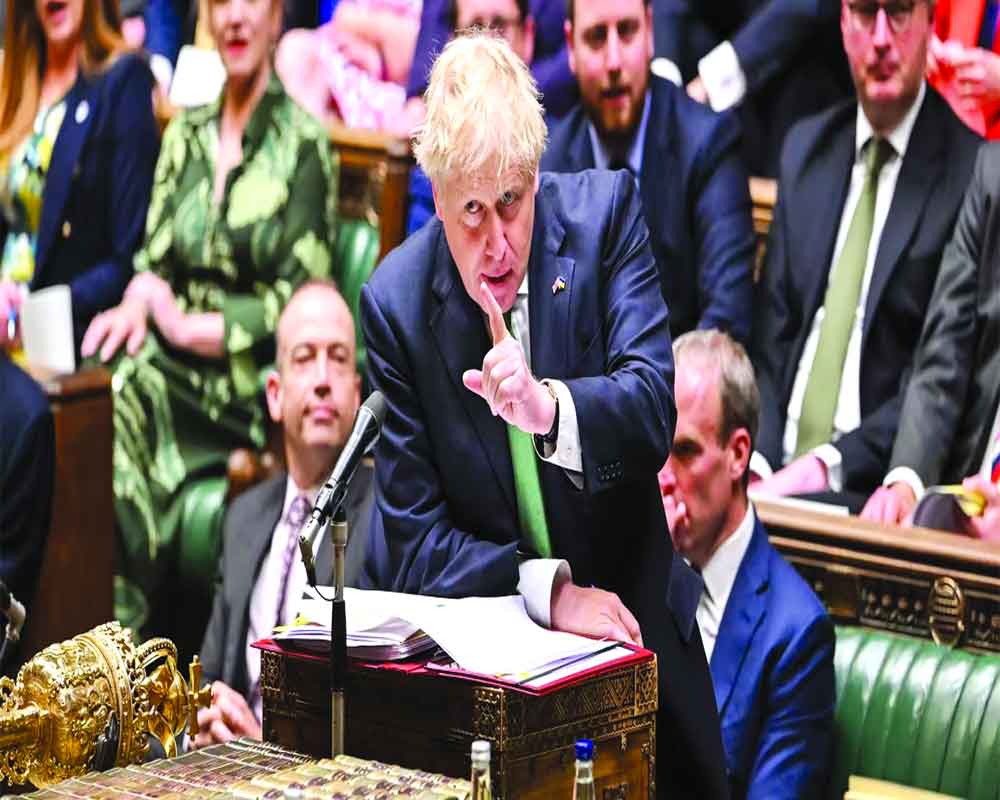 The British democracy shows maturity in the testing times while we in India are still amateurish in our approach.

Boris Johnson’s confessed hero, Winston Churchill, once said, a lie gets halfway around the world before the truth has a chance to get its pants on, and it worked well with the blustering buffoonish act of Boris, till the sheer quantum of lies in the age-of-rage imploded the ‘BoJo’ party! Knives didn’t come out from the Labour benches, but in a typically British

way of democracy as Churchill had forewarned, ‘The opposition occupies the benches in front of you, but the enemy sits behind you. BoJo was ousted by his party colleagues. Britain will soon have its fourth Prime Minister in a row, from the same political party i.e., Conservatives in power since 2010! Unlike India, where leadership cults ensure that the electorate elects ‘leaders’ (who outsize parties), in more mature democracies like Britain, the electorate elect parties. In 2016, after six years of continued Prime Ministership (including winning the first Conservative majority since 1992), David Cameron left 10 Downing Street owning to the non-legally binding result of Brexit at the age of 49 – his famous last words at retiring from active politics, ‘I was once the future! Cameron’s successor and Brexit position rival, Theresa May, soon took over.

There was no overt bitterness between the two and certainly no manipulation of intra-party intrigues by the outgoing Cameron – the Conservatives stayed put, and the intra-party rivals moved on. Soon the hot potato of Brexit proved too much for Theresa May too, as she found herself facing no-confidence motions from her party colleagues. By May 2019, May announced, ‘it is now clear to me that it is in the best interests of the country for a new Prime Minister to lead that effort, and in a move that may seem shocking in the Indian context, May relegated herself to the role of a ‘backbench’ MP to ‘devote her full time to her constituency of Maidenhead. May paved the way for her party’s Brexit rival, the posh Etonian with laddish charms, Boris Johnson. But for occasional disagreements with the BoJo government on matters of conscience and principles, May faded out gently with no rancor, bad blood, or political ambition to unseat BoJo. For all its fallibilities, the culture of internal democracy is still alive and kicking in British politics. There are no such parallel instances of internal political ‘confidence votes’ or gracious acceptance of the end of the individual political journey, in the Indian context – our political leaders are superhumanly deified, they remain infallible and essentially, forever.

Whenever political parties implode (as they did recently with the BoJo dispensation), there is no talk of the creation of a new party by disgruntled elements, no sheepherding of Parliamentarians in a resort or anti-defection clauses. The party (in this case, Conservatives) is visibly over and above the individuals who lead the same, and the DNA of internal democracy ensures the criticality of accountability and responsibility, on all leaders – no one is beyond questioning.

The same seamless shift in leadership took place in the opposition Labour ranks with the exit of Jeremy Corbyn and the subsequent ascendancy of a rival from within, Keir Starmer. Idle talk of ‘disciplined/loyal soldier of the party’ or vacuous concepts like ‘high-command’, simply does not exist. Boris Johnson’s resignation speech said it all, ‘the herd is powerful and when the herd moves, it moves and my friends in politics no one is remotely indispensable, and our brilliant and Darwinian system will produce another leader equally committed to taking this country forward, and so the political curtains come down on the once-indefatigable, BoJo, at just 58!

Now, in what might seem like a dangerously divided house to the Indian political sensibilities, there are over ten serious contenders to Conservative leadership, and none of them pertain to the previous leaders like May and Cameron. The diversity of their individual positions on issues like Brexit, tax and spending, culture wars, NHS, etc., is staggeringly different. No wild attributions of unnecessary extremities like ‘anti-national’ are at play.

Even for a traditionalist party like the Conservatives, the contender&#39;s list is composed of diversities of ethnicities, religions, and colors that truly depict the multiculturality of Britain, which was once prided by democracies like ours and was starkly missing in democracies like

Britain. Times have changed. In such moments of precarious health and uncertainty within the Conservative ranks, the principal opposition party i.e., Labour, is only making perfunctory noises of ‘Labour is ready for government’, but unlike our instinct of political machinations and manipulations, no efforts to ‘win’ over elected members towards their ranks, is initiated. British citizenry will simply not accept such selfish ‘ratting’ of individuals, owing to the change of political fortunes for political parties.

The ensuing British political drama is also a lesson in the limits of populism and verbiage that is directed solely at the ‘past’ and ‘others’, as the restless British citizenry demands hard results and promised transformation. The distraction of real issues, as perfected by the gift of the gab leaders like Boris Johnson was exposed by his party and the people, and not so much by the opposition ranks. India shares so much in common with Britain with its Westminster style of democracy, and yet, so much difference.

(The author is former Lt Governor of Andaman & Nicobar Island and   Puducherry. The views expressed are personal.)