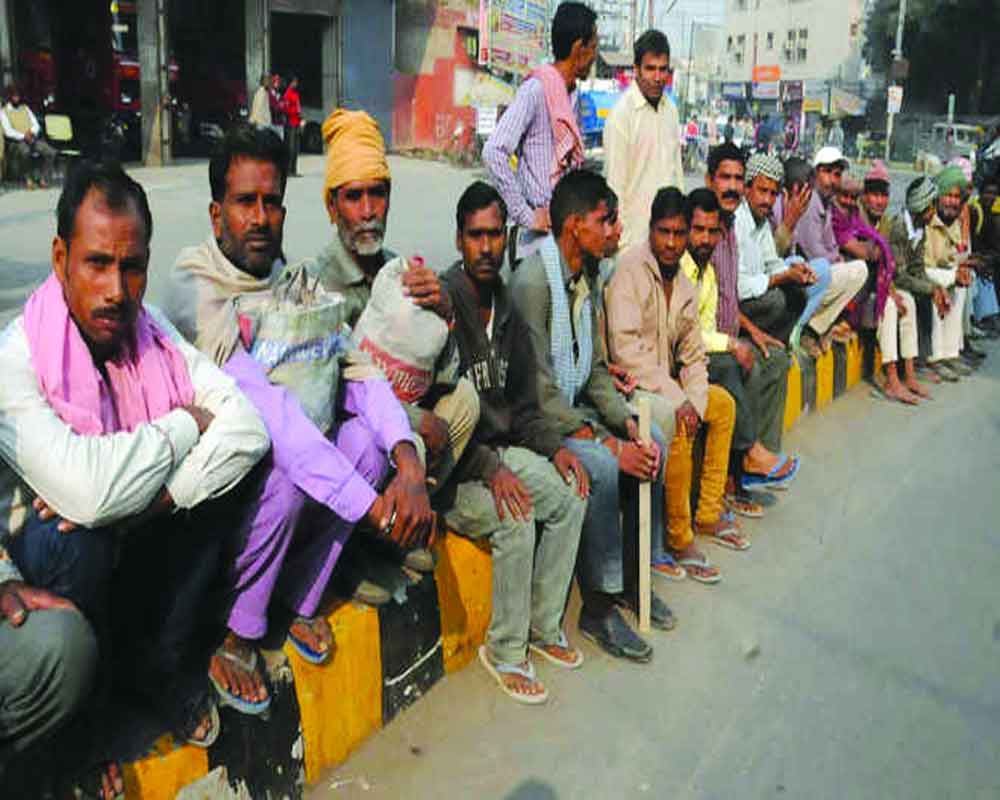 MGNREGA job demand was less in 2021-22, meaning people who migrated to villages after COVID got their jobs back in urban areas

The CMIE concludes that though the decrease in employment has been nearly 7 million i.e. 70 lakh, the increase of unemployment is only 4 lakh, indicating that the people who got unemployed during this period have given up hope of employment and they are now out of the race for employment.

It’s notable that for some time, due to some reasons, the employment related data in the country is not being published by the National Sample Survey Organization (NSSO). It is natural that in the absence of official figures, the figures of institutions like CMIE get space in the media. However, their credibility is questionable.

This logically means that if unemployment rises, the demand for MNREGA will also increase. For example, in 2020-21 due to lockdown in cities and decline in economic activities, employment decreased and people migrated to villages, then in those days the number of ‘MGNREGA’ beneficiaries increased to 7 crores from merely 5 crores before the

Interestingly, the period (2021-22) for which the CMIE report is talking about a rise in unemployment, demand for MGNREGA employment was actually 6.55 percent less than the previous year. That is, it can be said that during the Corona period, people who had migrated to the villages had got employment back in the urban areas. In this sequence, if we look at the figures of April 2022, it is found that in April 2021, 2.62 crore people had sought work under ‘MNREGA’, whereas in April 2022, only 2.33 crore people sought work under MGNREGA, that is, a decline of 11.15 percent. Analysts believe that the fall in demand for employment under MGNREGA is due to increased employment in urban areas. This figure is in stark contrast to the report published by CMIE, which says that people have moved out of the labour force, giving up the hope of employment due to the loss of employment opportunities. Instead of giving its own value judgement about unemployment, CMIE should have taken note of the MGNREGA figures to arrive at a conclusion.

The CMIE report states that even if 7.5 percent GDP growth is achieved in 2022-23, the unemployment rate will increase rather than going down. For this they talk of employment elasticity with respect to GDP. But we have to understand that the recovery after Covid in the economy is not a normal recovery. This recovery accompanies some fundamental changes in the Indian economy. All indicators of the economy are pointing towards these changes.

Significantly, in the last quarter of the last financial year (2021-22), the monthly average of GST collection was 1.42 lakh crore. The unprecedented GST collection of Rs 1.68 lakh crore in the first month of this financial year (April 2022), is definitely pointing towards an upsurge in the economy. In March 2022, 7.7 crore e-way bills were generated, 13 per cent more than 6.8 crore e-way bills generated in February 2022. This clearly shows a sharp recovery in the economy.

Significantly, due to the shortage of semiconductors in the country, many of our industries including automobile, electronics, telecom have been affected. Despite that, rising GST revenue is indicating an uptick in manufacturing in the economy. It is true that imports have also increased during this period, due to which the revenue of GST has increased, but where the revenue of GST has reached Rs 1.68 lakh crore, the share of import GST in this revenue is Rs 36705 crore, which is greater than import GST of March 2021 by 5608 crores only. It’s notable that import GST in March 2021 was Rs 31097 crore. This implies that domestic businesses have definitely grown during this period, resulting into this huge increase in GST.

The Government should soon publish robust official NSSO data and present the correct picture of employment in the country.