Netaji arrives in Delhi, & in style

Netaji arrives in Delhi, & in style 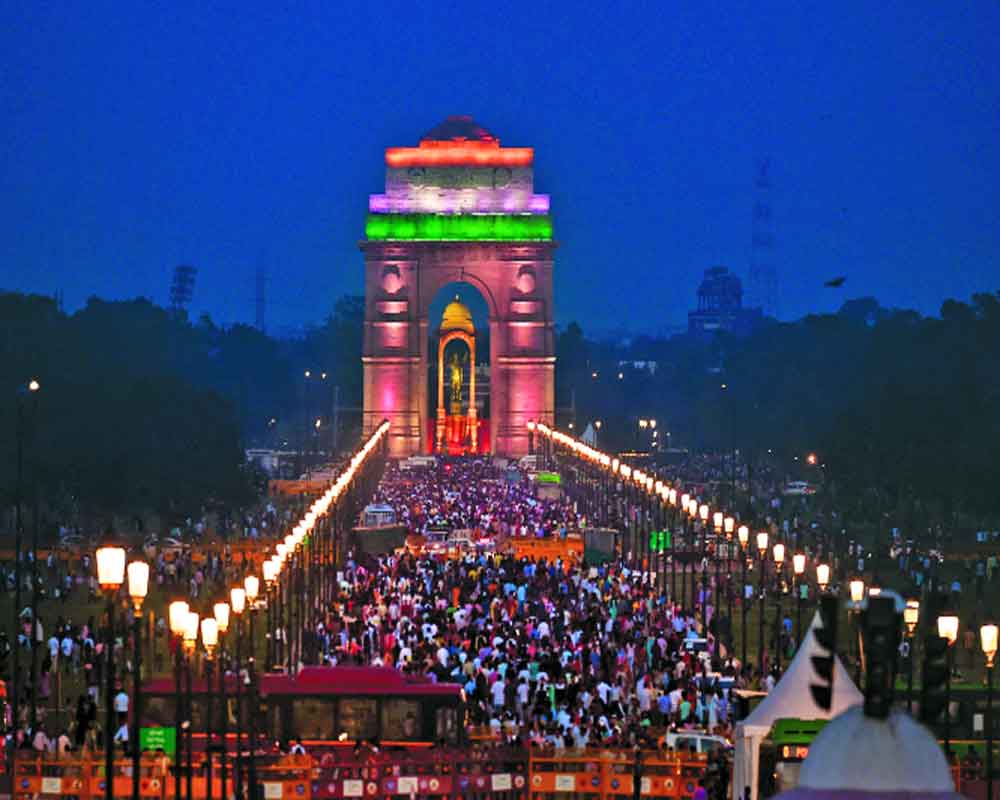 Netaji Subhas Chandra Bose has a special place in the freedom struggle. His imprint on free India is written in the indelible ink of honour and valour

Prime Minister Narendra Modi unveiled the 30 feet tall black granite statue of Netaji Subhas Chandra Bose placed under the canopy of India Gate in Delhi. The grand pathway now has its new identity as Kartavya Path. The earlier Rajpath, a Hindi translation of Kingsway, reminiscent of the Raj, is now history. This is aptly so. The credit for forcing imperial Britain to read the writing on the wall and quit India must go to Netaji Subhas. Prime Minister Modi's decision to consecrate the canopy of India Gate to mark "AzadiKa Amrita Mahotsav", commemorating 75 years of independence as well as Bose's 125th birth anniversary, is a befitting tribute to the legendary warrior who embraced the path of armed struggle to free the nation.

Without the firm moorings of a healthy society and a free and strong nation, individual greatness is worth a zero. Two Indians from the same province learned this blunt truth of international geopolitics in their way. Rabindranath Tagore in 1913 was to deliver his lecture on human philosophy at Japan's Tokyo University to his dismay and the embarrassment of his hosts found that not a single student of Tokyo University turned up to listen to his words of wisdom. The entreaties of their alma mater's authorities were to no avail. "We refuse to listen to the views of an enslaved nation. What philosophy can such a country have?" The Japanese students only stated what an undeniable truth is-the defeated and enslaved, or colonized, have no business lecturing free and sovereign people on things like philosophy.

Justice P.B. Chakraborthy, Governor of West Bengal in the 1950s revealed in his 1956 meeting with (by then former Prime Minister of Britain) Clement Attlee, who had come to India and stayed in Kolkata as Chakraborthy's guest. Attlee was the man who as leader of the Labour Party and British Prime Minister between 1945 and 1951, signed off on the decision to grant Independence to India. He bluntly told Chakraborthy that it was Subhas' Indian National Army that had shaken Britain's confidence and that the impact of Gandhi's satyagraha, was-in Atlee's own rather sarcastic words-"m-i-n-i-m-a-l."

The British Library near Euston Station, London stores the 'India Office Records, which contain nearly everything that the British colonial rulers had with them in India and transported them back 'in toto' before Aug. 15th, 1947. Amongst these is a document by the then Commander in Chief in India-Field Marshall Sir Claude Auchinleck. It is a Memo to the then Viceroy Field Marshall Wavell. The purport of this extraordinary memorandum is that "…..Gandhi is not a problem. We can deal with him and handle him. Congress is also not a problem. We can easily deal with them. But now that India and Indians know about the INA as also as the mutinies in the Royal Indian Navy and the Royal Indian Air Force, the Indians know that we have lost the love of the Indian Armed Forces. It is time to leave India!" Gandhi's four movements in 24 years came to naught. Upon his prison in 1945, the country's political environment changed. Gandhi was now merely a Bapu, with Nehru and Sardar Patel at the helm. Had he not been assassinated, he might have lost his greatness in his lifetime.

Bose's radical agenda did not suit Gandhi who opposed him for seeking re-election as president of the Congress in 1939. Gandhi's candidate, DrPattabhiSitaramayya, was defeated. The Mahatma could not stomach his candidate's defeat. In his book, The Springing Tiger, historian Hugh Toye has written: that Bose's popular mandate as President of the Congress in 1939 was denied by intrigue, not only against him but against the very democracy that had elected him.

Bose's INA was living proof that soldiers who had sworn loyalty to the Crown could go back on their vow. Netaji shook the British confidence in the continuing loyalty of not only the defence forces but also the civilian machinery. The British fears were vindicated when Indian Navy sailors mutinied at Bombay in 1946. Subhas's action thus hit the Achilles' heel of the foreign rulers. After independence, Nehru feared that Bose might not have been killed in the reported air crash at Taipei on August 17, 1945, and could return to compete for power. Nehru made it his party's as well as government's policy to obliterate the legend of Netaji. Netaji's clarion call to the brave men and women who joined him was "Chalo Delhi" (March to Delhi). While he did not live to see the culmination of his mission, it is highly gratifying that this valorous son of India is finally coming to Delhi.