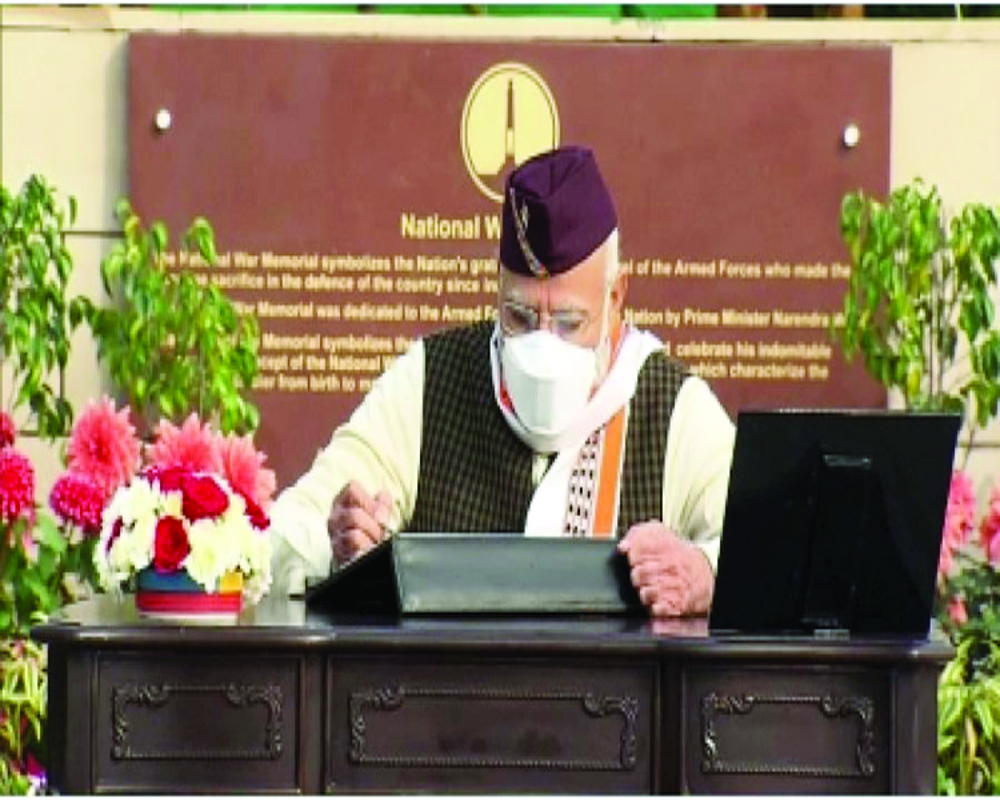 Deviating just a little from sporting his usual type of headgear this Republic Day, Prime Minister Narendra Modi chose to don a cap from Uttarakhand and stole from Manipur around his neck. Normally, as seen on previous R-Day and Independence Day celebrations, he prefers to opt for a bright, multi-coloured saafa or turban. On Modi’s cap was inscribed a ‘Brahmakamal’, which is interestingly the State flower of Uttarakhand. To be fair to him, though, the Prime Minister is apparently fond of the ‘Brahmakamal’ and uses the flower whenever he offers prayers at the Kedarnath temple. Similarly, the white, black and red woven stole that he draped around his neck is a leitmotif of the Meitei tribe in Manipur. Once again, his choice to wear these accessories may be seen as an attempt to cosy himself to voters in the two hilly States. No wonder, Uttarakhand Chief Minister Pushkar Singh Dhami immediately took to Twitter to point out that the PM wore the famous ‘Brahmakamal’ cap, different from the colourful turbans that he has worn during the previous R-Day celebrations.

For his part, Minister Biswajit Singh wrote: “Moment of great pride and honour for entire #Manipur on seeing Adarniya PM @NarendraModi Ji wearing a Manipuri stole, Leirum Phee, on the glorious occasion of 73rd Republic Day of India, showcasing the exquisite tradition of the state.” The Leirum Phee has been seen on the PM on many occasions in the past, especially during live addresses to the nation. The Prime Minister’s hint to both Uttarakhand and Manipur, besides three other States where elections have already been notified, was rather vigorous than subtle. Uttarakhand votes on February 14 and Manipur on February 27 and March 3. However, the jury is still debating whether, legally or not, it behoves someone of the stature of the Prime Minister to use a national festival to further his party’s agenda and send out a signal of endearment especially to the electorate in the poll-bound States. Continuing in the same vein, the choice of national heroes featured in the tableaux could have been more exhaustive. The grand parade depicted Netaji Subhas Chandra Bose and Sardar Vallabhbhai Patel, quite deservedly; still it skipped any chances of showcasing a glimpse of Mahatma Gandhi, BR Ambedkar and Jawaharlal Nehru, all of whom have also been tall national leaders. The nation’s moment of pride might just have been one more shade happier.