Playing with the nation’s heritage

Playing with the nation’s heritage 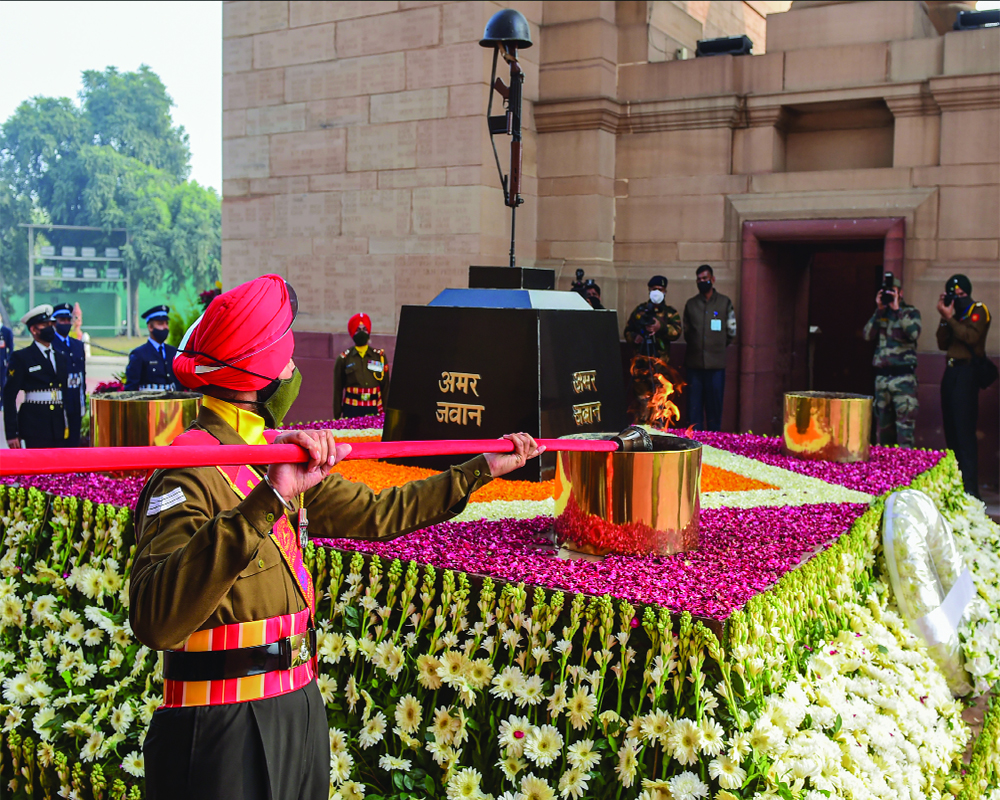 Never before perhaps a national memorial to soldiers has sparked such a major controversy as the decision to extinguish the 50-year-old eternal flame -Amar Jawan Jyoti - at India Gate or the installation of Netaji’s statue at a disputed canopy. Earlier, a proposal to install Mahatma Gandhi’s statue there was not considered befitting to his stature and abandoned. Then how can Netaji’s statue be be installed there? India Gate was a memorial for the 80,000 Indian soldiers killed in foreign wars. The Jyoti was lit at its arch in 1972 by the then prime minister Indira Gandhi to commemorate the victory against Pakistan in 1971, creation of Bangladesh and in tribute to the soldiers. The dispute has now been sparked by an apparent targeting of the Congress at the height of the elections to UP and four other states. West Bengal chief minister Mamata Banerjee is the other target whose Netaji tableau for Republic Day parade was rejected and BJP is alleged to be appropriating Netaji’s legacy. The Government says though the flame was lit in 1972, the names of 3,843 martyrs of the 1971 war were not inscribed. The National War Memorial next to India Gate is the first national monument, with whose flame the one at Amar  Jawan Jyoti has been merged. An unseemly situation is developing. Congress leader Rahul Gandhi slamming the government says that flames are for our soldiers and would be lit again. “This is insulting history and memory of the martyrs of Bangladesh war. It is shocking outrage”, says former Congress minister Anand Sharma. Union education minister Dharmendra Pradhan says it is an “unnecessary controversy” and the opposition lacks knowledge of history.

The Congress is accusing the present government of not giving due to leaders like Pandit Jawaharlal Nehru, Indira Gandhi and Rajiv Gandhi even as BJP appropriates freedom fighters like Vallabhbhai Patel, BR Ambedkar Patel and Netaji Subhash Chandra Bose. The people in Delhi feel that the Jyoti is historic and should have continued. Many Hindu shrines, including in Badarinath, have jyoti lit continuously for centuries. It is being echoed that now it is not the same jyoti at the NWM. The nation has to respect, honour and be proud of its heritage. Doing anything new is not a novelty. Let the nation think, consider, discuss and then do. The government says that dignitaries cannot pay tributes at two shrines. On the other hand, people wonder why suddenly the decision to install the Netaji statue was announced without a discussion.The statue of George V was removed from the canopy in 1968.  In 1991, former prime minister Chandra Shekhar wanted the canopy demolished and a Gandhi statue erected there. But since the canopy housed a colonial occupier, who was removed by Indian freedom fighters, a statue of an Indian leader was found inappropriate and insulting. So Gandhi was never given that place.

Netaji has been raised to an icon by RSS executive member Indresh Kumar who initiated an event in Andaman to celebrate Netaji freeing the island and setting up the first national Azad Hind government every December end. Most senior leaders feel Netaji should have an independent place and not a “tainted” one. But it is more than this. Narendra Modi wants to trounce Mamata Banerjee. In 2021, he tried by having the 125th birth anniversary celebrations on eve of Bengal elections at Kolkata’s Victorial Memorial, an incongruous British symbol. Mamata had stolen the show. Now the government wants to install the Netaji statue to spite her. Would that help BJP? Unseemly battles do not behove a great nation. But politics is at a new low.