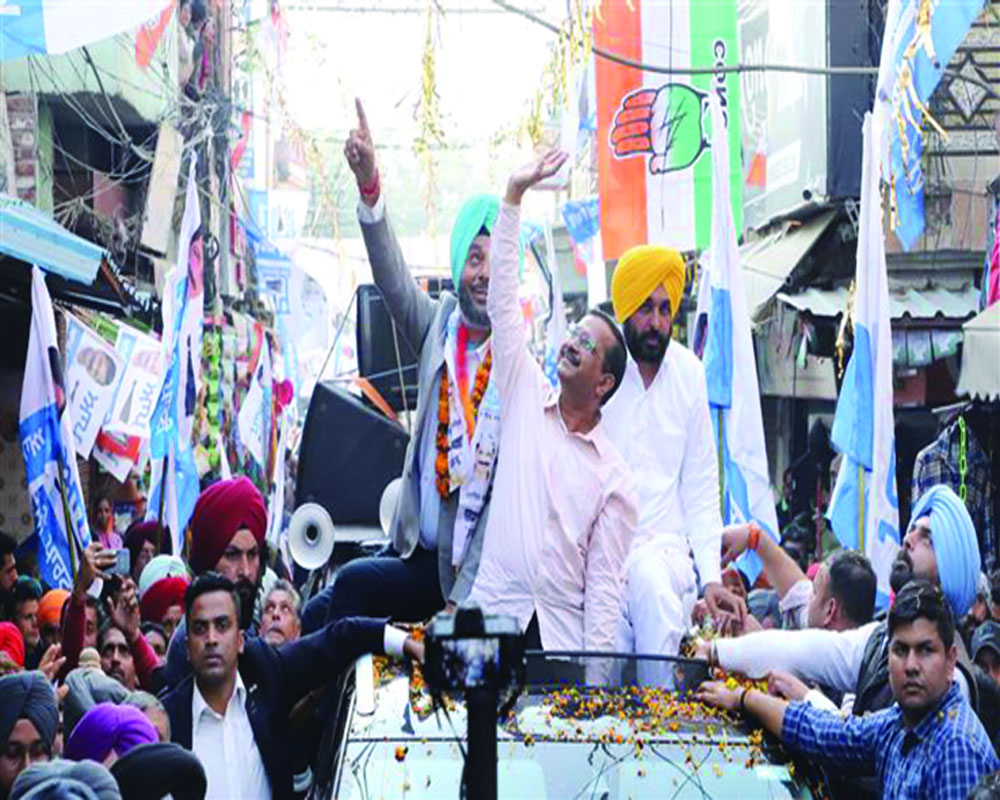 Assured of financial help to meet most of their basic needs ‘perpetually’, the freebies cult is changing the mindset of people and making them complacent

A few days back, Prime Minister Narendra Modi asked senior bureaucratsto point out deficiencies in government policies. In response, some officials have zeroed in on ‘the freebies promised by winning party in state elections’.

In the past, freebie - an acronym for “something given free of charge” - found a place in a corner of the manifesto of parties. In recent years, thishas occupied the centre-stage and holds the key to winning elections. For instance, in February 2020, the Aam Aadmi Party (AAP) led by Arvind Kejriwal mesmerised Delhi voters by promising freebies. They returned AAP to the seat of power with a thumping majority giving it 62 out of a total of 70 assembly seats.

In the just-concluded Punjab elections, AAP was voted to power getting 92 out of a total of 117 assembly seats. Here again, the freebies promised by Kejriwal especially free electricity to each and every household for consumption upto 300 units per month, waiving off all outstanding power bills, depositing Rs 1000 per month in the account of every woman aged 18 or above, guaranteed treatment for every Punjabi regardless of the cost of the treatment or operation and so on have played a dominant role in AAP’s victory.

In Uttar Pradesh too, the winning party, i.e., BJP had promised a host of freebies such as 20 million smartphones and tablets for poor students, two free LPG cylinders under ‘Pradhan Mantri Ujjwala Yojana’ every Holi and Diwali, free commute for women passengers above 60 years in public transport, financial assistance of up to Rs 100,000 for the marriage of girls belonging to poor families, free power to farmers for irrigation and so on.

A flood of negatives come to the fore the moment one starts introspecting on the subject. An overarching negative is abetment to corruption and erosion in governance ethics.

The Union Government’sstandards of financial propriety clearly lays down inter alia that “no authority shall exercise its powers of sanctioning expenditure to pass an order which will be directly or indirectly, to its advantage; and the expenditure from public moneys should not be incurred for the benefit of a particular person or a section of the people unless a claim for the amount could be enforced in a court of law or the expenditure is in pursuance of a recognised policy or custom”.

The reckless spending of the tax payer’s money on freebies is neither a recognised policy/custom nor it is sanctioned in a court of law. It is blatant financial irregularity that amounts to bribing voters using public money solely for gaining advantage in electoral politics. An individual candidate distributing cash or giving liquor bottles (using his own pocket money) to garner votes is treated as corrupt practice, and rightly so, whereas a party bribing voters that too using public money gets legitimacy (albeit de facto).

Second, unlike ‘normal’ budget expenses which are planned and backed by well-orchestrated efforts to garner revenue, additional financial liabilities imposed by the freebies promised in election manifesto affect the budgetary position of the State in a totally ‘uncontrolled’ and ‘unplanned’ manner. For instance, free power (consumption upto 300 units a month) and giving Rs 1000 per month to an adult woman will dent Punjab’s budget by about Rs 20,000 crore annually.

There being no corresponding revenue generation against this liabiity (as the same is unplanned), this will be at the cost of slashing other essential expenditure including on development. Alternatively, this will result in additional borrowings and resultant increase in debt to unsustainable level.At the end of five years, the afore-mentioned freebies alone will increase State’s debt by Rs 100,000 crore (this doesn’t include interest; including it, the impact will be even higher) on top of existing around Rs 300,000 crore.

Third, any welfare measure is intended to help the poor as with meagre income, she can’t afford to pay for basic facilities. But, the freebies given by contemporary breed of political parties defies this cardinal principle;for instance, free bus ride given by AAP in Delhi to ‘all’ women. This means, even a rich person is eligible if that person happens to be woman. Likewise, an adult woman in Punjab is entitled to Rs 1000 a month even if she is a millionaire. By contrast, a man won’t be eligible even if he is poor.

Fourth, unlike a normal welfare scheme which has a sunset date and has a chance ofgetting terminated after the underlying purpose is achieved, the freebies offered by winning parties have none. This is because such doles are not backed by any well-defined objective;herein the sole consideration is to influence voters. Freebies being at the foundation on which victory is secured, the concerned parties are prone to promising them election-after-election.

Fifth, look at things from the perspective of tax payers. When, the tax revenue is used for giving subsidies to the poor sections of the society -for instance, beneficiaries under Ayushman Bharat which covers 100 million poor households - it passes muster as welfare measure. But, when it is used to give freebies to all including the rich, it may even trigger non-compliance amongst tax payers.

Finally, assured of financial help to meet most of their basic needs ‘perpetually’, the freebies cult is changing the mindset of people in a way that makes them complacent towards work. This can lead to a scenario whereby India’s demographic dividend would be converted into a demographic liability.

In short, we will have a deadly cocktail of perpetual drain on the State exchequer leading to unsustainable debt, unfair and inequitable treatment leading to tension in the society, a negative orientation and unwillingness to work, non-compliance among tax payers, bureaucratic red tape and abetment to corruption. Put simply, freebies are a recipe for economic disaster. The only way to avoid it is to prohibit parties from promising doles.

In a judgment in S Subramaniam Balaji vs Government of Tamil Nadu &Ors in July, 2013, the Supreme Court had said that distribution of freebies of any kind influences all people; that “It shakes the root of free and fair elections to a large degree”. Yet, it had held that promises in the election manifesto cannot be construed as “corrupt practice” under the Representation of People Act (RPA), or under any other prevailing law and, hence, distribution of freebies can’t be stopped when the ruling party uses public funds for this purpose through the passage of Appropriation Acts in the state assembly.

After almost a decade, the matter has again come up before the SC - this time through a public interest litigation (PIL), filed by advocate Ashwani Dubey. On January 25, 2022 it observed “This is no doubt a serious issue. Budget for freebies is going above the regular budget. As the SC said before, this disturbs the level playing field,”

The top court recognizes that the problem is serious. Yet, thus far it has expressed helplessness. Whether, anything concrete will come out of the pending PIL, only time will tell.