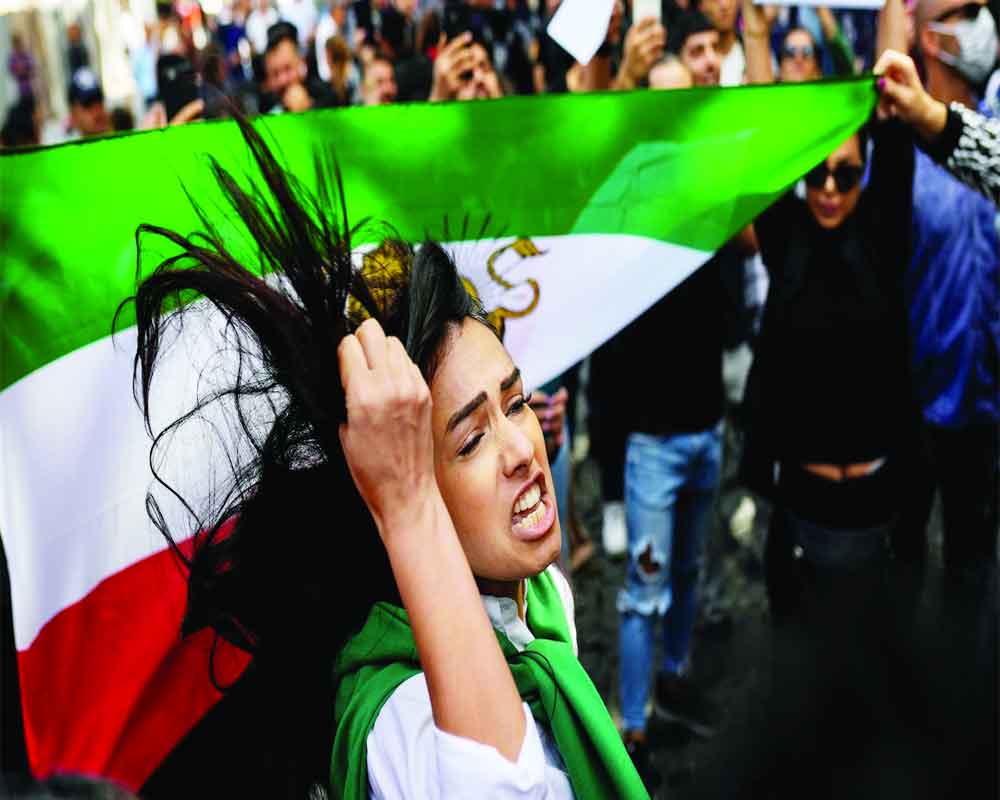 The Islamic Republic of Iran is in the throes of a new crisis. This time the regime of President Ebrahim Raisi is facing the rage from the country’s womenfolk. But by now the protesters irrespective of their gender are fiercely fighting the hollow hegemon in the Shia country. The agitators are shouting dreadful slogans such as “death to the dictator”, “don’t be scared, we are all together”, etc. This movement is unique. Its multifaceted nature indicates actions from street demonstrations to individual acts of defiance across Iran. The final target for everyone is no other than the supreme religious leader and head of the state of Iran Sayyid Ali Hosseini Khamenei. He is the second supreme leader of the country and is also the longest serving head of the state in entire West Asia for now.

Why the new protests in Iran? How did it all start? The origin of the current rage lies in the death of a 22-year-old young woman named Mahsa Amini. She died in the custody of the country’s Morality Police called “Gasht-e-Ershad” which in English is known as “Guidance Patrols”. However, it is widely popular as “Morality Police” and is a unit of Iran’s police forces. It carries out the responsibility of enforcing the laws of Islamic dress code in public life. As per the stated public regulations, all women who have already attained the age of puberty must wear a headscarf and a loose cloth in public. It must be said here that this law does not have any mention of a particular age. But when it comes to schools, all the girls have to wear the hijab starting from age 7.

What did Amini do? She was arrested in the capital city of Tehran in the middle of September by the Morality Police. Her fault was that she was not following the Islamic dress code for women in public. While in police custody, she had a stroke and later died in the hospital on September 16 after remaining in a coma for three days. This is what the Iranian authorities aired in public. Since then, millions of people have been protesting on the road.

Interestingly, Amini’s family said she did not have any pre-existing medical complications. To them, she may have been tortured to the point of death. However, no one knows the truth as the Iranian security and administration is purely opaque.

Amini hailed from the north-western city of Saqqez in the province of Kurdistan. Initially, the protests began in her hometown, but later spread to all the 31 provinces of Iran.

As Amini belonged to Kurdistan, the protesters have made it the centre of the current rage against the establishment. Meanwhile the international human rights groups have voiced concerns over the fate of the angry crowd as the authorities have started a severe crackdown on them in this province. Despite the use of brutal forces, the Raisi Government has not seen any sign of the movement coming to an end. Now the city of Sanandaz has become the flashpoint, the home region of Amini.

It has been reported by Hengaw, a Norway-based rights group, that an Iranian warplane accompanied by special security forces has already arrived in the city. It shows the clerical state is gearing up for more actions against the protesters. At the same time in the south-eastern province of Sistan-Baluchistan that has already witnessed the death of more than 90 people in the current crisis since September 30. So far no sign of any negotiation or discussion with different protest groups where it has erupted. It’s after all Khamenei’s land where there is no talk, only bullets which respond to the democratic forces.

Why are these hijab laws imposed over women in Iran? As per the authorities and the existing code of honour, women are supposed to wear and behave under strict Islamic laws in public. In fact, all these stringent laws started way back in the 1979 post-Islamic Revolution era. Since then, the Islamic Republic has been imposing a mandatory dress code for all women in the country. And the duty of the Morality Police is to see to it that women conform to the “proper dress code” as interpreted by the authorities.

All the officers belonging to this police force have the power to stop women whether they are displaying too much hair; their trousers and overcoats are too short or body-hugging; or they are putting on too much make-up. Accordingly, the police force can punish women. And once the police find any woman breaching these dress codes, the ideal punishments come in the form of hefty fines, imprisonment and flogging in public.

It is not the first time that women in Iran are protesting these unjust laws. Eight years back, on May 5, 2014, an online upsurge called “Stealthy Freedom” was launched by Masih Alinejad. She is an Iranian born journalist and activist based both in the UK and in the US.

This initially began as a Facebook page but gradually it has grown into a huge movement for the liberation of Iranian women. In this page, generally women from Iran share their photos without headscarves. This is being done to register their protests against the mandatory hijab laws in the country.

Further the historic Stealthy Freedom led to the rise of another movement by the same activist in 2017 called “White Wednesdays”. The idea behind this movement is to protest Iran’s compulsory hijab rule. Once again, this movement inspired a fresh one in 2018 called “Girls of Revolution Street” highlighting the resistance against hijab rule.

What the protesters are doing and demanding? The demonstrators are chanting slogans against the establishment. Young women are brazenly burning their headscarves in public. Many of them are cutting their hair in city squares. They are shouting against the stringent policies towards mandatory veil requirements of women in public. Simply, all of them are defying the law. International observers are advocating that the current chaos could be a potential threat to the aging regime as it has survived for more than a longer duration in a country like Iran. It’s also a purely multi-faced protest movement backed by numerous groups from inside the country unlike previous upheavals.

The beginning of this week has shown some worrying signals — the movement has spread to the country’s oil refineries in the southwestern part where the demonstrators are burning tyres and blocking public roads. It could have a potentially damaging effect on the already fragile, both Covid-19 hit and internationally sanction-hit economy of the nation.

Meanwhile the authorities are clamping down severe restrictions on the Internet and launching counter-revolutions to paint the current movement as a conspiracy by the US and Israel to destabilise the Islamic regime. Ailing and ageing, now 83 years old, Khamenei is still ruling the roost. Early this month the Iranian rumour mills spread the news that he is seriously unwell. He has survived prostate cancer surgery in 2014.

Many in western media reported that he is on death bed. But in mid-September, he appeared at a televised mourning ceremony for Arbaeen, the National Holiday to commemorate the martyrdom of Imam Hussein.

Indeed, the demise of Hussein in the course of the 7th century Battle of Karbala is regarded as an important signpost in the history of the foundation of the Shia history and theology. Afterwards, the radical came out in public on many occasions and the last being on October 3, when he delivered an address at a police academy in Tehran. His wish is super command. He has been able to maintain the fiefdom unleashed by great  Khomeini since 1989. But unfortunately, Khomeini is making Iran sleepwalk towards a permanent tyranny.

The embattled regime is moving nowhere. Its firm against the basic and universal rights of women recognised by all international covenants and institutions and its approach towards democratic and peaceful protests have not undergone any change for decades now. The pariah regime of Khamenei is once again finding faults with the Americans and the Israelis. His notorious tactics to counter protesters have highlighted his continued disregard for women rights in the country.

The rage is on against the theocratic state, specifically against Khamenei’s legitimacy and the radical system that he heads for decades now. The clerical state is under threat. But the international community must remember that Khamenei is not alien to such challenges. And he knows how to control the crowd.