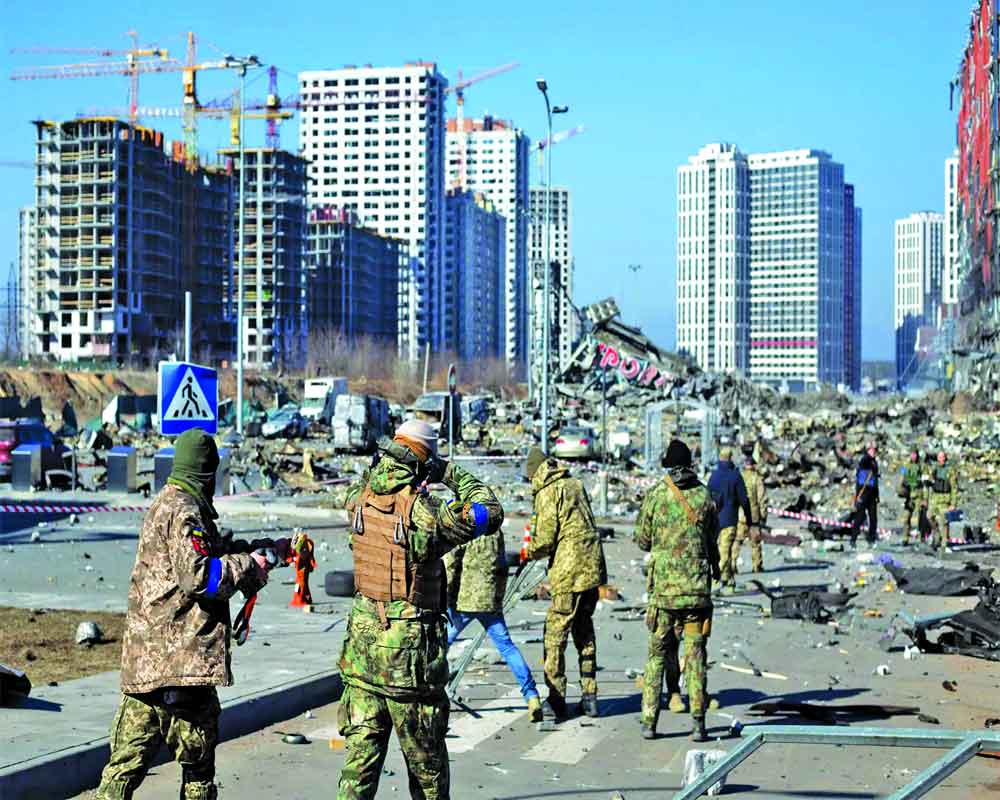 Russia’s Ukraine expedition hasn’t gone the way Putin wanted it. With losses mounting and the fall of Kherson, it may not be long before Russian soldiers retreat to their barracks

On 30th September of this year, in defiance of International Law, President Putin in a public display of bravado signed treaties absorbing the four occupied regions of Ukraine into Russia; Luhansk, Donetsk, Kherson, and Zaporizhzhia. In his speech at the ceremony, broadcast live, he stated that the people of those Regions were "our citizens forever".

However, it has not quite turned out that way. Just four weeks later we witnessed a rather bizarre event, as General Sergei Surovikin, Commander of Russian Forces in Ukraine, reported on the ground situation in Kherson to General of the Army and Defence Minister, Sergei Shoigu on live TV. In this, he stated, “that it was impossible to supply the city of Kherson, and that its defense would be futile”. He proposed a military retreat "in the near future" to the opposite bank of the Dnipro River. Shoigu agreed with his assessment and ordered him to "start with the withdrawal of troops and take all measures to ensure the safe transfer of personnel, weapons, and equipment across the Dnipro River."

Without a doubt, this televised event was staged for the domestic audience, especially the repeated emphasis on the saving of lives. Conscription and the humongous casualties being suffered, one report

suggests over a lakh killed and wounded, is not doing much for Putin’s popularity. It may also have been an attempt by Putin, noticeably absent, to distance himself and blame the military. That would rankle the rank and file who are paying heavily for his initial miscalculations.

What is truly inexplicable, and militarily questionable, is for a division plus of elite Airborne Forces to abandon their

positions without a fight. The adverse impact it must have had on their morale is not difficult to gauge. It is true that Kherson, located on the West Bank of the Dnipro River, has been cut off from Russian supply lines due to extensive damage to crossing sites, but there are ways around that problem. Moreover, no people or government worth their salt, give up their own territory without a fight, especially if it is a vital communication hub. Just because we tend to do so, especially where the Chinese are concerned, does not make it a universal norm! Defences in built-up areas, if properly organised and planned, can pose all kinds of problems for the attacker, from causing immense casualties to delay and disruption of plans, even allowing own forces to wrest the initiative. After all, Russia’s legendary defence of Leningrad for 900 days against the German Army finally put paid for Hitler’s ambitions and broke the back of Nazi Germany. More recently, the three months it took the Russians to finally capture Mariupol must have greatly impacted their overall plans and curtailed their ambitions.

There are some suggestions, laughable one may add, that pulling out these troops without getting embroiled in battle has not allowed Ukraine to claim victory. Others have suggested that this was done to make available highly trained forces to reinforce ongoing offensive operations in the Donetsk Region. The latter seems unlikely as it would be at the cost of weakening the defensive perimeter, reportedly established east of the Dnipro River, guarding one of the major approaches leading into Crimea. There is absolutely no doubt that the loss of Crimea would be the death knell for the Putin Regime.

Then some suggest that while this has indeed been a tactical defeat, Russia is winning strategically. Protests within Western Europe against rising energy prices and inflation, because of the stoppage of Russian gas and oil supplies and sanctions against it, will result in increasing disunity within NATO and the EU. This, in turn, would adversely impact Ukraine as there would be a drastic reduction in the quantum of material and financial support being provided to it.

They are wrong on two counts. Firstly, Western Europe was staring down the barrel of Soviet guns for nearly fifty years following World War II. The feelings of vulnerability and fear have certainly not vanished overnight and the last thing they need is for Russia to sit on their doorstep once again. Such a possibility would be sufficient motivation to ensure unity. Secondly, Putin’s ambitious attempts at reinvigorating the Russian Empire, however unrealistic that may be, has scared off much of Eastern Europe that sees itself in his crosshairs and made it a fickle and untrustworthy neighbour and trading partner for the West. One that most would wish to avoid having dealings with in the future, especially with Putin there. A shift away from Russian energy supplies is almost a given.

Finally, one cannot help but ask the question as to why are we so keen to keep up relations with a receding power that can only hold us back. Of course, the chances are that the recent visit by the External Affairs Minister to Russia was not just about discussing our energy supplies but at the behest of the Americans who are keen to keep back channels open for dialogue with Russia. More so, since their influence and relationship with the Chinese are at quite a low point.