Russia will not disappear soon

Russia will not disappear soon 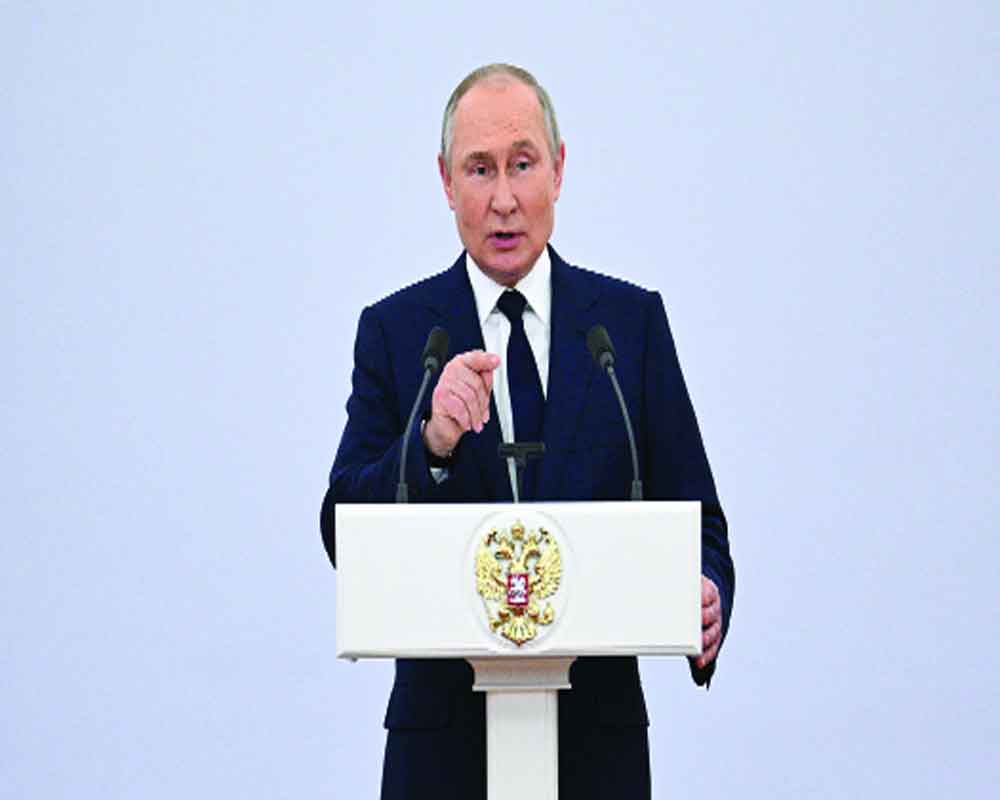 Russian President Vladimir Putin will almost certainly not be in power three years from now. The war he foolishly began in Ukraine has fatally undermined his political credibility among the Russian elite (and among a large though mostly silent part of the population). One way
or another, he will be replaced.
He may even save everybody the trouble by dying before he can be removed. He definitely doesn’t look well, his behaviour is increasingly erratic, and rumours that he is suffering from some terminal disease abound. Russia is not a fascist state, just a kleptocracy where the thieves and the thugs have taken power, but Putin’s personal behaviour does begin to resemble Hitler in his bunker in the final days, and Hitler too was very ill. Putin knows nothing about military matters, but he is reportedly micro-managing single ‘battalion combat groups’ (about 1,000 men) in the currently stalled Russian offensive in eastern Ukraine, trying to retrieve a military situation that has sunk into stalemate. Very Hitlerian. So what will become of Russia when
he goes?
Alexander J. Motyl thinks it may just disappear. In an opinion piece in ‘The Hill’, the leading political website in Washington, Motyl, a political scientist at Rutgers University, suggests that “ The Russian Federation could metamorphose into 10 or more states, only one of which would be known as Russia. That would change the face of Eurasia forever.” It certainly would, but it does imply the permanent demise of a state that has dominated northern Eurasia for the past four centuries (the first Russians reached the Pacific in 1647). It also ignores the remarkable homogeneity of that state’s population: 81% are ethnically Russian, while none of the many minority group even reaches 4%. There have been occasions, most recently during the civil war of 1917-22, when Russia was temporarily carved up into rival jurisdictions, but these interludes have never lasted long. The sense that there is a special Russian identity, even a unique ‘Russian civilisation’, always reasserts itself.
Decolonisation came late to the Russian empire and was harder to recognise, because Russia’s imperial possessions were around its own land borders rather than across the oceans. Nevertheless, it was the same process, and just as irreversible (as Putin has been discovering).
Russia is as unlikely to split up permanently as France or Japan. Motyl’s speculations on its break-up are wishful thinking, possibly motivated by the fact (unmentioned by ‘The Hill’) that both his parents were born in Ukraine.
It is understandable that Ukrainians might wish Russia to vanish, but that is not going to happen. So what will happen when Putin goes?
We cannot know yet what a genuinely post-Communist Russia would look like. Although it’s 31 years since the collapse of the Soviet Union, almost all the people in senior political positions began their careers in the Communist Party.  The ideology was dumped, but the administrative style and the factional struggles remain.
Moreover, one single man, Vladimir Putin, has dominated Russian politics for more than two-thirds of that time. It’s hard to disentangle what is intrinsically Russian in the way Russia has been run during that time from what was just part of Putin’s personality, but we are about to find out.
The default position is to say that the Russians are somehow fundamentally different from other Slavs. After all, the Poles and the Czechs got real democracy and genuine prosperity after 1991, whereas the Russians got Putin, border wars, and (for most people) genteel poverty.
But there were two big differences that had nothing to do with ‘national character’, whatever that is. One was that all the former ‘satellite countries’ of Eastern Europe immediately ditched their local Communist collaborators and got a whole new set of politicians, whereas Russia was essentially stuck with the old Commies wearing new hats.
The other difference was that the western Slavs experienced the change as liberation, whereas their former rulers saw it as a loss of empire that stranded tens of millions of Russians in places that were suddenly foreign countries.
It would have been unreasonable to expect these two sets of people to react in the same way, and sure enough they didn’t. But it’s equally unreasonable to be convinced that Russians will go on behaving in the same ways when the ex-Communist ruling elite loses power (which may be imminent) and a new post-imperial generation takes over instead.
We have no idea what’s coming out of the box then. It could even be something good.