Safe poll campaigning is the need of the hour

Safe poll campaigning is the need of the hour 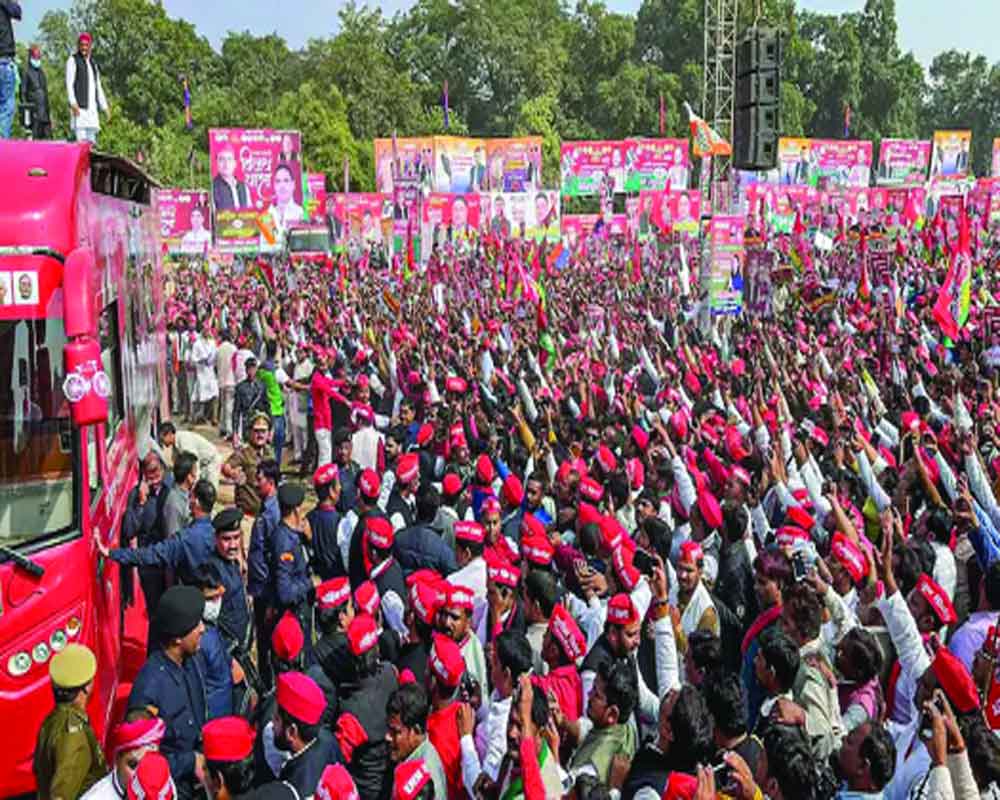 If Omicron spreads further, as it has in the United States and Europe, political parties in India will have to take an equal share of the blame

Many people doubt whether it is necessary to hold the upcoming Assembly polls in the poll-bound states next month or postpone them, as the Allahabad High Court has suggested.In the previous round of elections last year, the Madras High Court had held the Election Commission irresponsible for conducting the polls during the pandemic. Some argue that, after all, there are precedents of postponement of polls earlier even though former Chief Election Commissioner S.Y Quereshi thinks Constituti-onally it is not possible.

With the scheduled elections in Uttar Pradesh, Punjab, Goa, Manipur, and Uttarakhand, next month it is clear that the people can escape the killer Covid-19 only if the Election Commission guidelines are strictly enforced.

Nearly 70 countries the world over have deferred elections because of the pandemic. Forty-two countries have postponed national elections and referendums. Even if the EC could not delay the polls as the political parties want to stick to the schedule, can the Commission at least ban the super-spreader poll rallies?

In the past few months, as infections fell, India had lifted mainly restrictions on public gatherings, travel, and public spaces. However, the new variant Omicron is spreading fast. Covid-19 cases in several states have been rising, and the third wave may peak around February. Things are complicated by people refusing to wear face masks. They get tested less frequently than before, and congregate in large numbers.

Explaining the decision, Chief Election Commissioner Sushil Chandra said recently: I have been told that 86 per cent of people in the state have got the first dose and 49 per cent the second shot of Covid vaccine. We have been assured that in 15 to 20 days, all eligible people will get their first dose. We have asked for increasing vaccination.

The Commission has decided to increase the voting time by an hour to make the voting easy, assuring that all poll officials on duty would be fully vaccinated. The poll body will reach out to the doorsteps of those who cannot come to the polling booth to vote. Additionally, live webcasting facilities will be available at around one lakh voting booths to ensure transparency in the election process. Chandra said because of the pandemic, the number of polling booths in the state would be increased by 11,000 to maintain proper social distancing.

While poll-bound states have taken many steps to check the pandemic, party leaders enjoy addressing massive rallies. As parties scramble for votes, politicians are not the shining examples of how to follow Covid-10 regulations. They are brazenly going ahead with mega rallies. For instance, SP chief Akhilesh Yadav’s Unnao rally, Union Home Minister Amit Shah’s roadshow in Hardoi, and Priyanka Gandhi’s women’s march drew massive crowds. The most prominent state among the five election states, Uttar Pradesh, has been declared a Covid-affected state. Some wonder why poll rallies are unregulated when the government has regulated the number of people at weddings.

Can the nature of poll campaigns change? Most parties are now active in social media and use Whatsapp and mobile communication besides TV ads. A digital campaign is also an option.

Due to the efforts of the Union and state governments, we have controlled the pandemic to a great extent. But no one knows the trajectory of the Omicron variant. The government machinery is on high alert, but people have to obey government regulations like wearing the mast, keeping the social distance, and avoiding crowded places.

If Omicron spreads further, as it has in the United States and Europe, political parties have an equal share of the blame. In any case, all those who come to listen to their ‘netas’ do not always vote for the party. If wiser counsel prevails, leaders might opt for virtual rallies and other methods of digital communication. Ideally, the nature of poll campaigns must also change, and the political fraternity should come together and think of safe campaigning methods. Above all, it is for the people to comply with Covid-19 regulations as the government alone cannot do everything to contain the pandemic.