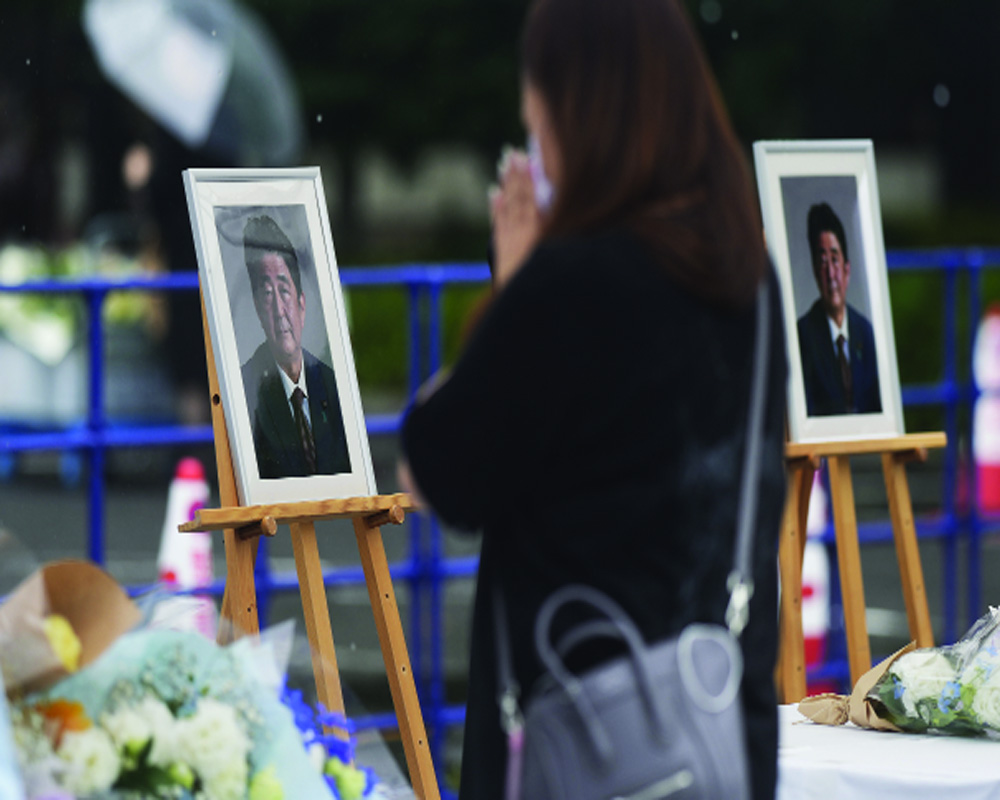 Abe was a towering world statesman. His untimely and tragic death will change the political landscape of Japan and Asia. Most political observers remember Abe for elevating Japan’s place in the global governance system. His ghastly killing will have reverberations in the Japanese politics and society for decades to come

July 8, 2022, has become one of the darkest days in the annals of the post-war history of Japan, with the assassination of former Prime Minister and Liberal Democratic Party (LDP) leader Shinzo Abe during his election speech in the western province of Nara. The assassin, Tetsuya Yamagami, a 41-year-old unemployed, fired almost point blank at Abe’s chest from behind.

Abe’s murder is raising critical questions; like who was the shooter and what was the motive behind the assassination. Earlier, Yamagami worked for a manufacturer in the Kansai region from around the fall of 2020. But he left that job in May this year as per media reports. He also worked as a member of the Maritime Self-Defence Force for about three years. Yamagami, after the assassination, revealed that he initially planned to attack the leader of a religious group called “Unification Church” better known as “Moon Sect” who, he believed, forced his mother to pay hefty donations to the group thus bankrupting his family. Yamagami also confessed to the police that he wanted to kill Abe believing he had ties with the controversial religious sect. After the tragic incident, the Unification Church confirmed that Yamagami’s mother attended the congregation, but it refused to give details about the donation part.

Yamagami told police that he had been planning for the attack for months. He followed Abe at his campaign locations, including the city of Okayama, more than 120 miles from Nara, a day before the assassination. At times he considered a bomb attack before opting for a gun. After the incident, when the security agencies searched his home, they found items believed to be explosives and homemade guns, including the ones similar to the weapon used in the current attack. This clearly indicates that Yamagami has been planning the killing for quite some time; he was just waiting for the right time to execute his plan. And finally, he got everything right on July 8.

The “Moon sect” was established in Korea in 1954 by a man called Sun Myung Moon, who preached new interpretations of the Bible and conservative, family-oriented value systems. During that time, the sect claimed that it had nearly three million followers. And all of them accepted Moon as the “True Father”. He was born into a farming family currently located in North Korea. As the story goes, at the age of 15, he claimed to have had the sight of Jesus Christ asking him to continue his mission. The purpose of Moon establishing the sect was to lead humanity to a sinless purity. He founded his own church in Seoul, but soon became involved in local politics. Moon took an anti-Communist stand in the beginning and finally received sympathy from the military regime of the country. He gradually came closer to political bigwigs of the time like then US President Richard Nixon. In fact, he offered public support to Nixon when the latter was embroiled in the infamous Watergate Scandal. Again in the 1980s, Moon developed close connections with the French right-wing movement known as National Front Movement. But in due course of time, the austere church turned out to be an economic enterprise expanding its influence into various industrial sectors like construction, food, automobile, tourism, media, etc. Soon Moon became a billionaire godman. Later he settled in the US in the 1970s, but he was jailed for a year on the charges of tax evasion in America. Currently, the Reunification church is under the control of Hak Ja Han.

Yamagami believed that the Moon sect had influence on Abe, and he started linking Abe with all the economic problems of his family. He was convinced that Abe would send a message of support to Moon sect’s religious congregations.

But Tomihiro Tanaka, president of the Japanese branch of the Moon Church, claimed, “Abe showed his support for our global peace movement. However he never registered as a member of our church. We are a bit puzzled because there is a long way to go between holding a grudge against us and killing Mr Abe. We can’t understand the suspect’s motives, so we will fully cooperate with the police to unravel the mystery.”

Japan’s longest serving Prime Minister Abe redefined politics for a generation. He served two terms as the Prime Minister from the right-leaning LDP: first from 2006-07 and then 2012 to 2020. His second stint was the longest consecutive term for a Japanese Prime Minister. People and associates close to him always mused about what was on his mind. Indeed, he changed the worldview of Japanese politics.

He realised the fast-growing aggressive behaviour of the three close non-democratic neighbours:  China, Russia and North Korea, all nuclear powers. Therefore, he had to reinvent ties with other growing power houses in the Asia-Pacific like India and Australia. His idea of free and open Indo-Pacific and Quad framework has heralded a new era of safety and security to this part of the globe. While strengthening the US-Japan alliance, he did enough to counter the Chinese neo-imperial initiative called Belt and Road Initiative with the help of the G7. He revived the Sino-Japan relations.

At home, Abenomics 2.0 launched in 2016 was more to bring the younger generation to the centre stage. Abe also lowered the voting age from 20 to 18 so as to encourage more young people to participate in politics. Truly, his noble intent was heard and responded to by the youth of Japan. Another distinct achievement for him was securing the venue for the Tokyo Olympic Games in 2020.

The attack on high-profile political dignitaries like the PM is rare in Japanese politics, but not without a precedent. Precisely, there have been a number of such murderous attempts made on top politicians in the country either when they were in power or after they left the office. More than 101 years back in the year 1921, Takashi Hara, a commoner who became the PM of Japan and the man who founded the full-fledged party Cabinet System, was stabbed to death by a young railway worker at Tokyo Station. Then nine years later, a gunman attacked then Prime Minister Osachi Hamaguchi at the same Tokyo station, and he succumbed the next year. In 1932, Prime Minister Tsuyoshi Inukai was assassinated by a group of armed naval officers who stormed into his office. The assassination is known as the “May 15 incident” in Japanese political history.

It must be noted here that Abe’s grandfather Prime Minister Nobusuke Kishi was stabbed in 1960 at a reception in his office. In the years 1975, 1992 and 1994, Prime Minister Takeo Miki, Deputy PM Shin Kanemaru and PM Morihiro Hokosawa were attacked, but they all survived.

Without an iota of doubt, Abe was a towering world statesman. His untimely and tragic death will change the political landscape of Japan and Asia. Most political observers will remember Abe for elevating Japan’s place in the global governance system. His assassination is undoubtedly one of the most shocking tragedies of this century for Japan. But what is more important is that his ghastly killing will have reverberations in Japanese politics and society for decades to come. When he rose to power in 2006, he had to exit his office in an ignoble fashion mainly owing to illness accompanied by a litany of corruption scandals and political missteps. But in 2012, he made a powerful comeback and surpassed the records of all the previous Prime Ministers of Japan both in length of service and record of success. However, he had to step down in 2020 because of his illness again. Above all, his grim determination ensured a better future for his motherland. While bidding goodbye to a real globe-trotter in true sense of the term, it can well be said that his ideas, vision and worldview will certainly have an indelible mark both in Japanese and world politics. Sayonara, Shinzo Abe!