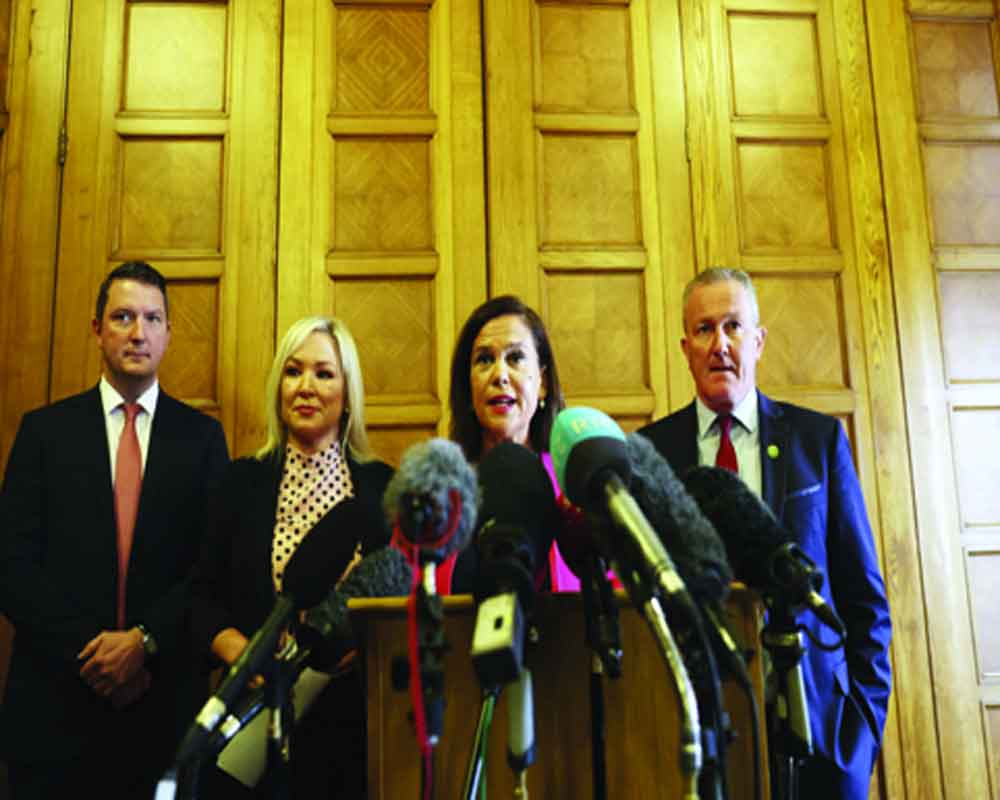 It is very clear that Sinn Fein’s victory will not push for the union of Northern Ireland with the Republic of Ireland at once, but it has started the process. Britain’s future measures towards this part of its territory may be more cautious in the days to come. Politically speaking, the Sinn Fein has to go a long way to muster a clear majority as the roots of the DUP are still very solid in many areas across the island

The Sinn Fein’s historic win in the Assembly election is signaling a much-awaited change in the power corridors in Northern Ireland. It is the beginning of a new era. The old guards (Democratic Unionist Party) were forced to give way to a new political dispensation (Sinn Fein) in last week’s election. Once again what has come to the forefront is that for long the Sinn Fein has been linked to the Irish Republican Army (IRA), a paramilitary group that used violent tactics to free Northern Ireland from British control. Once it used to be the Catholics vs the Protestants that led to a series of violence for decades in Northern Ireland. The IRA is a Catholic and nationalist organisation that conducted an armed insurgency against the state for a united independent Ireland whereas the DUP mainly evolved from Protestant Unionist Party that itself came out of the Ulster Protestant Action Movement.

This election has spearheaded a new debate, a new narrative and a new future in this part of the UK. The total number of seats in the Assembly is 90, but constituencies are only 18. The Sinn Fein won 27, DUP 25, Alliance Party 17, Ulster Unionist Party 9, Social Democratic and Labour Party 8, and the rest of the smaller parties and independents one each.

In the 2017 election, the DUP won 28 seats and Sinn Fein 27. The margin of victory between the two main rival parties was very narrow. In 2017, the Social Democratic and Labour Party won 12 seats, the Ulster Unionist Party 10, the Alliance Party 8, the Green Party 2, while the People Before Profit and Traditional Unionist Voice had one seat each.

What does this victory of Sinn Fein mean for Northern Ireland? It means a lot for the party as it has won a majority for the first time in the Assembly election. And for the DUP, it is a loss of face. The Sinn Fein has received the most first preference votes in the election. The party said that the Brexit move unleashed by the Boris Johnson Government in Britain accelerated the debate on reunification with the EU member Ireland because most of the Northern Irish people voted to remain with the Union. The Good Friday Agreement of 1998 recognises the right of the people on the island of Ireland to reunify if border polls in Ireland and Northern Ireland support it. Whereas the existing British law says that the Secretary of State for Northern Ireland should order a vote if it appears likely that a majority of voters want a united Ireland but is unclear on how that should be decided. However, the Irish Government must also agree to the same.

Michelle O’Neill, the First Minister of the Northern Ireland Government, is the first nationalist politician to occupy that position since its creation. During the election, the DUP and the Sinn Fein were battling hard for the top post because it offers an entitlement to nominate the next First Minister. But it must be noted here that the office of the First Minister and the Deputy First Minister is an equal office with joint powers in Northern Ireland. But what has been termed as symbolically important is the allocation of the titles.

Why was it so important for the DUP to win the Assembly election in 2022? It was indeed crucial for the DUP to win the election as it has been the most dominant and largest political party since the formation of Northern Ireland in 1921 as a Protestant majority province. Earlier the Assembly was known as the Stormont Parliament in the name of the Stormont Estate in East Belfast where the building is located. Generally, the Stormont is the commonly used name to refer to the Northern Ireland Assembly.

What is Sinn Fein all about? Why is its win so significant for Northern Ireland? The Irish phrase “Sinn Fein” refers to “We Ourselves” or “Ourselves”. The party was formed by Arthur Griffith in 1905 when the very ideology of Sinn Fein was brought into practice. Originally Griffith was the leader of the Cumannnan Gaedheal i.e. “Party of the Irish”. But the current form of Sinn Fein emerged only in the 1970s. The policy of Sinn Fein enunciated by Griffith highlighted passive resistance to the British, non-payment of taxes, the formation of an Irish ruling council and independent law courts.

Untill the rise of the Easter Rebellion or Easter Rising in the month of April (24-29) 1916 in Dublin by the Irish republicans, the Sinn Fein was not in the limelight around the world. This rising was all but to challenge the colonial rule of Britain over Ireland and to establish an independent Irish Republic.

It was an armed insurrection launched for the first time during the Irish revolutionary period. After this rebellion, the Sinn Fein became the rallying point for a new brand of ultranationalist sentiment which is also known as “Republicanism”. The fury of the nationalists could well be gauged from the historic proclamation of the Republic published in 1916. The proclamation known as the “The Provisional Government of the Irish Republic to the People of Ireland” clearly says: “Irishman and Irishwomen, in the name of God, and of the dead generations, from which she receives her old tradition of nationhood, Ireland, through us summons her children to her flag and strikes for her freedom… We declare the right of the people of Ireland to the ownership of Ireland and to the unfettered control of Irish destinies to be sovereign and indefeasible…” This clearly hints that the Irish people wanted to come out of the colonial yoke of British imperialism when the latter was fighting the First World War in Europe.

Against this background, the historic win of the Sinn Fein is to be taken seriously by the people of Ireland, the Republic of Ireland and of course by Britain. Now the political situation in Northern Ireland has become fragile. It seems the unionist DUP will not join the new government until the post-Brexit custom arrangements.

The Sinn Fein, the single largest party, now has the right to occupy the post of the First Minister. But a functioning Executive cannot be established without the DUP taking the role of the Deputy Minister in the new government. As per the constitutional mandate of Northern Ireland, the DUP has to take the required role of the Deputy in the power sharing agreement. If this power sharing does not take place, it could trigger a constitutional crisis in Northern Ireland.

Many wonder why the Unionists are against the deal. The Unionist parties are opposed to the protocol as to them placing physical border across the Irish Sea absolutely undermines the longstanding union they advocate between Northern Ireland and the UK. Paul Givan of the DUP in fact resigned over this matter as the First Minister of Northern Ireland in February. Just before the Assembly election, in a public debate Sir Jeffrey Donaldson, the leader of the DUP, made it clear that his party may not take part in the new government unless the outstanding issues around the protocol are solved amicably.

Today, leaders like Donaldson have voiced concerns about a decisive action on the protocol at the earliest. Indeed, this protocol is very necessary as the border is too sensitive an issue which can’t be ignored.

One must flash back on the fragile history of Northern Ireland and how the past peace efforts came after decades of armed fighting by the IRA against the UK. And clearly, the agreements to bring back peace to this part of the UK also included the removal of visible signs of border. Now, if any physical border is erected between Northern Ireland and Britain, this could rightly threaten the historic peace deal known as the Good Friday Agreement or the 1998 Northern Ireland Peace Deal.

It is very clear that Sinn Fein’s victory will not push for the union of Northern Ireland with the Republic of Ireland, but it has simply started the process. Britain’s future measures towards this part of its territory may be more cautious in the days to come. Politically speaking, the Sinn Fein has to go a long way to muster a clear majority as the roots of the DUP are still very solid in many areas across the island.