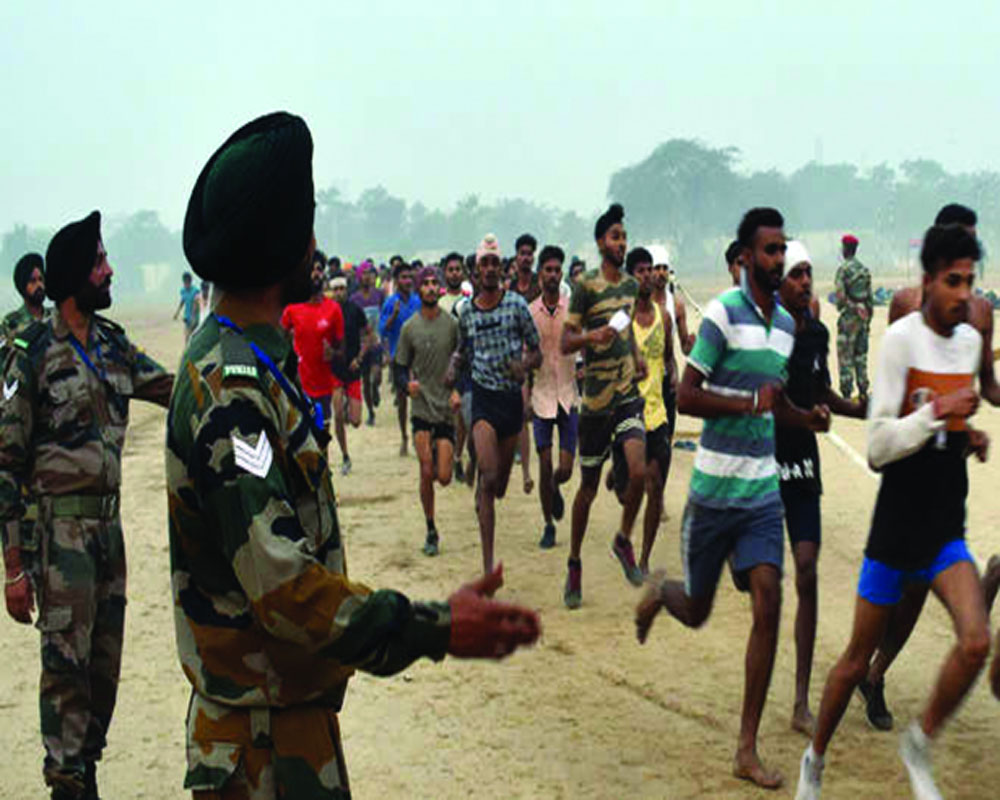 The Govt’s ad hoc approach towards Army recruitment has adversely impacted youngsters, and even the military’s operational preparedness

Recruitment for the Army has been at a standstill over the past two years as the Government contemplates drastic changes in its recruitment pattern and consequently its manpower profile. As recruitment is age-driven, this halt on recruitment has adversely impacted youngsters, mostly from rural areas, who suddenly find themselves stuck in limbo. The tragic suicide by young Pawan of Bhiwani district on becoming overage in the interim says it all.

But his case is just the tip of an iceberg as over 1 lakh candidates, having cleared the physical tests, are still awaiting conduct of the written exam as time ticks by.

It has adversely impacted the Army as well. Approximately 50,000 personnel retire annually, which implies that the Army is currently deficient of nearly 10 per cent of its authorised strength. This has impacted operational readiness, and will have a knock-on effect on training and manpower management in future. The fact is, it takes 18 months from the time an individual is selected and joins his unit as a trained soldier. Clearly, halting regular recruitment, for whatever reasons, has been an imprudent move that has negatively impacted our national security and should have been avoided at all costs, given the fragile
security environment that we confront.

While the specifics of the much hyped “Tour of Duty” (ToD) proposal being thrust on the military by the Government and its mandarins are not fully known, its broad contours suggest that all recruitment undertaken will be for a period of four years, including training. All recruits will be enrolled as ‘Agneepaths’, a new rank below that of a sepoy. On discharge after completion of their terms of engagement, 25 per cent of that batch would be selected for permanent absorption and re-enlisted as Sepoys, clearly opening another avenue for corruption in the selection process.

It is theoretically a wonderful proposal, ensuring that the Army maintains a young profile and selects only the very best from each batch for permanent absorption. Moreover, it will also result in substantial reductions in the pension outlay, while simultaneously ensuring that those released into the job market, having imbibed values that are synonymous with our Armed Forces, continue to display high standards of discipline, integrity and work ethics.

These are indeed substantial reasons to undertake drastic reforms of our military recruitment system but, as critics have correctly pointed out, such budgetary constraints seem to only apply to the military and not the CAPF. They have seen unprecedented growth over the past decade, suggesting that either the Government’s priorities are skewed or it believes that our own citizens pose a greater threat than our inimical neighbours.

But as Albert Einstein said: “In theory, theory and practice are the same but, in practice, they are not.” That holds quite true for the ToD proposal as well. Obviously, those at the helm have not thought it through and have little or no understanding of how a military functions. Calculations suggest that in 25 years from now in regular combat units, for every three Agneepaths there will be one regular combatant, most likely an NCO. It would be provided that those selected all re-enlist, an unlikely proposition as some of them may have better prospects outside. Moreover, keeping in view that Agneepaths are unlikely to be sent for advanced training till permanently absorbed, we will have a military where the vast majority of our soldiers will be no better than semi-skilled labour, lacking espirit de corps and motivation, not unlike the Russian conscripts, being used as sacrificial goats to fulfil Putin’s ambitions in Ukraine. Do we truly want to leave this nation’s sovereignty in the hands of such unskilled labour? The answer, if we are to be honest, has to be a definitive no.

It was once said of our cricket team that they were adept at snatching defeat from the jaws of victory. Well, a well-trained and respected military, gutted from the inside, seems to be heading in the same direction, much like the Titanic blithely speeding towards its doom; its own hierarchy unwilling or unable to display the requisite spine needed to block this nonsensical proposal. It is indeed a travesty that such leaders have been entrusted with the defence of this great nation.

Clearly, at the end of the day, this proposal is just a penny-pinching exercise aimed at massaging an oversized ego, regardless of the disastrous consequences it would have on our national security. There are far better alternatives, like enhancing our Territorial Army instead, that could have achieved similar results. However, an Opposition that is no more than a detested family enterprise and a media resembling pet poodles for the most part, have emboldened this Government to push through change, however grievous a body blow it may be to our body politic. The irony is that a party that detests Nehru is attempting to further his unfinished agenda of diminishing the military. Well, we all know how that ended, don’t we?