The current mess in Lankan politics

The current mess in Lankan politics 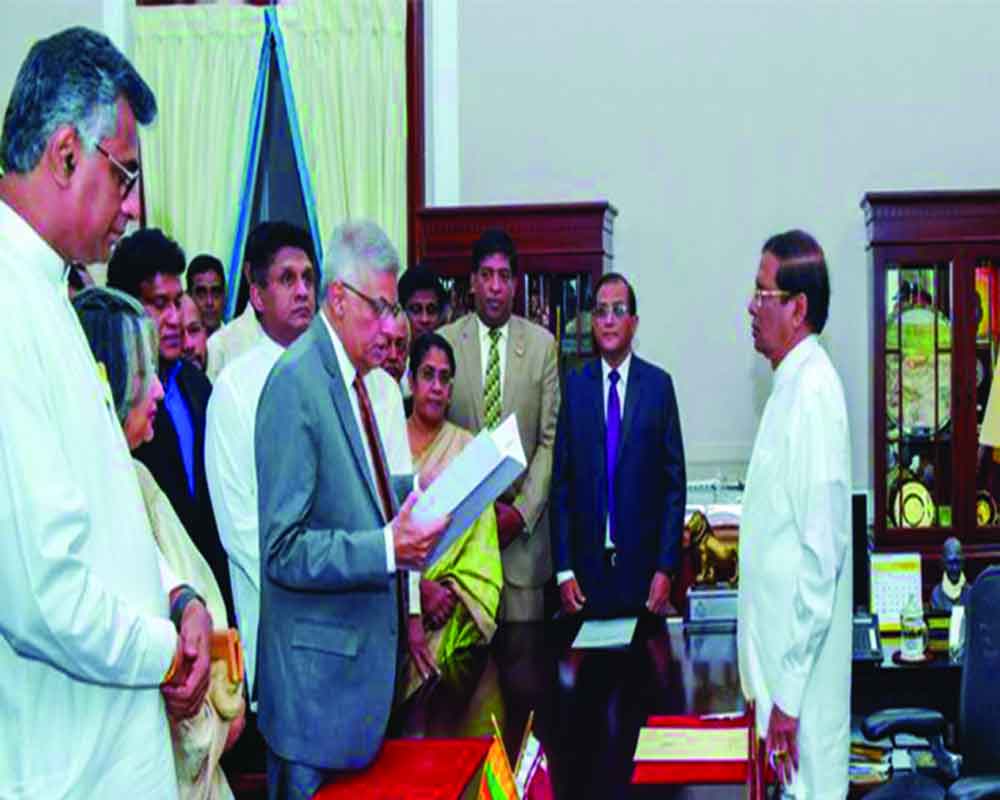 The installation of a new, and experienced, Government in the island nation is a harbinger of good change, and India must lend a helping hand

Now that a responsible and experienced replacement for the unpopular and forcibly ousted Prime Minister Mahinda Rajapaksa has been appointed, it is time for Sri Lanka to decide how it wants to recoup the current economic depression. On the television, Ranil Wickremesinghe, the new Prime Minister, has stated that he has a revival plan. He has some credibility because of his track record, as well as his having served as the PM five times. What role India wishes to play is for South Block to decide; I personally do feel that India should try and play a significant role in Sri Lanka, especially because of its geopolitical situation. Both New Delhi and Colombo are aware that India has a 7,500-km coastline in the Indian Ocean. On the other hand, Sri Lanka is strategically at the southern end of the Indian praayadweep (peninsula).

Coming to the current situation in our southern island neighbour, there is an unalienable law and order scenario with Sri Lanka’s citizens in open conflict with security forces. I have visited Sri Lanka four times in my lifetime and am somewhat familiar with the political and ethnic issues there, but I must admit that the torching of recently deposed PM Mahinda Rajapaksa’s ancestral home in Hambantota by a mob has come as a bit of a shock as people there are generally an amiable and easygoing lot. However, keeping cordiality is difficult when one has to wage a daily struggle merely to survive; in Sri Lanka’s case, the country has been suffering prolonged power cuts (up to eight hours a day in several parts of the country, according to several reports), lack of food and inflated cost of all essential items.

Most international agencies have severely downgraded the country’s sovereign ratings and its foreign exchange has fallen, too. Sri Lanka, even in happier times, lived mainly on tea, rubber, coconut and tourism as the main revenue earners. Moreover, the ruling Rajapaksa dynasty’s profligate ways and allegations of corruption against the family have only served to light a torch to an already explosive situation. The discovery of a fleet of some of the world’s most expensive automobiles, including Ferraris and Lamborghinis, hasn’t exactly been a positive advertisement for responsible behaviour, let alone good governance.

If one talks to a Sinhala scholar or journalist, he may well begin by blaming the cost of Lanka’s civil war with its Tamils. He would not admit that the Tamils have been in eastern Sri Lanka since the beginning of civilisation. I first visited the country in 1964, and could soon thereafter sense that the Sinhala jealousy towards the Tamils was noticeably intense. For example, my father-in-law predicted that the next chief executive of the British Ceylon Corporation (like the British Indian Corporation at Kanpur) would be Pereira and not Swamidasan, who was more competent. The former was a Sinhala. The latter subsequently migrated to Australia. This was less than even the tip of the iceberg.

The other bias that the majority Sinhalas have harboured has been towards Hindus. Indians, therefore, would be well advised to generally field a north Indian and certainly avoid a Tamil or even a Malayali when it comes to official dealings with Lanka. Some thinking Sinhalas apprehend that it is not ruled out that, sooner or later, Tamil Nadu could pressure New Delhi to act against Sinhala interests.

The dark clouds hovering over Sri Lanka were visible as early as 2020 when the global pandemic struck. International rating agencies like Standard & Poor’s and later Moody’s downgraded Sri Lanka’s long-term sovereign credit ratings. These global agencies had raised the issue of the Sri Lankan Government’s fiscal health and its ability to service the debt it had incurred from the World Bank and International Monetary Fund (IMF). The Ukraine war has worsened things for the Emerald Isle.

The crisis there needs urgent succour and India must decide how far it wants to go in order to help. For the record, the new Prime Minister has already voiced his Government’s priority of furthering relations with India. Secondly, Colombo must persuade its creditors to wait patiently, so that what India sends would be of help to Lanka’s future rather than applying balm to its past. India could then offer that proportion of Sri Lanka’s future needs which the island country can earn and utilise to pay back. We have mentioned the mutual stake in the Indian Ocean. Both countries must protect each other’s interest in this vast pond. This ought to include a Sri Lanka administration being more sympathetic to the people of Jaffna. Any Indian loan(s) should ideally be for use to procure all or any goods/items from India. We are capable of supplying anything from butter to guns.

The Sinhalas are a frank, friendly and pleasure-loving people and not very money-minded. As was revealed by a scholar in Kolkata, while Karl Marx had said that “religion is the opium of the masses”, a loan is the opium of the classes. It is in this innocent sprit that the Sri Lankas have borrowed money. Any new lender should be conscious of this.