The rise and fall of political dynasties

The rise and fall of political dynasties 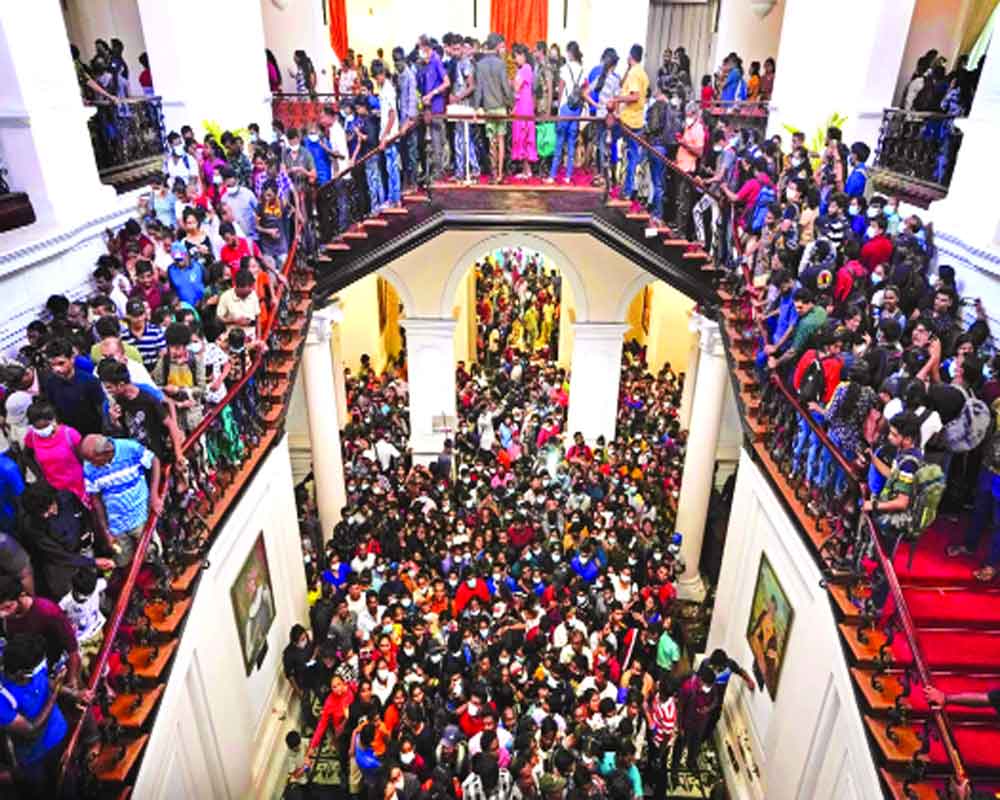 The debate in Sri Lanka was: What should take priority — economics or politics? The message from Aragalaya protestors is: fix politics first

Sri Lanka has witnessed its Arab Spring moment. Accused of enjoying extra-constitutional authority and with 27 military-led task forces in governance, the Sri Lankan Army (SLA) has steered clear of intervention in support of Rajapaksas. The writing was on the wall…literally.

What we’ve seen happen in Sri Lanka on July 9 is nothing short of revolution but protestors have targeted only corrupt politicians. Street power on this scale has not been witnessed in South Asia. After the economic meltdown, the aim of leaderless mobs was removal of Rajapaksa clan. Both brothers, the heroes of the war against Prabhakaran’s Tamil Tigers, were in the dock since March for political and economic mismanagement. Elder brother, Prime Minister Mahinda Rajapaksa, was forced to resign in May, replaced by Ranil Wickremesinghe whose United National Party had been decimated in the elections. The protestors had continued their ‘Gota Go Home’ campaign on the iconic Galle Face Green. Ignoring their voices, Gotabaya, a former Colonel, began consolidating his power with the help of Wickremesinghe.

Gotabaya had promised to install an all-party interim Government, order fresh elections and curb powers of the President with the 21st amendment. In an interview, he said he will not go as “a failed President, run his full term but not stand for a second term”. He admitted he had made mistakes over tax cuts, chemical fertiliser ban and delay in approaching IMF. He pointedly mentioned that as part of any austerity programme, he will not cut defence spending but reduce only recruitment. The Rajapaksas put the military on a pedestal after the 2009 war victory when there were calls to downsize the army. The 100,000 army can be reduced by half. Facing no threats, military expenditure at 1.93 per cent GDP is one of the highest in south Asia.

July 9 saw the biggest countrywide protests with people storming presidential palace and Wickremesinghe’s private home becoming collateral damage. Like Mahinda, Gotabaya was whisked off to a military base from where he announced he would step down as President today, a full moon day considered auspicious for Buddhists. BBC reported that Gotabaya and Mahinda were on two Sri Lankan Navy ships, ready to flee but the army reported they are in Sri Lankan territorial waters and Gotabaya will return on July 13. Defence Secretary former Maj Gen Kamal Gunaratne had earlier said, according to Constitution, it was the duty of the military to protect a former President. More than six weeks after Wickremesinghe took over, he too will resign for failing to evolve an economic recovery plan. Another Rajapaksa, former Finance Minister Basil, was prevented from flying out.

Last month, NGOs like Proposal for Change by Bar Association Sri Lanka, March 12 Movement, National Movement for Social Justice, Direction Sri Lanka, Way Forward for Young Leaders — altogether some 12 entities met with parliamentarians. The expectation of a watered down 21st Amendment that would have allowed Gotabaya to continue in office all powers intact, forced the exit of Gotabaya and Ranil. Parliament Speaker Mahinda Yapa Abeywardene is likely to become the interim President. His term will run 30 days until a new President is elected. He will ask Parliament to elect a new Prime Minister. But a change of guard alone will not lower the mercury as Wickremesinghe on July 5 announced that the country was bankrupt and economy in a hole.

There is little clarity on how the collapsed economy will be rebuilt. Foreign exchange is needed immediately. The two biggest crises are fuel and food shortages. On July 6, Colombo announced it was suspending interest payment on $175mn sovereign guaranteed bonds of Sri Lanka Airlines and would be unable to pay interest on loans taken to build a China-backed airport and expand a runway. Foreign residents and tourists have been asked to fill out forms for fuel. Most petrol stations are dry as the country awaited a fuel tanker on July 10. Critical surgery is on hold as hospitals are facing long power cuts.

Tamils did not take part in these protests but Muslims did. This is a turning point in Sri Lanka’s history. The debate from the start was: What should take priority — economics or politics? The message from Aragalaya protestors is: fix politics first. Soon after the 2006 Maoist revolution, Mahinda visited Kathmandu. Nepalese feared that he had come to save King Gyanendra and monarchy as Rajapaksa, translated in Nepali, means “Raja ko paksa” — in favour of King. Mahinda did not know he and his clan would shortly meet a similar fate. Thankfully SLA has stayed out of politics. Its loyalty to the Rajapaksas had been overestimated. Gota was always a reluctant politician and ran for President due to 20th Amendment which prevented Mahinda from a third term. The political demise of the Rajapaksas will make a good study on the rise and fall of political dynasties.

India must play its cards cautiously. It has reiterated its policy is dictated by interests of Sri Lankan people and humanitarian concerns. There is no quick fix to the national crisis but for India, while it is time to wait, certainly not just to watch.

(The writer, a retired  Lt Gen, was Commander, IPKF South, Sri Lanka, and founder member of the Defence Planning Staff, currently the Integrated Defence Staff. The views expressed are personal.)