There are leaders who just cut and run

There are leaders who just cut and run 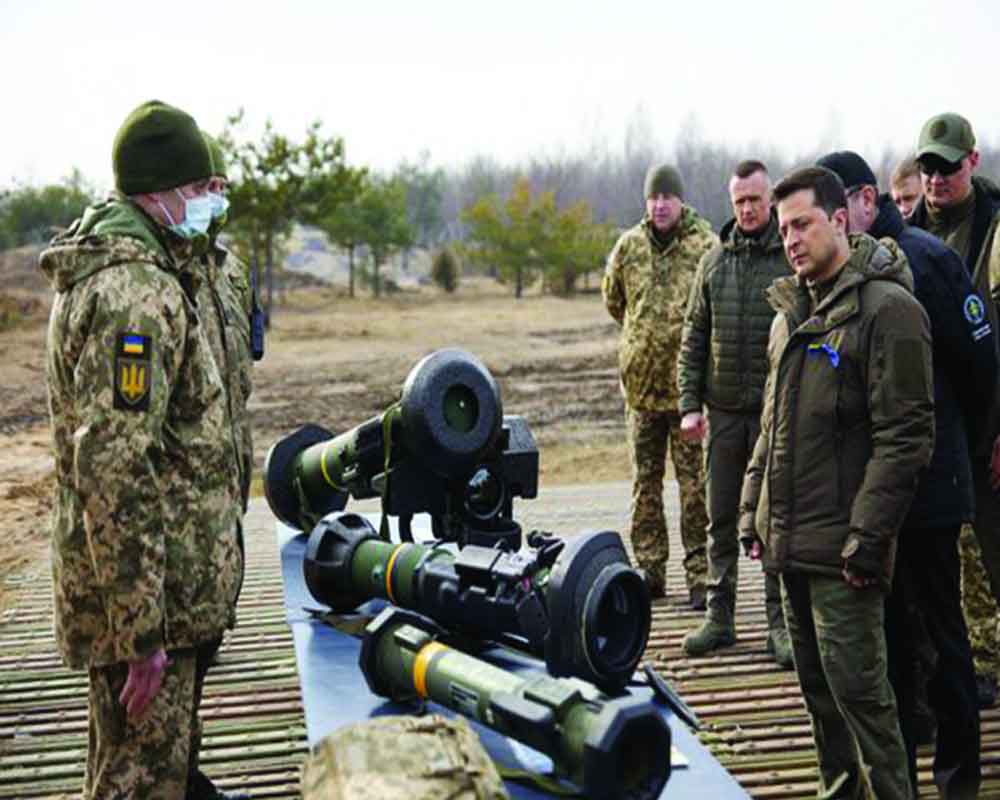 Unlike Afghan ex-President Ashraf Ghani, Ukrainian President Zelenskiy is fighting back though he too is up against a formidable enemy in Putin

American bravado insists, ‘Marines don’t cut and run’ — but they were virtually made to, very recently in Afghanistan. They left rather unceremoniously at night, unannounced and after putting out the lights! After 20 years, thousands of lives lost and an estimated $2 trillion burnt, the perennial battleground since the time of Alexander the Great outlasted and out-fatigued the most powerful military in the world. US Marines, who pride themselves as ‘The Few, The Proud, The Marines’, may not have personally thrown in the proverbial towel but their national leadership had had enough, politically, psychologically and financially. The last American soldier to leave Afghanistan was ‘Flatliner’ or Maj Gen Chris Donahue — the forlorn image of him in fatigues, helmet and carrying a rifle with night-vision optics, stepping onto the transporter aircraft was captured for posterity. A poignant moment for the General of the 82nd Airborne Division who had himself insisted on the ethos of his Division where ‘Leaders jump first, eat last. Always’. He may have well added about truly inspirational leaders that they are also expected to be ‘the last to leave’.

However, that is not so for political leaders, often. Both President Joe Biden (who executed the withdrawal) and his predecessor, Donald Trump (who had inked the withdrawal agreement), were amongst the minority 17 of the total 46 Presidents of United States of America to date who had not served in the military. Usually, military folks don’t like the idea of ‘withdrawal’ without achieving objectives, and it was the same discomfort against the abrupt withdrawal of US troops from Syria-Turkey border by Donald Trump that led to his ‘Veteran’ Defense Secretary James Mattis to finally bite the bullet and tender his resignation. For a professional combatant who had made his reputation as a revered warrior, retreat was dishonourable.

One contrasting leader in the land of wars was former Afghan President Ashraf Ghani — an academician who was sadly consumed by his own intellect to an extent that he cut himself from reality, politics and power structures that are needed to control Afghanistan. The insecure politician in Ghani reconfirmed the timeless wont of empty talk as he spent the last few weeks before abandoning Afghanistan thundering that he’d “fight to the death”! Apparently, Ghani had reconfirmed his supposedly resolute intent to US Secretary of State Antony Blinken just the night before he fled unheroically, leaving his people to their fate. Unlike almost all other Afghan leaders who had taken to the gun at some stage in Afghanistan’s bloody history, Ghani was an academician-turned-politician and not a professional of arms. His own deputy, Amrullah Saleh, a former Mujahideen fighter and later spymaster, had slammed Ghani’s cowardice as “disgraceful”. Naturally, the likes of Saleh remain the last few vestiges of hope in the fightback against the Taliban. Not only had Ghani, to use the American phrase, ‘cut and run but had apparently done so, even more despicably, with stashes of money. He will spend the rest of his life justifying his ignoble actions in vain as the history is already written on this one.

Merits of the debatable Russian-Ukrainian positions aside — contrast the personal leadership styles as currently exhibited in Kiev by Ukrainian President Volodymyr Zelenskiy with that of Ghani earlier. Like the non-military man in Ghani, Zelenskiy, too, is a civilian politician with a past in the entertainment industry and business. He too is personally up against a formidable enemy in Vladimir Putin but the difference in resistance and fightback is palpable. Despite emerging as the singularly most sought-after target in the ensuing battlefield of Kiev, Zelenskiy’s turning down of the offer from the US to evacuate with the statement, “The fight is here; I need ammunition, not a ride”, is starkly different from Ghani’s. The impact of such leadership is obvious as, unlike the surreal and complete capitulation seen in Kabul last year, Kiev has put up an unbelievable fight against Russian might. Announcement of Putin’s ‘special military operation’ in Ukraine has been anything but a walk in the park, and largely so owing to the character displayed by the Ukrainian leadership so far.

The Russians themselves are conversant with their own super-heroic spirit of never-say-die with the 872-day siege of Leningrad (St Petersburg) — ironically by the Nazis, who were incredulously re-invoked by no less than Putin in Ukraine today. Hitler’s ‘Operation Barbarossa’ had also entailed a surprise invasion with a dastardly intent to destroy and starve the enemy into submission, but the indefatigable human spirit and history of the Russians deemed otherwise.

However, many autocrats who spew brave words when in power cut a sorry figure when exposed to the brutality of war. Iraq’s Saddam Hussein who had famously warned of “mother of all battles” was ultimately pulled out bedraggled from a hole whereas his even more theatrical co-dictator in Libya, Muammar Gaddafi, was pulled out of a drainage pipe. Both had fled after insisting that they wouldn’t. Reality is war talk is always cheap — actual war isn’t. It was not so in Leningrad, Iraq, Libya or now in Ukraine. Leaders who posture political muscularity often aren’t, they are usually the first to cut and run.